Costumes make for a grand spectacle 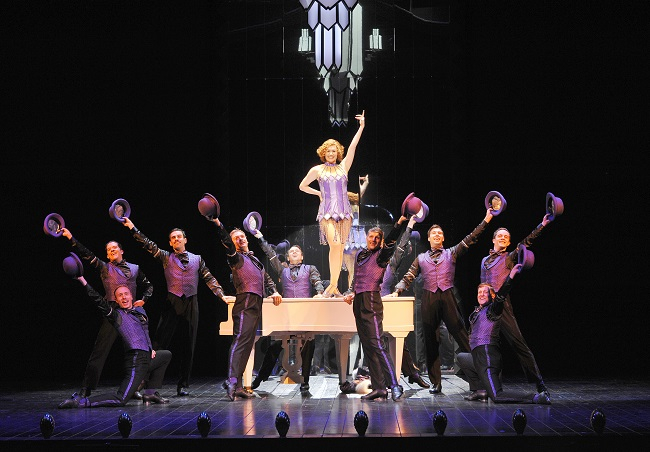 production of 42nd Street at Théâtre du Châtelet, Paris in 2016
By Samantha David

A spectacular new exhibition of costumes from musical shows is running at the National Centre of Stage Costume in Moulins until April 28th, including more than 100 glittering costumes from shows like My Fair Lady, The Sound of Music, Cabaret, Grease, Cats, and The Phantom of the Opera.

The exhibition retraces the history of the musical through the costumes on display, and how so many shows which were first staged between the wars in the US have been so ultra-successful in France over the past decade or so.

It also gives visitors a chance to experience what it is like backstage in a theatre where a musical is being staged thanks to an original, interactive design allowing visitors to see costumes being delivered and fitted, as well as exploring make-up, hairdressing and dressing rooms, right through to the final spotlight.

Musicals have their roots in operettas, music halls, variety, jazz and ‘opéras-comiques’. Born on New York’s Broadway, brought up in London’s West End, they arrived in France during the 60s, with cult films like West Side Story and My Fair Lady.

Later on, French musicals Les Parapluies de Cherbourg and Les Demoiselles de Rochefort spread the news and the late 1990s saw several hit musical French productions including Notre-Dame de Paris, Roméo et Juliette and Les Dix Commandements and for the last decade or so Parisian theatres have been running sell-out productions of musicals including The Lion King, Grease, 42nd Street, and Singin’ In the Rain.

“Musical comedy is very much an American and British art form,” says exhibition curator Delphine Pinasa. “Even now, French musicals tend not to have dancing, and they treat very serious themes. Broadway and West End musicals are escapism, they are feel-good. But French culture is generally more serious, the themes are more tragic.”

The costumes belonging to the museum cannot be on constant display as they are very fragile, which is why the museum mounts a new temporary exhibition every six months. “We wanted to introduce more French people to musical comedy, to the notion of tap dancing and comedy all being part of the show,” says the curator. “It really isn’t a very French thing, despite the sell-out shows in Paris, which are often directed and designed by British people. French actors don’t routinely learn to sing and dance, they aren’t expected to be able to do everything. Dancers dance, singers sing, they are seen as separate disciplines.”

For more details of the exhibitions Musicals, The Costumes Stage their own Show! – including opening hours, prices and how to get there – see www.cncs.fr.

Can I kick it? Yes you cancan

To kick start your exploration of French musicals, and tempt you to further exploration, here are five of the best:

French Cancan (1954): Jean Gabin stars as Montmartre nightclub owner Henri Danglard, who is trying to rescue his flagging fortunes by building the Moulin Rouge, and reviving the cancan starring Nini (from the laundry).

Les Parapluies de Cherbourg (1964): The film which made Catherine Deneuve an international star is almost entirely sung, like an opera and there is no dancing. Geneviève’s widowed mother owns an umbrella shop in Cherbourg, and does not approve of Geneviève’s car mechanic boyfriend Guy...

On Connaît la Chanson/Same Old Song (1997): The plot follows the intertwined lives of six Parisians including Odile who is flat-hunting, and her sister who is in love with an estate agent. The characters lip-synch 36 of France’s most-loved and best-known songs