Diary of a Body 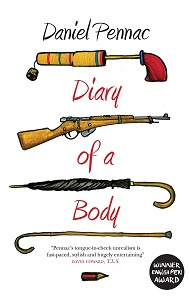 SEEMINGLY the tale of a man’s life as told through his bodily functions and malfunctions, this book could be something that Billy Connolly would use as source material – if he had not already made full use of all bodily functions.

Telling the story of a man growing from the age of 12 to 87, from 1936 to 2010, this is navel-gazing taken to the extreme and, often, to extremes that Connolly himself would have laughed at.

It all but ignores one of the most intense parts of the history of the time, apart from references to his experiences in the Resistance, and reveals that his only concern at the time was “staying alive”.

But it is the ordinary that he makes extraordinary... “I sliced my thumb as I was fixing a flat tyre. The screwdriver slipped, slicing my thumb like a crayfish. One of those pains that go straight to the heart.”

Or when Violaine, a friend’s sister, comes to his room in the middle of the night and as he gets undressed he feels his blood “pumping my blood everywhere except where it was expected, my blood lit my cheeks on fire, splattered the sides of my skull, beat wildly at my temples, but not a drop came between my legs, nothing.”

Wild and, in places, uproarious this is the perfect antidote for anyone feeling not quite themselves.