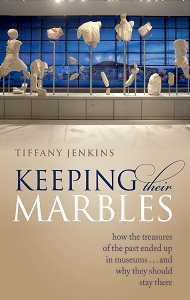 FROM the Louvre to the British Museum and the Metropolitan in New York, some of the world’s most fabulous collections of historic treasures are being bombarded with demands for the artefacts to be returned to their ‘home’ countries.

With the horrors, both human and archaeological, being unleashed by Daesh at both Nimrud and Palmyra in the Middle East this timely book looks at how historic art ended up in the likes of the Louvre and why the  artefacts should not be sent back.

France, with Britain, is seen as one of the world’s great historic ‘looters’ but many of the art treasures in the Louvre and other smaller museums came from the fall of the king.

As monuments and works associated with the Ancien Régime were being destroyed, an argument rose that true liberty was based on education and that preserving heritage was a value of civilisation.

This led to a Musée Français being created a year after the storming of the Tuileries with the aim that treasures “which were previously visible only to a privileged few... will henceforth afford pleasure to all”.

Jenkins uses the example of the Elgin Marbles in London to show how historic artefacts reflect not on the modern state that demands their return but on the civilisation that created them.

She also looks at how their present position, in a historical context in the British Museum, improves understanding. “At the British Museum, the placement of the Marbles draws out the inspiration for the Parthenon sculptures, and underlines what they, in turn, inspired.”