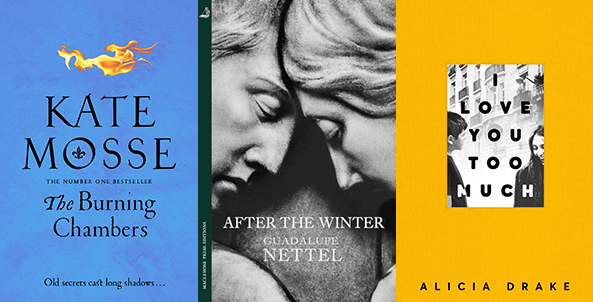 All the horrors of the Wars of Religion come to life in the opening pages of this, the first in a centuries spanning trilogy by Labyrinth author Kate Mosse.

A history lesson on the wars which raged in the latter part of the 16th century, a confusing prologue in southern Africa, the nightmare of the Inquisition in Toulouse and then a bad dream in Carcassonne sketch the tale ahead.
But, initially at least, it is a very rough sketch and quite confusing... with tantalising glimpses of the story of bookseller’s daughter Minou Joubert and Huguenot convert Piet Reydon.

A love story of a Catholic, a Protestant and a priceless relic as they try to unravel the secret of the mysterious Château de Puivert, this book revels in tangled loyalties and the threat of betrayal.

Nineteen year-old Minou is opening her father’s bookshop when she finds a letter addressed to her by her given name of Marguerite lying on the doormat. The letter inside has just five words: “She knows that you live”.

Piet is at confession when he realises that soldiers are also in the church and are hunting him. As the bells chime the hour he makes a break for the door and escapes into the maze of Carcassonne streets. There is terror in the Midi streets...

Leading travel writer Rick Steves has done much to tell Americans how best to enjoy Europe. This updated version of his France guide is a dense companion chock-full of information on his pick of the places to visit, eat and sleep.

Incredibly detailed, it gives useful tips on where to go and when, with handy local maps – but not how long it will take to drive between sights and that can sometimes decide which ones to visit.

The map of “top destinations” in his overview contains a startling omission… Paris, Alps, Burgundy, Lyon, Provence, Riviera, Brittany, Normandy, Dordogne – but no Bordeaux. Perhaps Mr Steves prefers Burgundy, but despite having a TGV train link that puts Paris just two hours away, Bordeaux is only mentioned in a two-page entry on St-Emilion.

He may have mislaid the ‘B’ page from his notebook as he has no Bayonne, Biarritz, Basques or the beaches that run for dozens of miles up the Atlantic coast.

Elsewhere, however, it is hard to fault his dedication to saving the visitor from over-spending and finding the best ways to enjoy life almost like a local.

There are fewer photos than in other guidebooks, but that’s what the internet is for and the information here is invaluable.

This is a Paris seen from an insider’s viewpoint, a young boy unhappy with himself and the world; ignored but all-seeing.

Unloved in his mother’s new relationship and with a father who lives to work – and criticise Paul’s schoolwork – he is being brought up by the family maid. Unloved and overfed.

Paul has a different view on life, he is coming into his teens in what seems like an unchanging city but where everything is falling apart round him… especially with the arrival of a new ‘sister’

Meeting his first friend, Scarlett, his feelings start to shift but she has a hunger for excitement, even danger, leaving Paul with his loneliness, the stench of abuse and a fear of what will come.

The writing alone pulls you along as well as Paul’s quirky take on life but this is not a fun read. Extraordinary but dark.

Neuroses and passions collide as shy Mexican woman Cecilia moves to Paris to study literature and meets obsessive Cuban Claudio, a dark, misogynistic character that should be instantly unlikeable but is not.

Cecilia is fascinated by funerals and French literature – the former, since discovering a grave in her grandmother’s yard, the latter from the bequest of a library near her home.

She is the type of woman who buys a bicycle to get round Paris and then takes it on the RER and who is delighted when she takes a flat with a view over Père Lachaise graveyard.

She meets sickly young Tom and he persuades her that the dead are part of us, living on inside us. She is left in despair when he moves away. Then Cecilia and Claudio meet by chance and it is a whirlwind of emotion and phobias as their natures collide and drive them on.

A murder mystery and mouth-watering trip to the bouchons of Lyon as food writer Laure Grenadier visits the foodie capital for a magazine article.

A snapshot of a past age is given on the opening page as the cook is chopping up rutabagas – the good old swede or Scottish turnip – to feed the troops and using a vegetable that vanished from French kitchens in the post-war years as people were tired of it.

Then straight into the modern day, where a chef has dumped traditional butter-rich recipes for oil and is repaid with an intruder’s rolling pin to the back of the head.

Laure is shocked. The chef was a close friend and she was due to visit him… and she is naturally curious, so does some detective work of her own.

But the murder and the second that follows – yet another on Laure’s list – soon after are mere background here, where the food is the key. Tantalising menus and a diet regime to treat gourmands for obesity and even a recipe that will put all the weight back on… wonderful.

In its way, this is a foodie’s guide to Lyon: some of the best names and addresses – a real taste of the city and a real flavour of its lifestyle. With a murder mystery thrown in for spice.