The Life of Elves 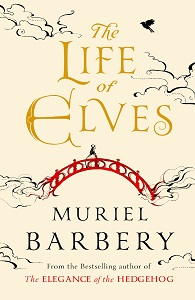 YOU MAY be enchanted from the very first page... telling of a little girl who loves to sit in trees summer and winter and who seems to have a ‘magic’ about her, intelligence that surpasses her perception.

But, as unexpected snow falls, she is missing when her family flee home and her father goes round the Burgundy mountain village telling the sheltering neighbours: “The wee girl has gone missing.”

Later, none of the villagers could remember what they had seen when they found her; just that she was standing in a clearing in the middle of the blizzard, talking to ‘some creature’.

Maria, with “eyes like two sparkling obsidians” had been discovered in the woods when she was a baby and has an uncanny way to communicate with nature and, we discover, was found at the same time as another strange little girl, Clara, who is growing up in Abruzzo, Italy.

The secret world of elves starts to interest them and they discover that the forces of good and evil that are starting a new battle, a battle that brings even the seasons into disarray.

As humans prepare to face the fight – mountain peasants armed with just memories of mountain lore and the old ways – Maria and Clara must find a way to use their links with nature and music to help defeat the evil elf who is battling in both elf and human worlds to end the peace of harmony.