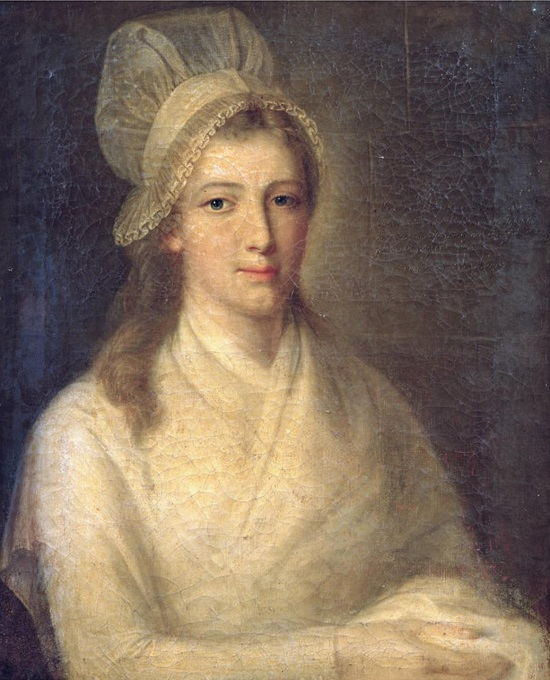 Was Charlotte Corday misguided? Insane? Politically naive? Or was she just a murderess, plain and simple? It’s undisputed in fact, that she did murder Jean-Paul Marat as he lounged in his bath. But what kind of woman kills a man she hardly knows because she disagrees with his politics? Much as we might dream of murdering certain politicians, it’s a fantasy not a plan.

“Her actions have been interpreted differently by various people over the years,” says Alain Chevalier, the curator of the Musée de la Révolution Française in Vizille, just south of Grenoble. “She was provincial, a small-town aristocrat, well-educated and felt she was on a mission to save ‘The People’. I think she was vulnerable, fragile in her thinking, not really capable of following all the details of an argument. She thought that by killing the voice, you could kill the message.”

Marie-Anne Charlotte de Corday d’Armont was born in Normandy in 1768, into a family of local aristocrats. After her mother’s death, she and her sister were packed off to a convent school in Caen, where she read her way through the library. So we can deduce that her childhood was probably not filled with close warmth and love.

In 1791, two years after the French Revolution started, she left the convent and went to live with her cousin, Madame le Coustellier de Bretteville-Gouville. She was 23 and like everyone in France at that time, followed news of the Revolution avidly.

In the two years since the overthrow of the monarchy, radicalism had reared its ugly head, and different factions had emerged with varying ideas on which direction the Revolutionaries should take. The Girondins (so-called because many of the faction’s leading lights came from Gironde in south-west France) were for ending the monarchy, and for spreading the Revolution internationally via military action (against the Rhineland, Poland, Netherlands, Austria and eventually Britain, Spain and Italy) but against burning chateaux and against executing anyone suspected of being an ‘enemy’ of the Revolution.

It is easy to see why this stance would appeal to Charlotte. She was a democrat and a republican, but her background, albeit not fabulously rich, was aristocratic, her education thoroughly classical, and she was in line to inherit her cousin’s estate. She had not approved of the execution of King Louis XVI and as she listened to the Girondins at their meetings in Caen, she became a strong supporter of their faction.

Initially, the Girondins had been pretty much in step with other groups including the Montagnards and Jacobins (who both took an extreme view about stamping out resistance to the Revolution) but gradually they were side-lined and in May 1793, the Montagnards, led by Robespierre, took control of the government and the Reign of Terror began.

Their aim was to kill anyone who might oppose them, superficially in order to consolidate the Revolution, ward off any possible civil war, and to stamp out counter-Revolutionaries and their sympathisers. It is impossible not to note, however, that as a convenient side-effect it would also wipe out all political opposition and hand almost absolute power to the Jacobins.

Charlotte Corday was horrified by this State-sanctioned violence, and felt that it was a step towards destroying the soul of France. In her mind, the radical journalist Jean-Paul Marat, who had called for and approved of the killing of thousands of prisoners in the 1792 September Massacres, was directly responsible for cultivating and spreading these radical ideas. His publication, L’Ami du Peuple (The Friend of the People) was the Jacobin’s loudspeaker to the ‘sans-culottes’.

A doctor, scientist and political theorist, Marat was then 50 years old and uncompromising in his views. His background was poor, his childhood education scant, but his drive, hard work, and ambition had elevated him through society. He had spent many years living in Britain, and returning to France in 1777, he got the job of physician to the bodyguard of King Louis XVI’s youngest brother.

He used his handsome salary to pursue various scientific studies but fell foul of other scientific experts who did not always agree with his findings. He attempted to disprove Newton’s theory that refracted white light breaks down into seven colours, for example.

On the eve of the Revolution, perhaps seeing it coming, he abandoned science and medicine to enter journalism and politics, becoming a powerful Jacobin voice and calling for the use of violence against the monarchy and the Girondins.

The times were turbulent; during the upheaval and chaos of the Revolution, Marat was several times forced to hide in the sewers of Paris, and at one point he was arrested. But he did not care – throughout it all, he kept to his radical opinions.

From Caen, his voice was so loud that it seemed as if he were the star of the show, rather than the leader of the claque. To Charlotte Corday he seemed to be the head of the serpent. If he were eliminated, untold thousands of French lives would be spared and some of the choppy waters would be calmed. A more moderate and reasonable, Girondin, version of the Revolution would triumph.

So on July 9 1793, Charlotte Corday travelled to Paris, where she bought a 6-inch kitchen knife and set about tracking Marat down. She had initially considered killing him in front of the National Convention in order to make an example of him, but he no longer attended meetings there. So she went to his home, claiming to have details of a Girondin plot in order to gain admittance.