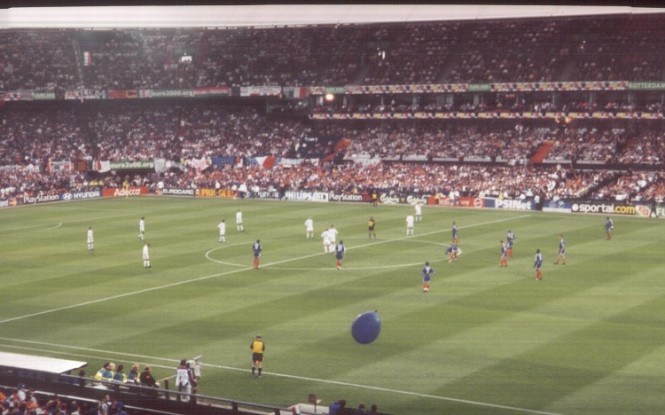 France's football heritage is pure Jekyll and Hyde. There have been champagne moments — from the golden generations of the 1950s and 80s, to the poetry of the 1998 World Cup win.

But darker days, such as a mid-World Cup meltdown in 2010 and, more recently, the sex-tape blackmail scandal that cost striker Karim Benzema his place in the French squad for this summer’s tournament, suggest a split personality.

The French team, nicknamed Les Bleus, was created in 1904. They played in the first World Cup of 1930 and scored the tournament’s first ever goal. But fans had a long wait before a team emerged that was capable of great things on the world stage. That group of players was the team of 1958, led by the legendary Raymond Kopa, a quick and intelligent playmaker with an eye for goal. In front of him was another superstar of the era, a forward named Just Fontaine.

With expectations at zero, the French took the 1958 World Cup in Sweden by storm, playing a dazzling brand of attacking football. Their tournament came to an unfortunate end against Brazil in the semi-finals after injury reduced them to 10 men — teams could not bring on substitutes back then. Fontaine won the tournament’s golden boot with 13 goals, a tally that is unlikely to ever be beaten.

But the success of ’58 failed to open the floodgates to further success. It would be another three decades before France found an heir to Kopa — in Michel Platini.

“The most important thing about the history of Les Bleus is that every time we did something good, we had one incredible player.

“We waited for Platini to arrive before we had another great French team. He was instrumental in that wonderful era in the 80s.”

The team was defined by Platini’s flair and elegance. Alongside Jean Tigana, Alain Giresse and Luis Fernández, the celebrated midfield became known as the carré magique, or the magic square.

After heartbreak at the World Cup in 1982, losing on penalties to West Germany in the semi-finals, two years later, playing with panache and style, they won the European Championships on home soil. Platini was majestic, scoring nine of the team’s 15 goals.

“After ’84, we had to wait for another very special player,” said Mr Laurens. “But he was worth waiting for.”

That player was Zinedine Zidane. A second-generation Algerian immigrant, from one of Marseille’s most notorious neighbourhoods. He defied the challenges of his childhood to become the most mercurial of players. His extraordinary talents led the French team to their greatest glories — a first World Cup win, in France in 1998, and the European Championships for a second time in Holland in 2000.

“Winning the World Cup in ’98 was very special,” said Mr Laurens. “Memories like that stay with you forever.”

France destroyed Brazil 3-0 in the final. The victory united a nation of diverse communities that had never before demonstrated the same passion for football as Italian or English fans.

While victory was sweet, it came without the panache of previous generations. But in the Euros in 2000, with the addition of David Trezeguet and Thierry Henry, the French team served up football that at last had a splash of the champagne of Platini’s generation. They won the final in dramatic fashion, with an extra-time golden goal.

Apart from wonderful lynchpins in Kopa, Platini and Zidane, what else unites the great French football teams?

Former Monaco president Jérôme de Bontin said: “While there was no consistent tactical approach, what is common is reflective of a French society that has always benefited from diversity.

“Just Fontaine was from a family that moved had back to France from Morocco, Platini’s family was of Italian descent and Zidane’s origins are from Algeria. I also like to believe that if you were to take the time to look at footage of those three periods, you would find some commonalities of attacking soccer, panache and unique talents.”

Like most nations, the French team has had its share of temperamental players with the potential for controversy.

“There’s no doubt the World Cup in South Africa in 2010 was the most controversial, disgraceful and humiliating event in the history of French football,” said Laurens.

“We had players going on strike, refusing to train and protesting about Nicolas Anelka being sent home. It was hard for fans to deal with.

“I think it started in the 2008 Euros with the new generation of young players.

“Players like Samir Nasri, Benzema and Hatem Ben Arfa didn’t have much respect for the older players, for the institution or the shirt.
I think that’s what led to 2010.”

The problems did not end there. In 2012, Nasri insulted a journalist and a fight almost broke out in the French dressing room. And Benzema would surely want to rewind that sex-tape scandal.

Mr de Bontin feels there is an unfair focus on problem players. “There’s really just a short list of players who make the headlines for the wrong reasons,” he said.

“The issue is linked to the money that some of those players make early on, which is disproportionate to the rest of society. Most of those young men are ill-prepared to deal with the impact of their fame.

So what of French hopes for this summer’s tournament, which takes place amid a state of emergency following November's terror attacks?

France are back on home soil, just as they were when they lifted major trophies in ’84 and ’98. “Home advantage is a real asset and it will favour the French team, but I do not believe that France will win,” said Mr de Bontin.

“The only slight weakness is a lack of experience at this level,” said Laurens. “But overall we’ve a very talented young squad, and lots of the players in Didier Dechamps' squad are having fantastic seasons with their clubs, such as Hugo Lloris, Paul Pogba, Laurent Koscielny and Antoine Griezmann.

“They could get to the Euros with players full of confidence and momentum. So I’d say I’m pretty confident!”