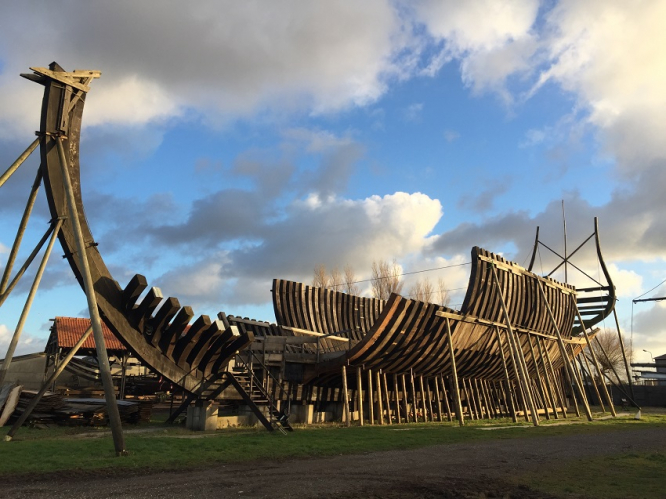 The Jean Bart is a recreation of a 17th century warship named after a Dunkirk-born admiral.

The project in Gravelines, between Calais and Dunkirk, echoes the building of the Hermione, a replica of an 18th century frigate that joined the US war of independence.

It employs young people and teaches them crafts and skills, as well as passing on local history and maritime culture. It also attracts tourists to boost the local economy.

The project is the dream of Christian Cardin, who says the inspiration was a history lesson at school on the sea battle of La Hougue as King Louis tried to restore his cousin to the English throne.

In 1692, Admiral de Tourville, in command of 44 French navy vessels, was beaten by the English and their Dutch allies.

The French fleet ran aground off the Normandy island of Tatihou and lost 15 ships. Mr Cardin said: “As an adult, I became a geologist and a diver, and searched for the wrecks off Saint-Vaast-la-Hougue.

Finding the ships was one thing, figuring out what to do with them was another. “I founded the Tourville Association, and eventually in 1992 a museum was opened to house the items we recovered from the wrecks.

“I realised I wanted to build a ship. Not just so I could have an expensive hobby, but so that we could learn how they were built, and transmit all kinds of knowledge to younger generations.

“The first thing we had to do was find a site for the shipyard. We wanted a legitimate site, ie. a place where ships were traditionally built, and with enough people to achieve the project.”

As a major port for centuries, Dunkirk was an obvious choice but it is now a huge industrial centre with no space. “Gravelines was close by and had the history, so we chose that.”

Persuading the authorities was not easy. “They all thought I was mad. But I got there in the end,” Mr Cardin said.Building the Jean Bart is a mammoth task. It will be 57m long, 15m wide, 17m high at the poop deck, and have a draught of six metres, with space for 700 people and 84 guns. It will need the wood of 3,600 oak trees.

The next problem was that there were no plans to build from.

“In the 17th century the knowledge was passed down from master to apprentice, there were no written plans. There was just one document, L’album de Colbert, which described building a vessel with 80 cannons, but it had no measurements.

“So we measured the wrecks we had discovered and got marine architects at Nantes University to draw up some proper plans. It was a puzzle but we did a massive amount of research.”

Although it is trying to reproduce 17th century building methods, the association does use electric tools, with computers to draw up the plans.

“We have to respect health and safety regulations but also try to be as authentic as possible. We make our own nails in the forge here, for example. So it’s very traditional. But what we want to be authentic is the ship we are building, rather than the methods.”

“At first, people thought the project was too long-term – 25 years doesn’t interest politicians – but now they are interested. We worked with the Medway Queen Preservation Society in Chatham, who also reconstruct period vessels, and with another shipyard in Belgium as an EU project.”

He added: “We use everything, and waste nothing. We have built a tavern, a shop and a fish smokehouse using the wood left over from the vessel, and the off-cuts and sawdust are used for firewood and for smoking fish.

“In the 17th century, there would have been 1,000 people working, including 250 carpenters, and it would take three to four years to build.

“A whole village would spring up – apart from the people directly involved in shipbuilding, there would have been all sorts of cooks, and others.”

When finished, the ship will be moored in Gravelines as a historical monument, but it will not be sailed because it will not have a motor or any modern navigation equipment.

Tavern, shipyard, village and workshops, plus the smoke-house and the shop, are all open and can be visited – see tourville.asso.fr. Mr Cardin said: “Tell readers to visit. It’s fascinating, and the best way to learn about history. Also, follow us on Facebook. It’s fun!”