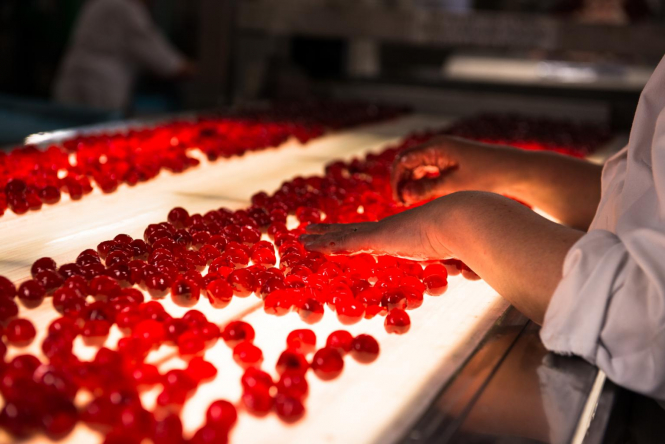 The town at the centre of this sweet speciality is Apt, Vaucluse, where they have been perfecting the techniques for centuries
By Jane Hanks

Candied fruits are a real treat during the festive season, traditionally used in Christmas puddings, cakes and mince pies in the UK, but also on sale throughout France in December and included as one of the thirteen desserts for the traditional repas de Noël in Provence.

Provence is renowned worldwide for its candied fruit

This is hardly surprising as Provence is renowned worldwide for its candied fruit. The town at the centre of this sweet speciality is Apt, Vaucluse, where they have been perfecting the techniques for centuries. Local cherries, melon, apricots and pears are all transformed in this way and more recently Corsican clementines, citron (cédrat in French), and pineapple.

The Romans first discovered this way of conserving fruit, but as sugar was not available, they used honey. Cane sugar was used when it was introduced into France during the Crusades in the early Middle Ages.

It is likely the technique came to Provence from Italy when the Popes settled in nearby Avignon during the 14th century, and wanted to be served with fruit all year round.

Pope Clement VI chose a man from Apt, Auzias Maseta, to be his escouyèro en counfisarias, candied fruit expert in 1342. Throughout the centuries there continued to be references to the production of candied fruit in and around Apt.

In the early 20th century production increased with the invention of steam and electricity which meant greater quantities could be prepared at a time. In the 1930s there were 11 factories and 600 employees. The UK was a particularly good customer and in 1932 2,400,000 kilos were exported there.

With the introduction of cheaper beet sugar, other countries began making candied fruit, and production at Apt dwindled.

To save the traditions and skills, several family firms joined forces in 1962 to become the Aptunion, which in 1988 became La Maison du Fruit Confit. It is the biggest producer of fruits confits in the area with 185 employees making 10,000 tonnes a year, of which 5,500 tonnes are cherries, called glacé cherries in the UK.

Its Managing Director is Benoît Rougier: “Apt became the centre of excellence for this technique, because it is in the heart of the orchards of Provence and the melon fields. The area is particularly well known for its cherries, which make up over half of our production.

“It is also not far from Avignon, which was home to the Popes. We have managed to keep our skills and though we produce in large quantities and export all over the world, everything is done by hand using expertise gained over centuries of experience."

“We have been awarded the Entreprise du Patrimoine Vivant, given to companies which are recognised for their traditional savoir-faire.”

He says making the fruits confits requires close monitoring at every stage: “Some of our customers say they have tried to make candied fruits themselves at home, but they can’t make it taste quite the same, so they come back to us. “A candied or crystallised fruit is not the same as a sultana or raisin which has been dried. In candied fruits the water content is drawn out and replaced with a sugar syrup which conserves the fruit; the reason why it was originally invented. They are best eaten within a year, but will last and remain edible for much longer.”

The first step is to sort the fruit: “When it arrives each fruit is assessed for sugar level and acidity and only the best are selected. They are then peeled, the seeds taken out if necessary and cut. All this is done by hand, so it is labour intensive.

“The fruit is then blanched in boiling water which makes it permeable. It is then put into a syrup for around ten days at a temperature of 60°C, and at the end of this process the sugar should have been absorbed right into the heart of the fruit. During this period the fruit must be stirred regularly so there is even distribution of the syrup throughout. It is then drained on racks.

“For those that are not going into cakes and pastries there is an additional stage when each fruit is covered with a thin layer of sugar solution which makes it attractive to look at and means it is not sticky when you handle it.”

Just as in the UK, candied fruits are a part of the festive season: “Thirty per cent of our sales are at Christmas,” says Mr Rougier. “Candied orange and lemon dipped in chocolate is very popular during this period.

However, candied fruit is eaten all year round in Provence in traditional local dishes. Calissons are made from candied melon, we have our own fruit cake, and the Galapian.”

The Galapian was created by a local pastry chef, Alain Bouchart for a competition in 1995 to find the best way to include candied fruits in a recipe. He won, and now the Galapian is a tradition throughout the town. It consists of a pastry case lined with candied melon and topped with a mixture of powdered almond, egg whites and sugar which is then decorated with more candied fruits of your choice.

Mr Rougier says their fruits confits have always been popular, and continue to be so as customers increasingly seek out quality, hand produced food products.

They only sell via their onsite shop where there is also a museum tracing the history and showing how the fruits are prepared, or via their website. They have customers, not only in France, but all around the world, including Germany, the UK, Australia and the United States.