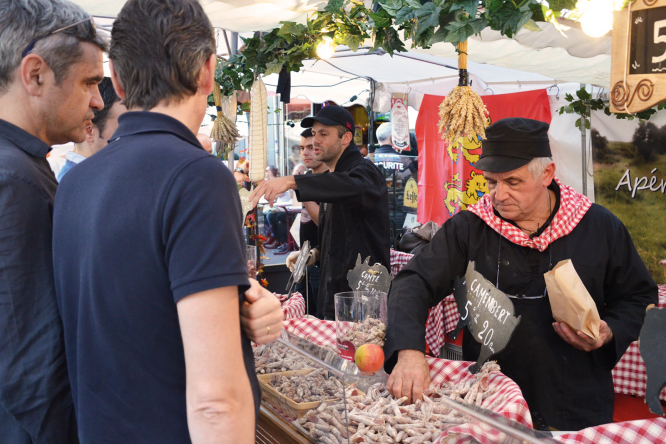 Rouen has been named a Unesco Creative City for gastronomy – the only place in France to have the accolade.

Unesco’s Creative City network has categories for crafts and folk art, design, film, gastronomy, literature, media arts, and music, and was launched in 2004 to promote cooperation between places recognising creativity in urban development. It has 295 cities, with two from France: Cannes for film, and Rouen for its gastronomy.

Amélie Nielsen, in charge of Rouen international cooperation, said gastronomy in this sense has a broad definition.

“We are not just talking about gastronomic dishes and Normandy cream, cheese, apples and cider, but the food chain and everyone involved, from the seed or animal to the plate.

“We had to show the city is active in promoting quality local products sustainably, from the way they are produced to the way they are made accessible to all sectors of the population, from children to the elderly and to all economic backgrounds – as well as having excellent restaurants and major food events, like the annual Fête du Ventre and festival of gastronomy.”

She said 81% of food served at Rouen schools is local, with 27% organic and 39% from sustainable agriculture.

“The idea of the creative city network is for members to share experiences, so other towns all over the world can learn from us and we can learn from them,” Ms Nielsen said.

Rouen had to submit a four -ear programme of ideas at both national and international level and the results are noted at the end of this period before starting a new four-year plan.

“It is a real honour for Rouen. The adventure, though, has only just begun.

“Now there is a lot of work to make sure we make the most of the opportunities which come from being in an international network.”

Missions Locales: Unemployed youngsters in France thrown a lifeline
2 December 2021
More from Culture
More from Connexion
Get news, views and information from France
Join the newsletter
Subscribe to The Connexion