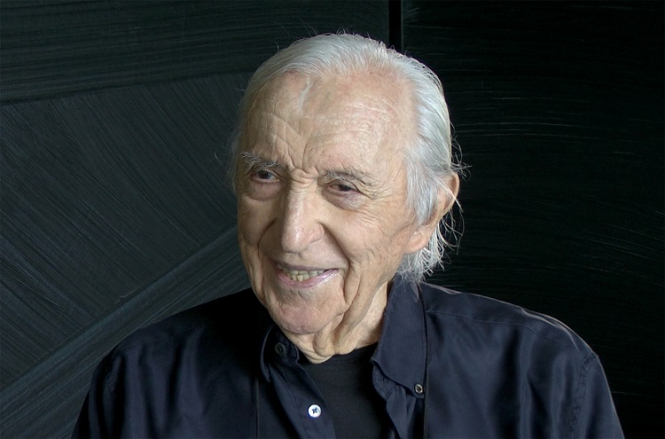 The 100th birthday of France’s most famous living artist, Pierre Soulages, provides fans of his outrenoir, all-black works, plenty of viewing opportunities: the Louvre and Centre Pompidou are running major exhibitions until March 9.

Soulages (main picture above, in 2019) was born on December 24, 1919 in Rodez, and his fascination with black ink and paint began at an early age.

An aunt revealed that one day she saw Pierre, as a child, standing in front of a blank sheet of paper, dipping his pen in black ink. She asked him what he was drawing. “Snow,” replied the little boy.

Soulages’s works have become much sought-after – a 1960 piece fetched €9.6million at auction last November, a new record for the artist.

2. A museum for Hallyday fans?

Laeticia Hallyday, the widow of French rocker Johnny Hallyday who died in December 2017, has said she “would love” to see a museum opened in Paris dedicated to her late husband.

Speaking to Journal du Dimanche, she said that his burial place on the French island of Saint-Barthélemy is a long way for fans to come to pay homage.

She added that she owns everything needed to create such a museum: “I have carefully kept everything he entrusted to me for years”; and that she had “even bought things from fans, because he kept nothing, he gave everything”.

She also said that the inheritance dispute with Hallyday’s eldest children is over: “Nothing will ease our pain, but the time for peace has come.”

In December she shared an Instagram post that appeared to confirm a new beau – Parisian restaurateur Pascal Balland.

The prestigious Prix René Goscinny, given each year for upcoming comic book (bande dessinée) authors, has been awarded this year to Gwen de Bonneval and Fabien Vehlmann for their epic book Le Dernier Atlas.

It is the first of three 200-page volumes, and the story features giant robots created in the late 1950s in the context of the Algerian war.

The prize, first awarded in 1988, was created by the widow and editor of René Goscinny, the co-creator of the Astérix books, who died in 1977.

The jury said “Le Dernier Atlas is trying to push the boundaries of the comics genre”.

4. Dancers in the street

Among the French public service employees who took to the streets in December in protest at proposed pension changes were ballet dancers, singers, actors and technical staff from the Opéra and the Comédie-Française – the only cultural institutions concerned by the government’s reform (they are covered by a special régime dating back to 1698, under Louis XIV).

Ballet dancers retire at the age of 42 due to the stresses on their bodies and because they cannot perform at the requisite level of excellence.

Yet once their ‘special fund’ is removed, as is proposed, the dancers fear that their pensions will disappear. “The biggest constraint is to find a job” [at 42], said a dancer and spokesman, Alexandre Carniato.

The Danish-born actress Anna Karina, an icon from classic New Wave films of the 1960s, died in December aged 79.

Hanne Karin Bayer – her ‘stage’ name was given to her by none other than Coco Chanel – starred in epoch-defining films such as Bande à part (pictured abive), Pierrot le Fou and Alphaville, an acting muse to then director husband Jean-Luc Godard (they made eight films together).

She was interred at a private ceremony at Père Lachaise cemetery in Paris.