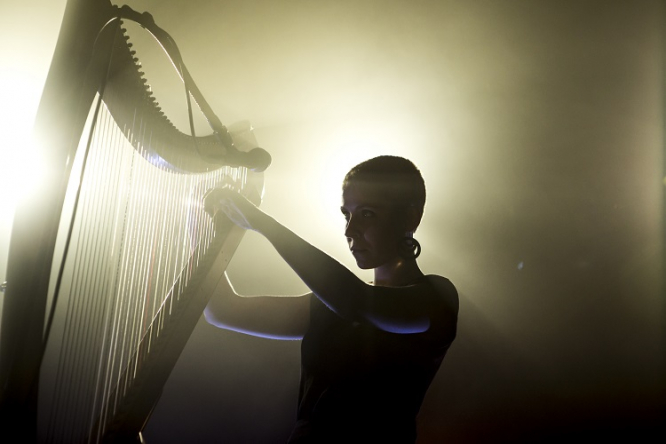 “I grew up in a house full of music, especially jazz, and other styles which aren’t normally associated with the harp, but that’s what I wanted to play,” she said.

“I used to listen to a record before bed, so I went to sleep with music, the vibrations of it played a big part in my development.”

Both the classical and the Celtic harp have inbuilt musical constraints, she said, and she wanted to explore all styles of music including electro, hip hop, chanson and jazz.

“I wanted to combine them all, and playing jazz on a harp made me long for an instrument that could play all the notes, like a piano.

“And finally, in 2009, Philippe Volant built one for me. I had to relearn to play it, of course, but in 2014 I got an electric version built especially for me.”

Unlike the cliché of harp music being delicate, romantic and ultra-feminine, Laura uses her instrument as an orchestra and a drum kit, creating a whole range of sounds with an arsenal of laptops, sound-effect pedals and multi-track loops.

Working live is very different from working in the studio, she said, because live music remains organic.

“The skeleton of the music is the same but on stage I never use a metronome, for example.

“The tempo, the exact rhythmic pulse, varies slightly from one performance to another. Also, on stage I always keep a space for improvisation. There are always spontaneous ideas.”

Her latest solo album, called Perspectives and Avatars, is due out later this year.

In the meantime you can catch her live at the Pan Piper in Paris on February 24, when she will be performing with Doksha. For other dates, see her website, lauraperrudin.com.

Playing an unusual instrument has its pros and cons. “Some people are really curious to find out more, and others just ignore you,” she said.

“Women have always made music – it’s just that you don’t often hear about them. Creativity is a power and, of course, traditionally women didn’t have power.

“Things are changing now, however. They still aren’t perfect but women are getting more recognition.”

An exploration of female musicians would not be complete without sisters Nadia and Lili Boulanger.

Lili (1893-1918) was a child prodigy, and the first woman to win the prestigious Prix de Rome for musical composition.

Her life was cut short by illness when she was only 24, but her equally talented sister Nadia (1887-1979) lived into her 90s working as a composer, conductor and teacher.

She taught at the Juilliard School in the UK, and the Yehudi Menuhin School and the Royal Academy in the UK, and conducted orchestras including the BBC Symphony, Boston Symphony, and the New York Philharmonic.

To honour their memory, the Nadia and Lili Boulanger International Centre in Paris awards substantial scholarships to outstanding music students every year.

She was in the same social circle as Picasso and Modigliani; her work was admired by Satie and Ravel took her under his creative wing, mentoring her during the 20s.

Marguerite Monnot (1903-1961) is principally known for her work with Edith Piaf. She composed the music for many of the singer’s greatest hits including Milord and it is reputed, La Vie en Rose, although this is officially credited to Louiguy). She also wrote the music for Irma La Douce, among other hit films.

Coming up to the present day, Gisèle Gérard-Tolini, who keeps her date of birth secret, has been a conductor and composer for the best part of 30years and has written scores for numerous films including The Adventures of Aladdin, Fanfan La Tulipe, Transporter 2, Transporter 3, Asterix and the Vikings, Taken, and From Paris with Love.

She is one of the most sought after composers in Europe.