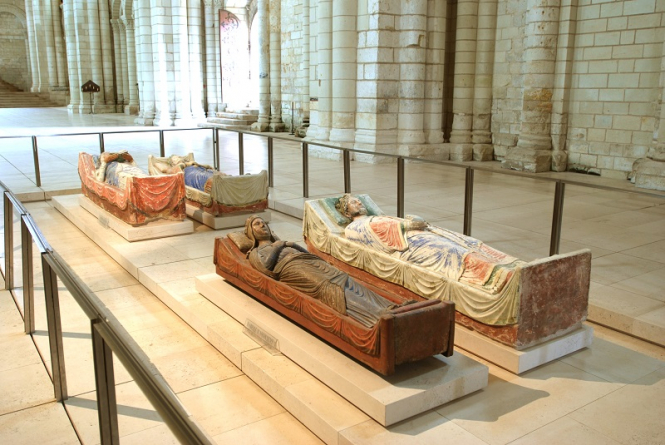 The tombs of Richard, Eleanor of Aquitaine, Henry II and Isabelle at Fontevraud
By Samantha David

The story of his death – and what happened to his body afterwards – says as much about Richard the Lionheart as his battle-strewn life.

It is easy to think of Richard as a purely English king. However, although he was born in England, he spent most of his life abroad – much of it in France – and it was France that he wanted to rule.

His mother, Eleanor of Aquitaine, was ferociously political, ambitiously determined to secure power and wealth for her numerous offspring, including Richard.

He was the third and favourite of her five sons with her second husband, Henry II of England – with whom she also had three daughters.

Richard was born in 1157, and grew up speaking French and Occitan.

It is not known whether he spoke more than a few words of English.

As the third son, he was not expected to ascend to the throne, and his mother took him on his first trip to Normandy when he was eight years old.

At that time kings across Europe were jostling for territories, power and money.

Richard’s father planned to divide his territory among his three eldest sons, so that they could each have a kingdom to rule. Henry would be king of England and rule Anjou, Maine and Normandy; Richard would inherit Aquitaine and Poitiers from his mother; and Geoffrey would have Brittany.

This set the brothers at odds with each other and with their father.

By 1171, when Richard was 14 years old, he had been given the Duchy of Aquitaine, and was touring the region with his mother. A year later, he was formally recognised at the Duke of Aquitaine.

In 1173, Richard and his two older brothers, in rebellion against their father, took refuge in the French court and swore allegiance to Louis VII – their mother’s first husband.

The battles and sieges that followed were fruitless. Henry managed not only to put down the rebellion but also clapped Eleanor into an English jail.

The three brothers were forced to beg their father’s pardon.

As part of the reconciliation, Henry ordered Richard to go back to France and punish all the nobles who had rebelled and fought alongside Richard, mainly by razing their castles, which he did with merciless efficiency.

The territory wars continued, however, even after Richard became the King Richard I of England in 1183.

The complex family relationships between the ruling families in Europe fed the political complexities, and each and every man was determined to rule as much territory as possible. Wars were a way of life.

After a year of raising taxes, making officials pay huge sums for retaining their posts, and selling off land, titles and other favours, Richard set off on the Third Crusade to the Holy Land in 1190.

On the way, he conquered Cyprus and married Berengaria of Navarre, whose lands adjoined Aquitaine. It was hardly a love-match; Berengaria accompanied Richard when he resumed his crusade, but very soon turned back.

Richard did not begin his journey back to Europe until 1192.

En route he was shipwrecked, captured and ransomed (his mother nearly bankrupted England and France to get the money), and did not arrive in England until 1194 – where he stayed long enough to enjoy a second coronation, disappearing back to France a month later.

Richard has been well-treated by history. Contemporary documents say he stood straight and tall, with blond hair and blue eyes. He was also well-educated; not just literate but also the author of poetry, and a supporter of the arts.

He famously declared that he was born with such high rank that he was second only to God.

He was also a ruthless military commander with a reputation for violence, cruelty and rape.

In Occitan, his nickname was ‘Oc e No’ (“Yes and no”) because he was so taciturn. He was engaged to Alys, Countess of the Vexin, from 1169 to 1191 despite it being common knowledge that she was his own father’s mistress.

He had no loyalty except, perhaps, to his mother, and spent his life slogging it out on the battlefield. He fought the French; he fought his father; he fought all over Europe and the Middle East while on the Third Crusade.

But the biggest clue to his character lies in the story of his death.

In 1199, while laying siege to the modest castle of Châlus-Chabrol in Haute-Vienne, he apparently strolled out one evening after dinner to inspect progress.

He had not put his chain mail or armour on, and even when an archer was spotted taking aim at him from the ramparts he did not seek cover.

The man had apparently been defending his position all day using a frying pan as a shield, so Richard, apparently amused, mimed at him to try his best.

According to the story, Richard was hit in the shoulder by an arrow.

Back in his tent, he attempted to remove the arrow himself and failed. He then ordered the archer to be brought into his tent to be congratulated and rewarded with money. Surgeons removed the arrow but gangrene set in and, some days later, he died.

What is reasonably certain, however, is that Richard’s entrails were buried in Châlus, his embalmed heart in Rouen, and his body in Fontevraud Abbey.

Closed to the public for many years, the Château Châlus-Chabrol has this year been re-opened by new owners and is in the process of being restored.

“Right here, beneath our feet in this chapel, is where they buried Richard the Lionheart’s insides. Just before the altar,” said new owner Jacques Vigneras.

An English duo, George Connor and Martin Lord, have undertaken the task of restoring the place where Richard I died.

The pair intend to hold concerts and conferences at the château once it is fully restored, and they are both proud of a letter from Queen Elizabeth II.

“We wrote telling her we are restoring the place where Richard I died and she wrote back asking to be updated on progress,” said Mr del Vecchio.

The journey from Châlus to Fontevraud Abbey covers around 200kms of flattish farmland, and today takes about three hours. When Richard’s body was transported the better part of a millennium ago, it would have taken weeks.

Arriving at Fontevraud is impressive. A forbidding barred gate and a walled courtyard where you leave your car hint at what is coming.

But it is only a hint, because what awaits is extraordinary. Fontevraud was built as a strict religious order; silence, poverty and prayer were the rules.

Toward the end of her life Eleanor of Aquitaine retired there, and was buried alongside her husband Henry II there, as were Richard and Isabelle of Aquitaine, the second wife of Richard’s successor King John.

“The religious order was dissolved during the Revolution and in 1804 the massive complex of buildings was turned into a jail housing 2,000 prisoners,” PR officer Olivier Chable said. “Work was undertaken to secure the perimeters and cell blocks were constructed.

“The prison regime was notorious and said to be one of the toughest in France. Many inmates died. During the Second World War, 10 members of the Resistance were shot there.”

The prison finally closed in 1963 and the Abbey was opened up to the public in 1985.

Much work has gone into removing the vestiges of the prison and revealing the monastic buildings on the massive site.

Today there is a four-star hotel and a Michelin-starred restaurant on the site. But what is even more impressive is being able to wander through the ancient buildings at will.

The four reclining effigies of Richard, Eleanor, Henry and Isabelle lie in stately silence in the Abbey Church, although the whereabouts of their remains has been unknown since the Revolution.

You can walk through the refectory where nuns ate facing the walls in silence, the staircases, the halls, the cloisters and draughty dormitories where they slept before waking before dawn for prayers.

Overlaying all this are the ever-present scars of the horrors of a prison where men, women and children were incarcerated in such harsh conditions that no-one was expected to survive more than two years. You can almost hear the ghosts of former inmates weeping.

It seems, somehow, a fitting final resting place for a restless warrior king.