French performance artist locked inside statue of himself for 7 days 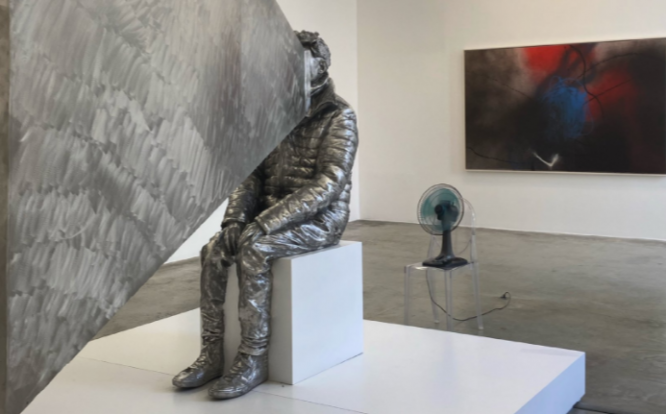 Mr Poincheval has included a survival kit and method for using the toilet inside the sculpture Pic: Fabien Louis Vazquez / @EidFabien / Twitter

Extreme performance artist Abraham Poincheval is currently ‘performing’ his latest artwork, by sitting in an aluminium model of himself for seven days and seven nights nonstop.

The artist became well-known in France after spending a week inside ‘the stomach’ of a specially-equipped stuffed bear in a Paris museum. He has also previously closed himself inside a rock and a tree trunk, for several days, for other art pieces.

He is now enclosed in a moulded aluminium sculpture of himself, and is set to stay inside for 24 hours a day, at the Galerie Perrotin in Paris. By the time he comes out on June 18, he will have been inside for a full week.

He is not able to move his head much, and is only able to see a painting hanging in front of him, a 1.8m abstract square artwork, Hartung 80, by the late German-French painter Hans Hartung.

Mr Poincheval, who was born in Alençon, Normandy, has been preparing the performance for three years and the aim is to push his body to his own limits in the name of art.

Inside the sculpture, he has included a survival kit, including nine litres of water, and easy-to-eat food such as soup, dried meat, compotes, and energy bars.

There is also a system through which he can use the toilet.

He is being monitored by a healthcare team, and has medical sensors all over his body so they can track his condition at all times.

Before going inside, he told France Télévisions: “I feel a bit apprehensive, but that’s normal, that’s to be expected for all [unusual] experiences. But it’s about the complexity. How far can you go? And how can you come back?”

Eric Binnert, who is part of the technical team and producing the performance, said: “His metabolism will slow to allow him to be calmer. There is something quite meditative about it.”

Mr Poincheval is no stranger to unusual stunts. In 2002 he walked across France in a straight line and later lived for a week in a hole underneath a bookstore in Marseille.

French ‘RoboCrop’ pilot scheme could be solution for small-scale farms
15 October 2021
More from Culture
More from Connexion
Get news, views and information from France
Join the newsletter
Subscribe to The Connexion