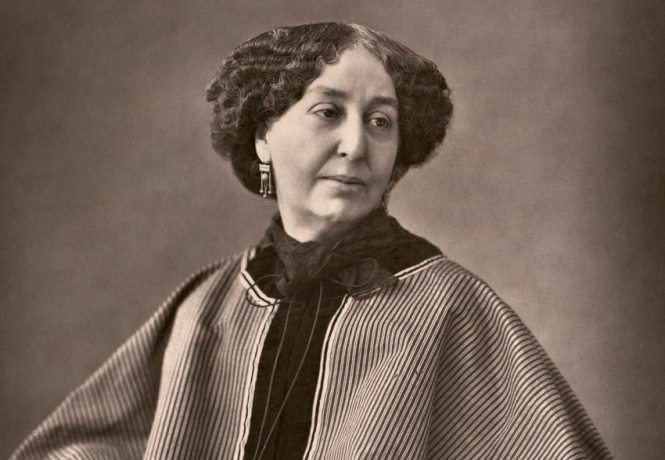 One of the most well-known images of 19th-century author George Sand, taken by Nadar (aka Gaspard-Félix Tournachon)
By Samantha David

George Sand was one of the most popular novelists in Europe in the 19th century – but her freewheeling lifestyle, cross-dressing and long affair with Chopin would sear the pages of a modern romantic novel.

In true bed-hopping tale style, Sand’s father was an aristocratic military man and her mother was a prostitute.

The pair married just before their daughter, Amantine Lucile Aurore Dupin, was born, in 1804.

The parents did not stay together long, and when her father died her mother abandoned her.

The four-year-old orphan was taken in by her paternal grandmother, Marie-Aurore de Saxe, herself the illegitimate daughter of Marshal Maurice de Saxe, who was himself the result of an illicit affair.

The family were used to children being born the wrong side of the blanket; their social acceptance relied entirely on their wealth and aristocratic connections, which reached into many of the royal houses of Europe.

The family home was a large estate in the historic French province of Berry called Nohant, which later became the setting for many of Sand’s novels.

Only a year after the death of her grandmother, in 1822 at the age of 18, she married Casimir Dudevant, another wealthy, illegitimate aristocrat.

She began collaborating with her friend Jules Sandeau, and using the pen name Jules Sand they published their novel Rose et Blanche in 1831.

The following year, George Sand published her first solo novel, Indiana, under her own pen name.

It was the beginning of an avalanche of words. In the end, she wrote more than 80 novels and 25 plays, as well as reviews, autobiography, journalism, political writings, literary criticism and letters.

By 1835, she and Casimir Dudevant had legally separated Sand retained custody of her children. Her romantic progress by this time as impressive as her literary output; her list of friends and lovers reads like a novel in itself.

There were also liaisons with numerous other, less well-known people.

Much of George Sand’s writing was drawn from her own life; her series of pastoral novels, known as ‘rustic novels’ was based on her own countryside childhood.

Another work describes an ill-fated winter spent in Majorca with Chopin, while theatrical writings and biographical pieces also drew largely on her own life for inspiration.

She admitted that she often could not remember what she had written, because she wrote so compulsively.

Racy, subversive and romantic, George Sand was at one point Europe’s best-selling and most famous writer, and her success enabled her to flout social conventions with impunity.

At that time in France women were supposed to apply for legal permission to wear male clothing. Sand did not bother. She wore what she liked. She smoked too, which was considered unacceptable for women.

Both paled into insignificance compared to her friendships with bohemians and her string of affairs.

She adored her children but sometimes exposed them to scenes of debauchery with her various lovers. At other times she would disappear for long periods on her own business.

She used excessive punishments on her daughter, and attempted to push her into a loveless teenage marriage. In 1847, at the age of 18, Solange married Auguste Clésinger, a sculptor who was 32 at the time and eventually the pair fell out with Sand over money.

Chopin, who had been Sand’s lover since 1836, became enmeshed in the argument and, accused of preferring Solange to George, was permanently banished from Sand’s life.

She even refused to go to his funeral two years later in 1849, when he succumbed to tuberculosis. More than 3,000 other people did go, however, including Eugène Delacroix, Franz Liszt, Victor Hugo, which made her absence even more notable.

Despite her unconventional lifestyle, George Sand had a wide-ranging collection of friends, artists and fellow-writers who adored her and admired her work:

“What a heart of gold she had! What absence of every petty, mean, or false feeling! What a brave man she was, and what a good woman!” wrote Ivan Turgenev.

“Tell her that I love her with all my heart, that she is still the most womanly woman I have ever known,” wrote Alfred de Musset.

“In this country whose law is to complete the French Revolution and begin that of the equality of the sexes... a great woman was needed.

“It was necessary to prove that a woman could have all the manly gifts without losing any of her angelic qualities, be strong without ceasing to be tender... George Sand proved it,” wrote Victor Hugo in his oration at her funeral.

Untangling the real George Sand is an arduous process. “People often think of her as ruled by her passions, undisciplined, devil-may-care and even slightly mad,” said Martine Watrelot, from the Amis de George Sand association.

“We work to promote her books, and to rehabilitate her memory, but the truth is more subtle. She played ambiguous games with her identity; male-v-female, English-v-French, professional writer-v-housewife.

“In her public life she always used ‘he’ and ‘him’ when referring to herself.

“She smoked, she drank, she walked around Paris unaccompanied.

“She was an excellent rider and always rode in male clothing. She enjoyed the privileges of being male.”

A lot of her lifestyle, said Ms Watrelot, was a way of demonstrating the absurdity of how females were represented.

“In her books the heroines often dress as boys. I think she wanted to play with the two roles, she was both.

“In her private life she was an attentive mother, a woman, an aristocratic, although perhaps not 100% hands-on as a mother, but doting. She wasn’t consciously a feminist but she was in favour of female education and work and emancipation.”

A good place to start exploring the work of George Sand, who died in 1876, is with her pastoral novels; based on her own childhood in Nohant, La Petite Fadette and François le Champi are almost compulsory reading for French schoolchildren, although many people cite two of her later novels Consuelo and La Comtesse de Rudolstadt as her finest.

What emerges is a courageous survivor, a woman battling inherited demons as well as the restraints of the time. A woman who was unsure of her own identity – was she more male or female? A mother or a lover? An artist or a fighter?

“Perhaps she was all of those things,” said Ms Watrelot. “She was professionally very successful, she not only earned her own living, but supported her family.

“Like a man she allowed herself many relationships, some of them only a few days, or just one night long. But she stayed with Chopin a long time.

“Later, she stayed with Alexandre Manceau for 13 years. Both had tuberculosis and she nursed them devotedly, with no thought for her own health. She was physically strong and full of stamina.”

Far from being crazy, George Sand was known for being incredibly self-disciplined – she was calm, self-directed, spiritual, intellectual, intelligent, with a good memory, and good understanding.

“In fact, she was supremely liberated. She was very occupied with her friends, her family and her work. She often worked late into the night, even after a night out dancing or at a concert she would go home and work.

“She just lived her life, and didn’t care what people thought. Other people’s opinions didn’t concern her.”