How restored French city of Carcassonne got its name 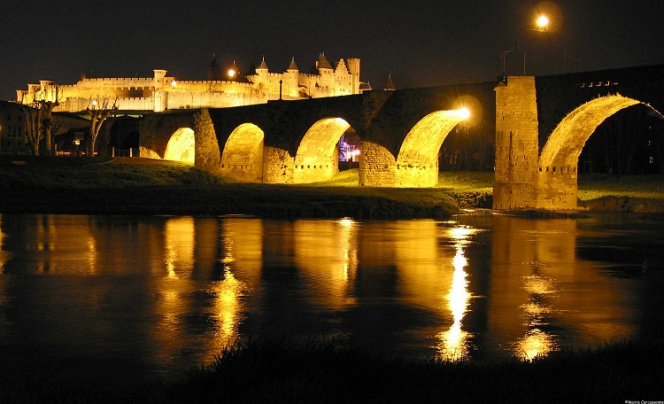 The city of Carcassonne, in the Aude, is known for its medieval centre and the walls surrounding it which were restored in the 19th century.

Less well known is the legend from which the city is said to have got its name, which dates back to the 8th century when Saracens, Muslim Arabs from Spain, ruled the city.

Charlemagne, the king of the Franks, wanted the city for himself and laid siege to it for five years.

During that siege, Prince Balak – the city’s ruler – died, as did many of his soldiers.

His wife Dame Carcas became leader. In the sixth year, food and water were scarce and Dame Carcas ordered an inventory of all the remaining stocks.

The villagers brought her a pig and a sack of wheat, all that was left. She hit upon a daring plan.

She fed the pig, rather than the townspeople with the last remaining sack of wheat and then threw the animal from the tallest tower, down below to Charlemagne and his soldiers.

He was fooled, thinking that if they could afford to waste a wheat-fed pig, the city must have plenty of provisions and he lifted the siege.

Dame Carcas was thrilled at the success of her plan and as she watched the soldiers retreating she decided to ring the bells.

Legend has it that one of the soldiers in the plain below turned to Charlemagne and said “Sire, Carcas …  sonne!”, Carcas is ringing the bells and from then on the city has been called Carcassonne.

The city changed hands many times and its strategic position meant that for centuries it was in need of defensive walls.

However, after the Traité des Pyrénées in 1659 which led to the retreat of the Spanish-Franco border, the city became less vulnerable to attack and also became less important and it was gradually abandoned.

By the 18th century it was poverty stricken and little more than a slum.

Its architectural splendour was saved by Eugène Viollet-le-Duc, an architect who restored many prominent landmarks in the 19th century, including Notre-Dame de Paris and Mont Saint-Michel.

He was ordered by the Inspector of Monuments Historiques at the time, Prosper Mérimée, to study and carry out the restoration of Carcassonne.

The project took more than 60 years.

He studied the city’s history in detail and wanted to restore the city to the period when he thought it was at the peak of its technical perfection – the end of the 13th century.

When he started the project, the main fortification walls were still standing but they were crumbling and the 52 towers shared between the 3km long inner and outer walls were falling down.

Viollet-le-Duc decided to top his towers with steeply sloping conical roofs, which he felt reflected the architecture of the Middle Ages and which give Carcassonne its distinctive silhouette today.

He demolished as well as built, ordering the destruction of around one hundred homes which had been built between the outer and inner walls, but which did not fit his plan for the medieval look to the city.

He was also responsible for restoring many of the buildings within the walls including the Cathedral.

Thanks to him, instead of being a forgotten ruin, Carcassonne is now a Unesco World Heritage site that welcomes around two million tourists a year.