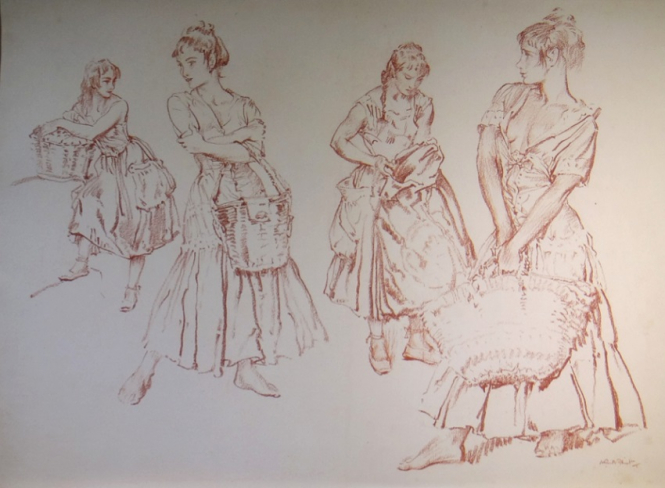 Readers of a certain age may recall that having a tastefully- framed Russell Flint over the fireplace was seen by some as a mark of middle-class status.

This probably said more about the class system than the owners would care to admit, as the pictures, typically showing scantily-clad young women in sensuous poses, were often more than mildly titillating.

What made them socially acceptable was that they were indisputably “Art”.

Sir William Russell Flint (pictured left) was born in Edinburgh in 1880 but moved to London aged 20.

His background in commercial illustration and a knowledge of printing persuaded him that real money – and a regular supply of it – was to be made not from original works but from signed copies, produced in their thousands.

His mastery of the elusive medium of watercolour was rewarded with the improbable combination of professional recognition and commercial success. Lauded by the public and his peers, he was knighted by George VI in 1947.

Throughout a long life – he died just short of 90 – Sir William travelled extensively through Italy, Spain and France in search of subjects.

His paintings depict a world of sunshine and shadows, of long siestas and languid pleasure. Those who dismiss them as “calendar fodder” miss the point: their evocative power.

Years before cheap flights made mass travel possible, they struck a chord in grey, post-war Britain when olive oil, bought in tiny bottles from Boots the Chemists, was something you put in your ear, not on your salad. Russell Flint was to art what Elizabeth David was to cookery.

The key to his enduring popularity is that his pictures have always been “accessible”, seeming to flow from his brush with effortless ease. He was also a consummate draughtsman of the female form and, along with the watercolours, produced some exquisite drawings in red chalk.

The result was what some critics refer to as Sir William’s “Bohemian sensuality”; others,  snidely, as his “breastscapes”.

One of his best-selling watercolours, Lavoir La Bastide (pictured above), was painted in the village of La Bastide-d’Engras, just north of Uzès in the Gard.

Even when the young women were engaged, as here, in the unglamorous weekly wash in the local lavoir – a favourite location – they seem never to miss the chance for a languorous pose or quick skinny-dip.

Although they fit perfectly into their surroundings, the figures were usually added later, painted from a model back in the London studio.

Yet Russell Flint got away with it. If his paintings provoked a frisson among his many male admirers, the fault lay with their reaction, not with the artist’s intent. It helped that he maintained an unimpeachable propriety throughout his life.

At work in his studio, he would typically wear a jacket and waistcoat with collar and tie. His subjects may have been Bohemian, but not for Sir William the paint-smeared smock and jaunty beret.

Fifty years after his death, his paintings still hold their own in today’s art market. David Tatham of russellflint.net is the leading dealer in his work. He is based in Nottinghamshire but we met in Dordogne, in Brantôme, a town Sir William often painted.

The price for a Russell Flint original, he said, depended on size and subject: “It’s really from a few thousand, all the way up. A full-sheet water-colour would be anywhere up to, say, £75,000 for a very detailed one that has a fantastic provenance – such as La Cave Voutée (pictured below).

What about a signed limited edition print? “Again, it depends on the subject. The vast majority seem to be selling between £300 and £700… so about £500.”

But, despite Russell Flint’s continuing popularity, the academic art world seems to have decided his technique was just too effortless, a triumph of craft over art. In a word, slick.

Anything as instantly appealing and frequently reproduced must be suspect. Where is the complexity, where is the angst?

In 2011, Tate Britain put on what was promoted as the “most ambitious exhibition about watercolour ever staged”, with works spanning 800 years.

It seemed anyone who had ever put, or spilled, paint on paper was represented – including Tracey Emin, whose post-modern smudge was said in the catalogue to be “almost abstract”, and even Victor Hugo (no, I didn’t either).

But of the man who, a couple of generations earlier, had been hailed as the greatest water-colourist of his time, whose work features in public and private galleries worldwide, including the Royal Collection, there was not a single picture, not even a passing mention.

And a resurrection of sorts: technical advances in colour reproduction mean the latest prints are more sparklingly faithful to the originals than those produced in his lifetime.

Meanwhile, as the #MeToo movement grows, when one might expect less demand for his more risqué work, his landscapes are making a comeback.

Mr Tatham said: “The overall shift has swung more towards the French rural scenes than the nudes, whereas 20 or 30 years ago his finest work was always the nudes.”

France offered Sir William infinite variety, from Brit­tany via Paris and the Loire Valley to the Riviera. He had a soft spot for Périgord, saying of one autumn visit: ‘‘Trees especially, though (also) swift streams, ancient enclosures and arcaded streets with cunning vistas, refused to be ignored.”

Many of the rural scenes he painted have barely changed.

Compare his 1964 picture of the bridge at Bourdeilles in the Dordogne (above) with what it looks like today (below).

The only significant difference is that a tree has been planted on the spot where Sir William set up his easel.

His paintings may not break the mould, tax the intellect or plumb existential depths.

Instead, they do what any painting that you would want to hang on your wall should do: they give pleasure.

G’day Sheila could have been b’jour Bruce
16 August 2019
More from Culture
More from Connexion
Get news, views and information from France
Join the newsletter
Subscribe to The Connexion