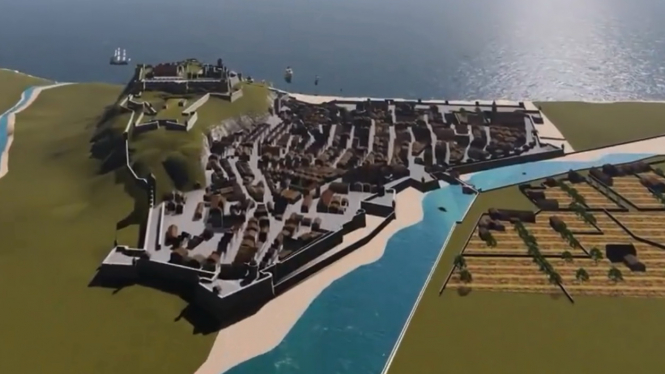 The video, which also points out key sights (some which still exist, and some which do not) was inspired by an old map of Nice by a painter of the day.

It shows how the city looked long before any tourists or British or Russian residents arrived (and funded structures like the Promenade des Anglais or the Russian church), before the current town centre was built, the Paillon river was covered over, the port was built, or the castle on the hill was knocked down.

In those days the Pont-Vieux bridge was the only way of crossing from today's Old Town to what is now the town centre – not that there was much reason to. It was built in the 1200s and only finally knocked down when the Paillon was covered in 1921.

The video coincides with an exhibition Entre monts et rivages  running this summer, and until the end of the year, at the Musée d’archéologie de Nice – Cimiez at 160 avenue des Arènes.

The exhibition is based on the work of the city archeology service since it was created 10 years ago, which has helped to better understand the way Nice developed over the years.

Those who are fascinated by archaeology may also like to check out this map that has been created by the mairie of Paris, of all of the discoveries in the capital over the last 170 years.

Click on each site indicated on the map for information about what was found there.