Cookie Consent by FreePrivacyPolicy.com The circus has come to town, and it’s here to stay French News and Views in English | The Connexion
12 may 2021
Classifieds Currency exchange Newsletter
Login Register BASKET
Facebook Twitter

The circus has come to town, and it’s here to stay 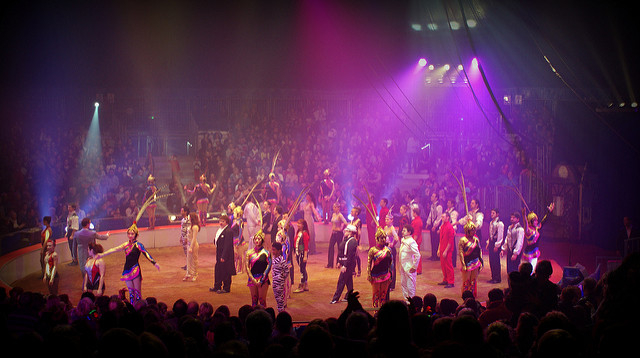 It also has a social role, with hospital clowns now classed as a profession and circus schools bringing life to deprived areas. And the newer contemporary style of circus was pioneered in France.

The circus in France is supported by a government-funded body, HorsLesMurs, founded in 1993, which discovered in a recent survey that 78% of people over 15 had been to le cirque at least once, compared to 58% for the theatre, making the circus the most popular form of live show.

But it was an Englishman who first introduced the circus to France. Philip Astley, a cavalry officer born in Newcastle-Under-Lyme, is seen as the founder of traditional circus. In the 1770s, he put on a largely horse-based show in his riding school in London. By chance he rode in a circle rather than a straight line and later added a clown to amuse his spectators.

He erected a covered building with a circular stage 13m in diameter – which has been the model for the circus ring ever since – and took his idea to Paris where he built the Amphithéâtre Anglais, the first purpose-built circus in France. The building, which no longer exists, was then leased to Antonio Franconi, an Italian equestrian who helped introduce Astley’s idea to France. Franconi later moved premises and handed his business down to his two sons.

There are now several big family circuses in France including Cirque Medrano, Stephan Zavatta and Arlette Gruss. One of the biggest is the Cirque Pinder, which also has its origins in the UK.

In the 19th century, William Pinder owned a travelling theatre, which he transformed into a circus in Hartlepool after he came into possession of a huge sail from a warship which he used for his big top, calling it the Britania.

Since then, the show has survived two world wars and continues to tour the country to this day. Its present owner, Gilbert Edelstein, is passionate about his circus and plans to open Pinderland, a circus park in 2016 at Perthes-en-Gâtinais, near Melun in Seine-et-Marne.

It will have a 1,500-seat capacity permanent big top – with shows on Wednesdays, Saturdays and Sundays – a circus school, two museums and a large collection of animals.

Mr Edelstein’s dream is to have sheep, donkeys, deer and horses living in semi-freedom, traditional circus animals in enclosures and elephant and camel rides through the park for the public.

The tours round the country will continue. Every year there are more than 650 shows put on in more than 100 towns, with 120 people and 50 animals involved. Prices range from €7 to €45.

“Traditional circus is still as popular as it has ever been,” said Mr Edelstein.

“It attracts an audience of 14 million every year, far more than the modern, contemporary circus, and despite the cinema, television and computers people love to see live exploits which give you the shivers.

“It is a huge adventure and there is such a variety of acts. It’s for real and makes everyone happy. I think there is a big future still ahead of us. And in my circus my son and daughter are there to carry it on for me.”

What makes a traditional circus?

How does he describe traditional circus? “The circus is acrobats, clowns, magic brought together by a unity of colour. And for me no circus is complete without the animals. It is what attracts people. I am looking forward to showing an even greater public these animals at Pinderland.”

In the 2015 show there are 11 acts – of which three are with animals. The first, Les Animaux Exotiques, showcases camels, horses, donkeys, zebras and llamas, the second features elephants and the third has Mr Edelstein’s son, Frédéric, performing with a dozen white lions (he has presented his act a record 10,000 times).

The use of animals brings Pinder into conflict with a growing number of campaigners who want to see circus animals banned, which is already the case in some countries.

In September, the Netherlands passed a law banning most mammals, such as elephants, tigers and lions from circuses - however there is a list of 'domesticated' animals which can appear including dogs, horses and camels. Other European countries which ban all or certain animals include Austria, Belgium, Greece and Finland, and many have local bans such as in Spain and the UK.

In France there are laws governing the conditions in which circus animals are kept. Hippopotami must have access to a large pool, the sizes of cages are regulated and the animals have to be in good health to perform.

However, Code Animal, an animal welfare association in France linked with the European umbrella organisation Endcap, sees these measures as inadequate.

It has joined in a Europewide petition to promote the total ban of animals in circuses. The move is largely supported by animal welfare groups, including the SPA in France.

“Animals shouldn’t be in circuses because they cannot live a natural life in the conditions they would find in the wild,” said Code Animal president and founder Franck Schrafstetter.

“Elephants for example usually walk 17km a day and spend on average an hour in the water and live in a matriarchal society. Even if a circus complies with the rules, as Pinder does, we still believe that circus life is not suitable, whether or not the animals were born in captivity or found in the wild.

“Studies have shown that these animals develop behavioural features, such as displacing their weight from foot to foot, which is proof of chronic stress. We believe many circuses mistreat their animals.”

Mr Schrafstetter says that if people want to see an end to circus animals they should sign the Code Animal petition and avoid such shows – or if they do go send photographs of any proof of badly treated animals.

But Mr Edelstein, who is also the president of the Syndicat National du Cirque grouping the biggest circuses, says animals are essential: “Nine out of 10 phone calls from the public are asking whether there are animals in the show. I don’t understand why there is this movement against us. Our animals are treated very well.”