Traditional Paris bistrot where stars come out at night 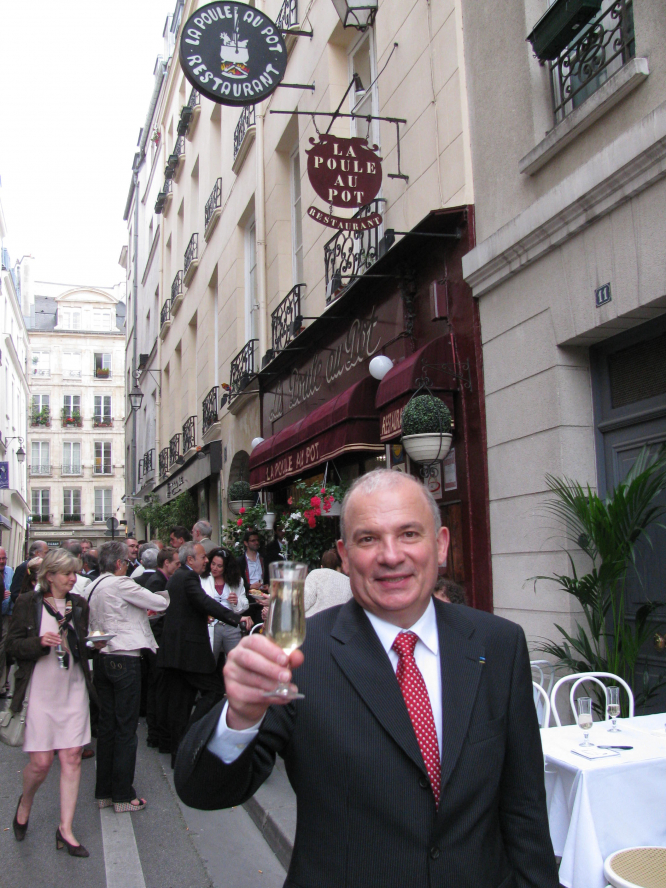 IT IS two o'clock on a Wednesday morning and I’m enjoying a bowl of French onion soup at La Poule au Pot in the Les Halles quarter of Paris.

What may seem to be an unreasonable hour to be out dining on a weekday is, in fact, the perfect time to get to know one of the most venerable traditional bistros and one of the most esteemed bistro-owners in the capital.

To eat late is easy in Paris. It is just as easy to eat well. But to eat late and well is rare. Furthermore, not only does my soupe gratinée contain all the basic French food groups (onions, cheese, bread, chicken bouillon and white wine) but a good deal of history, too.

The history of the old central food market, dubbed ‘the belly of Paris’ by Emile Zola, is here. So is the history of this restaurant, where the décor has not changed much since its creation in 1935.

And while classic French songs of the 1950s play softly in the background, I enjoy fashion, film and pop music since the 1970s as well. I am sitting with Paul Racat, who has owned La Poule au Pot since 1974.

As the waiter clears away our empty bowls, Mr Racat brings out the guest books containing the signatures, comments and drawings of some of the hundreds of familiar names and faces that have come here: musicians, actors, comedians, designers, models, architects, chefs and others that Racat collectively refers to as “the artists”.

La Poule au Pot has been known to have a party atmosphere in the middle of the night – whether it was when some of the Rolling Stones first visited after a recording session in Montmartre in the mid-1980s or when well-known French jazz pianist Michel Petrucciani would stand on a banquette and tell raunchy jokes.

This was never a place to see and be seen, but rather to enjoy the classics of hearty fresh bistro fare amiably served at any time of night. One is far more likely to see couples or friends in discreet conversation, whether they are artists or not. And it is not unusual to see someone dining alone after midnight.

Mr Racat recalls Bruce Springsteen sitting quietly in a corner in the early 1980s, writing, possibly working on the lyrics to a song.

I find his signature in the guest book. “Very good,” he wrote on the same page signed by French comedian Roland Magdane.

Musicians and actors still come, but gone are the days when there would be a haze of illicit smoke in the street. “The 1970s and 1980s were what they were,” Mr Racat says, “but I never tolerated drugs inside the restaurant.”

“When I started out I imagined developing four or five restaurants, but I ended up staying with one for my entire career,” says Mr Racat.

Not only has he remained dedicated to his first and only restaurant, but also to the quality of the food he serves: escargots and bone marrow to veal kidneys and poule au pot Henri IV (the restaurant’s namesake dish of long-simmered chicken and vegetables in broth) to tarte tatin and crème brûlée.

His dedication to maintaining high standards of traditional dishes has made the restaurateur one of the capital’s guardians of such cooking. He is the Paris representative of the fraternal gastronomic order La Marmite d’Or, which honours the preservation of traditional cuisine and products. Paul Bocuse, Joël Robuchon, Guy Savoy and other chefs known for their high gastronomy have signed his guest book. He has also been made a Chevalier de l’Ordre National du Mérite.

Mr Racat grew up in the Bourbonnais area of the Allier department in the Auvergne. At 18, he landed his first kitchen job in Paris at the gastronomic restaurant Prunier.

Brief stints followed at a series of stellar restaurants – Tour d’Argent, Plaza Athénée and Trianon Palace at Versailles. In addition to gaining great culinary experience during those six years, Mr Racat says that he also learned “how poorly waiters and kitchen staff were treated by chefs and bosses at the time.”

Together those valuable lessons led him at age 24 to strike out on his own.

“A partner and I were looking for a business and we came upon this one. With the market gone [Paris’s central food market moved to Rungis is 1969] a business at Les Halles wasn’t worth much at all.”

Racat and his partner bought the business in 1974. Mr Racat created the menu and ran the kitchen. His partner oversaw the dining room.

Several years later their teamwork turned wobbly, so Mr Racat bought out his partner, then hired a chef and began working as the front man. He would eventually acquire the building as well.
Mr Racat and his initial partner did not set out to create a venue for celebrities, but thanks to friends of the partner and the fact that the restaurant stayed open all night, La Poule au Pot attracted showbiz folk early on.

Typically it is the record or production company that calls to say that the artist is coming. They come after their show with the musicians, the producers, friends or others.

Sometimes a limousine pulls up, as it did when a little fellow arrived with a beautiful blonde on his arm and two hefty bodyguards. “Love God. Prince” he later wrote in the guest book.

Mr Racat and his partner were only the second owners of La Poule au Pot. They bought the business from its original owners, the Penigueys, who had opened the restaurant in 1935 and had scarcely changed the decor in the following 40 years.

When Mr Racat bought the building from Suzanne Peniguey, then an 82-year-old widow, “she asked me not to change the décor until she died and I promised that I wouldn’t.”

His promise has held long beyond her death. Peniguey died several years ago at the age of 98, yet the original décor in the restaurant remains largely intact even today.

Over the years Mr Racat has changed some of the wallpaper, updated the overhead lighting and added some photographs and paintings, including one of the front of the restaurant that he painted himself. Nevertheless, with its mirrored walls, copper bar counter, deep red banquettes, mosaic floor tiles, gold glass tiles around columns and various decorative elements passed on from the Penigueys, the bistro spirit of pre-war Les Halles remains in the décor as it does in the cuisine. The original cash register is still there, too, though it is no longer used.

A three-course meal costs €50-60 without wine, moderately priced for a quality meal in Paris. Yet one might simply come for an after-midnight bowl of onion soup and a glass of white wine.
Among Mr Racat’s additions to the décor are the hundreds of little plaques that border the banquettes and side panels indicating the names of artists that have signed the guest books. It’s now the artists who ask for a plaque with their name to be placed here, he says.

La Poule au Pot has three categories of guest book: one for artists, one for politicians, one for everyone else.

But only the artists have the right to a plaque. “Artists remain,” he says, “politicians just pass through.” One of the plaques toward the back bears his own name.

The stars are not out much tonight, or at least not the recognisable ones. A waiter whispers that he has just been told that there’s an Israeli musician at the window table.

Shortly after 3am a woman enters and comes over to our table to greet Mr Racat. She has high fashion written all over her, from couture hat to elegant shoe. A former model, he tells me. She lives in the area and occasionally orders something to go.

I notice in one of the guest books that supermodels Kate Moss and Naomi Campbell once dined here together and wonder what they have possibly eaten here in this home of hearty traditions. “They ate normally,” he says.

Looking at the decades of guest books, it appears that the heyday of international headliners has slowed since the turn of the century without disappearing. “Now the children of artists come,” says Mr Racat.

Thomas Bangalter, one half of French pop duo Daft Punk and the son of a music producer, arrived one evening and was immediately recognisable to Mr Racat since he had been visiting since he was a child.

“To La Poule au Pot, where I’ve come with so much pleasure since childhood!,” he signed the guest book. “Thank you for all these meals and for all the evenings I’ve spent here!”
It was Bangalter’s dining companion that evening that Mr Racat did not recognise – until the musician introduced him to his friend, a certain Kanye West.

In 2012, Mr Racat was awarded the Vermeil Medal of the City of Paris for his contribution to gastronomy in the capital. In accepting the medal he said, “La Poule au Pot thumbs its nose at passing time.”

Yet time has passed, and at 65 years old Mr Racat, though he looks young enough to have many years ahead of him at the restaurant’s helm, says that he will willingly retire when the right buyer comes along.

“Operating a restaurant takes its toll and operating an all-night restaurant even more so,” he says.

His wife, Pascale, worked with him in the 1980s, but working nights together was untenable once they had children. They have two sons, aged 26 and 30. “Both are gastronomes, but neither is interested in taking over the restaurant.”

Perhaps some famous chef or group or other entrepreneur will purchase the place, but it is open to question whether the next owner will maintain the quartet of qualities that make La Poule au Pot the institution that it is today: the 1935 décor, the fresh traditional bistro fare, the night-only hours and the all-seeing owner on the premises.

At least one or two may disappear for the sake of increased profits. The best time to spend a few hours at La Poule au Pot may be sooner rather than later, while Mr Racat is still on duty.