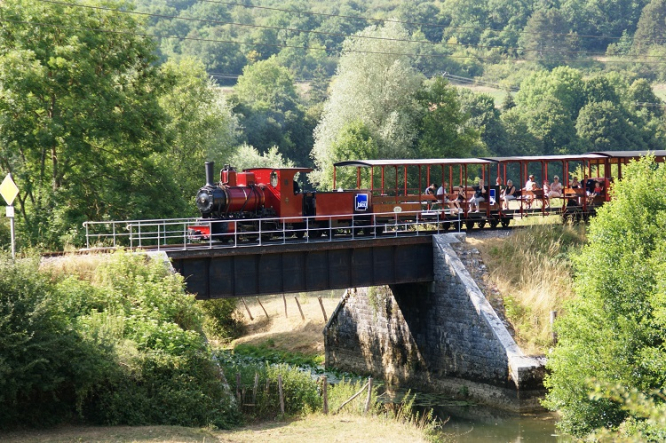 The Chemin de Fer de la Vallée de l’Ouche steam railway has a display of military rolling stock and other Great War material including documents, photos and scale models as well as the chance to ride on a train that actually saw service.

An army of 60 volunteers from all over the world, including the UK, US and Switzer­land, keeps the trains running on narrow-gauge 60cm track that was the mainstay of supplies for troops in the trenches.

Based at Bligny sur Ouche station, not far from Beaune in Côte-d’Or, they have 7.5km of track and visitors can see its permanent display of rolling stock in the depot and will spot Derby-built Claytons and wagons built by US firm Pershing, which are now used to transport passengers’ bicycles.

If they go for a train ride they may find themselves pulled by a locomotive called La Burgonde, which was manufactured in Belgium in 1910 and used during the war to carry equipment to the Oise front.

Despite bearing the traces of a bullet impact in its cabin floor, the little green train still functions well and is now a historic monument.

“Passengers are amazed they can still ride on trains used in the Great War,” said Jean-Claude Meyer, rail president.

“This is possible thanks to our army of volunteers who drive trains and maintain the railway and its rolling stock, having undergone rigorous training and inspection”.

When the First World War started, France had very little field artillery and brought in naval guns along hastily-built narrow-gauge tracks. Giant obusier or mortier could be mounted on circular rails so they could fire in any direction.

The railway exhibition has a scale model of a Schneider rail- mounted 240mm cannon and photos of them in use but the network of 60cm track was also used to keep the poilus in supplies and ammunition.

The Ouche Valley railway dates from 1830, when it was built by Epinac mine owner Samuel Blum to take coal to the Burgundy Canal. The route to the canal was downhill, so trains were ‘powered’ by gravity and their own weight. The return was more complicated:

“Operators hired cows to pull the wagons back to the mine,” said Mr Meyer.

During the German occupation of Burgundy in the Second World War, the rails were taken up and transported to the Russian Front and by the 1950s, only Sunday “fishing trains” used it and it fell into disuse in about 1960.

It was not until volunteers began to lay more 60cm rails in 1978 that it came back to life.

Around 9,000 visitors a year take the single or return trip on trains leaving Bligny sur Ouche at 14.45 and 16.30 every Sunday and bank holiday, or at 15.30 Monday-Saturday in July and August.