Two generations of Dumas, each a compelling character 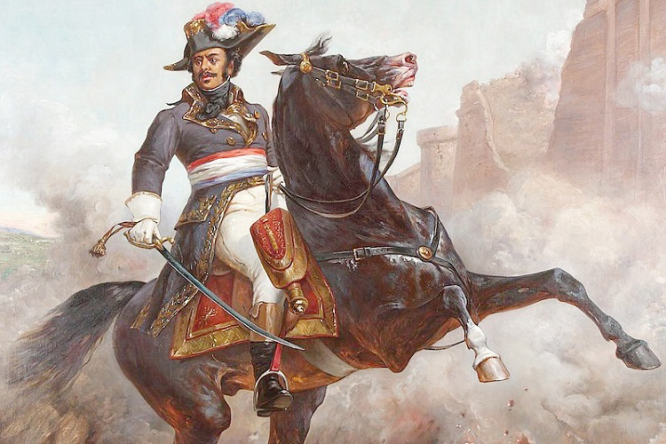 Thomas Alexandre Dumas, the father of Alexandre Dumas père, who was a general in Revolutionary France, was the highest-ranking man of mixed African descent ever in a European army
By Samantha David

You would be forgiven for thinking Alexandre Dumas was a famous French writer, but, in fact, there are two of them: Alexandre Dumas père (who wrote The Three Musketeers, The Count of Monte Cristo) and Alexandre Dumas fils, (who wrote
La Dame Aux Camélias which was adapted in the opera La Traviata). To be clear, let’s call them ‘Dumas père’ and ‘Dumas fils’.

Dumas père (1802-1870) was born in Aisne in Picardy. His own father, born in Haiti, was mixed race, the illegitimate result of a liaison between the Marquis Alexandre Antoine Davy de la Pailleterie and Marie-Cessette Dumas, a slave of Afro-Caribbean descent, making Dumas père mixed race too.

Dumas père’s father arrived in France at the age of 13 and having attended a military training academy, he joined the French army. Having fallen out with his father, he adopted his mother’s name, Dumas, and by the age of 31 he was the first mixed-race man to be promoted to the rank of general. He married an innkeeper’s daughter, but died of cancer in 1806 when Dumas père was only four years old, leaving his widow in dire poverty.

Dumas père did not receive much of a formal education, but he was an avid reader and the family used their late father’s distinguished career and aristocratic connections to get ahead. In 1822, after the restoration of the monarchy, Dumas père moved to Paris and got a job at the Palais Royal in the service of the Duke of Orléans (who was king of France from 1830-1848). He began writing articles and plays, and by the time his employer ascended to the throne, he was able to give up his job and write full-time.

A smart operator, he quickly realised that with press freedom restored there was a huge appetite for serialised fiction. In 1838, he re-wrote one of his plays as a serial novel, Le Capitaine Paul, and subsequently set up a production studio staffed with ghost writers turning out hundreds of stories which he directed and edited.

A series of true crime stories sold well, as did a collaboration with his fencing teacher, The Fencing Master, which was an account of the December Revolt in Russia.

In 1840, he married the actress Ida Ferrier (1811-1859) but did not settle down. He had as many as 40 extramarital affairs and at least four illegitimate children including Alexandre Dumas fils (1824-1895) who was the son of a dressmaker. In 1931, when his son was just seven years old, Dumas père legally recognised him and enrolled him in a prestigious boarding school. A sensitive, creative, gentle, academic boy, Dumas fils did well but was bullied for being illegitimate, and by 1944 he was living permanently with his father.

Dumas fils was, however, well aware of his mother’s pain at effectively losing her son, and it is probably no accident that most of his work deals with tragic female figures and illegitimate offspring. During his lifetime he eclipsed his father’s fame, producing numerous novels and plays, although today he is primarily remembered for La Dame aux Camélias. He was admitted to the Académie Française in 1874 and was awarded the Légion d’Honneur in 1894. He died in 1895 and was buried in Montmartre Cemetery in Paris.

Having annexed his son and moved on to a new collection of mistresses, Dumas père carried on writing. He started his Three Musketeers series of novels in 1844, wrote The Count of Monte-Cristo between 1844-1846, and launched into his Marguerite de Valois  series in 1845, by which time he was earning enough money to build the massive Château de Monte-Cristo just outside Paris, where he lavishly entertained almost anyone who turned up.

Generous, hedonistic, sociable, theatrical, Dumas père was a party animal and a popular raconteur. He was not a drinker, but he loved to womanise, socialise and eat, and financial probity was a foreign concept to him. If he had money, he spent it. If he didn’t, he earned more. Needless to say, two years after the chateau was completed, he was broke and had to sell it off.

All his experiences were grist to the mill, as was public life and contemporary politics, which didn’t always make him popular. Czar Nicholas I banned him from Russia for publishing The Fencing Master; and after King Louis-Philippe was ousted by Louis-Napoléon Bonaparte, Dumas fled to Brussels to escape a disapproving new administration, as well as his multiple creditors.

In 1859 (after the death of Czar Nicholas I) he moved to Russia, where he was massively popular, and when in 1861 Victor Emmanuel II proclaimed the creation of the Kingdom of Italy, he moved there and joined the movement for Italian reunification. During all these wanderings, he never stopped writing, producing so many novels, travelogues, articles and other works, that unknown ones are still being discovered today. He only moved back to France in 1864, six years before his death of unknown causes.

Despite his aristocratic background, his wealth, fame and talent, he faced racism throughout his life, and his response to one racist remark has become a classic: ‘My father was a mulatto, my grandfather was a negro, and my great-grandfather a monkey. You see sir, my family starts where yours ends.’

Dumas père was initially buried at his birthplace in Aisne, and his style of writing went out of fashion for a time. But his legacy was reappraised during the second half of the 20th century, says leading Dumas expert, Claude Schopp, and in 1970 a Paris métro station was named after him. The Château de Monte-Cristo was refurbished and opened as a museum dedicated to the writer, and finally, in 2002, his remains were re-interred in the Panthéon in Paris.

The relationship between Dumas père et fils was strained at the beginning. Dumas fils hated being illegitimate, disliked his father’s endless string of women, and believed that men should be forced to marry the mothers of their offspring. But later, says Claude Schopp, their relationship improved. “As adults they were life companions, and Dumas fils joined in his father’s lifestyle to a certain extent.

But once he became famous, in 1952, Dumas fils became the “father” of his father, trying to sort his finances and his love life. After the father’s death his son always spoke very positively about him and his achievements. Dumas fils also stayed in touch with his mother, with whom he had a good relationship.”

It is impossible to tell what his many ghost writers added in terms of content (plots, characters, themes) to Dumas père’s output. The fact that he employed them at all demonstrates his ambition, but also perhaps a pragmatic attitude to achieving his ends. Want something done? Hire someone to do it! But no original handwritten manuscripts have survived.

Claude Schopp, however, discovered an unfinished novel in the archives: The Knight of Sainte-Hermine. (The English title is The Last Cavalier.) “It was extraordinary, the last few chapters were all plotted out, the notes were all there with the rest of the book. So I became his very last ghost writer and finished the book for him.”

He says it is clear that Dumas père set out to be a success, and was determined to overcome his childhood poverty, despite the racism and snobbism he encountered. “In public at least, he laughed at racists, he wasn’t particularly vulnerable. ‘I worked like a black, which isn’t surprising given my origins,’ he once said. But it also has to be noted that Dumas père was a physically imposing man and people wouldn’t have dared push him too far.”

For his most recent book, Les Dumas, Bâtards Magnifiques, Claude Schopp collaborated with Sylvain Ledda to look at the life of Marie-Alexandrine Dumas, (Dumas père’s daughter). “He also legally recognised her and looked after her all her life. So I followed her life and looked at what she brought to his life, and I also looked at the memoirs of General Dumas which had never been published.”

He says that Dumas père was quite a modern person. “His way of bringing up his kids, his relationships with women, would be mainstream today. But he really followed his own path. And yes, he was scandalous, but he was so good natured that in the end he was always pardoned.”