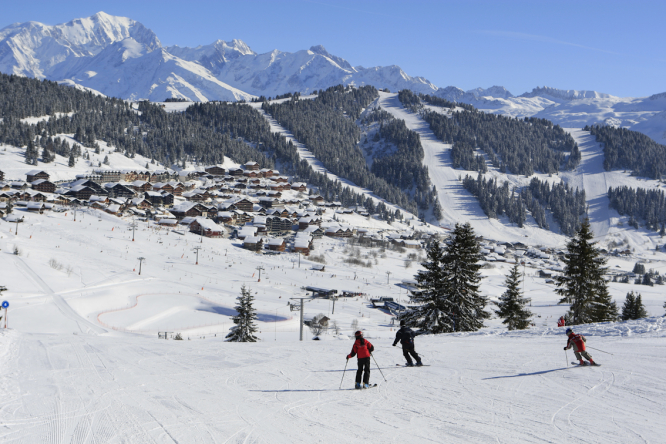 Choosing the right ski resort is vital if you are to enjoy your winter holiday. Some resorts are aimed at a younger crowd who like to ski fast and party hard. Others are more family orientated, some are expensive and designed to attract a richer clientele – and some are so large that they can feel impersonal.

Finding a reasonably sized resort in a traditional village is not always easy, especially if you want to get away from traditional winter tour operators and enjoy an authentic French experience. To this end, you might find that Les Saisies, in the Savoie, fits the bill.

It sits at one end of a road winding along a picturesque Alpine valley, so there is very little through traffic, which makes it pleasant and safe to wander up and down the curving high street.
Much of the accommodation is privately owned self-catering chalet apartments, but there is also a wide selection of options, ranging from cheerful chalets to top-class hotels. And because it has so far managed to avoid the attention of the big tour operators, it tends to attract regulars who come every year, making it an intimate and friendly place to ski.

The village centre is compact, unlike some French resorts which are so widely scattered that visitors have to take shuttle buses to get around.

The streets are lined with shops selling traditional Savoyard foodstuffs and other gifts, as well as sports shops which hire and sell skiing equipment, small supermarkets and, of course, plenty of restaurants, cafés and bars.

The biggest drawback is getting there. Les Saisies is not connected to the rail network, but there is a shuttle bus from the station in Albertville which takes 90 minutes (you can reserve your ticket in advance online at www.mobisavoie.fr). Winter sports fans should also be aware that there is no shuttle from Sallanches railway station. And transfers from either Chambéry or Geneva are expensive and time-consuming without a car.

Its off-the-beaten track location means Les Saisies remains a favourite hideaway for those in the know; ideal for people with their own transport, wanting to book their travel and accommodation independently.

There are 77km of ski slopes (192km if you include the wider Espace Diamant area) for everyone to enjoy, from the most nervous beginner to the most confident and experienced downhiller. There is plenty of cross-country and Nordic skiing too.

The children’s beginner slopes, le jardin d’enfant du Boëtet is practically in the village, and is equipped with rolling carpet lifts, which are the easiest to learn to use.

They are housed in large transparent plastic tunnels, so skiers don’t get cold standing around.

On easy green slopes, most of which are also close to the village, under-5s get free lift passes.

In recent years, Les Saisies has invested in infrastructure including new snow cannons, new lifts, and an impressive leisure centre, Le Signal, which has a swimming pool, saunas, jacuzzis, steamrooms, a large gym and several other exercise areas.

Next door, the resort boasts a restaurant/bar/bowling alley called the 1650 – in reference to the altitude of the resort. Both are worth checking out, but the village has three other spas offering massages and wellness treatments to ease those ski strains.

The second half of March, once the school holidays are over, is an ideal time to go skiing, especially for adult beginners.

The days are longer and sunnier, the snow softer and accommodation prices tumble. There are also various events taking place as the days grow longer.

On March 18-19, 2017, Les Saisies hosts La Lekkarod, a two-day dog sledding event in which teams of dogs will race from stage to stage (it is recommended not to take pet dogs to the event.)

A week later, on March 25-26, there will be an air balloon festival, Les Jeux Aériens des Saisies, during which dozens of air balloons will take to the sky and it will even be possible to get a ride in one. And, yes, music, mulled wine and street food stalls are de rigueur at such events.

The weekend of April 1-2 sees the village host the French Cross Country Championship, the Epreuve de Ski de Fond Longue Distance, consisting of two races – one of 42km and the other 21km.

4 days ago
3
French farmhouse renovation: DIY tricks to get rid of rats