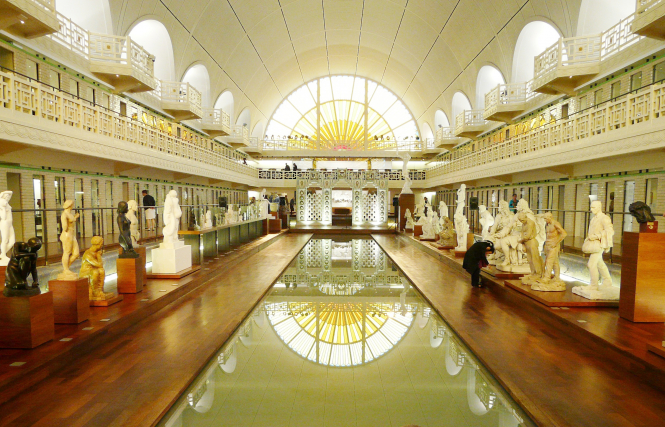 Should you fancy a quick dip, you will be disappointed if you turn up at the Roubaix swimming pool. Although it functioned as a municipal pool for fifty years, the water in the Piscine Musée d’Art et d’Industrie André Diligent in northern France is now purely ornamental.

The swimming pool was built on the initiative of Jean-Baptiste Lebas, the mayor of Roubaix, between 1912 and 1928. Lebas conceived the pool as a hygienic sanctuary for the workers of the town, many of whom lived in relatively abject conditions. A local Lille man, Albert Baert, was its architect. As a left-leaning progressive and a prominent freemason, the choice of Baert was itself a political statement of intent on the part of the socialist mayor.

Construction of the pool began in 1927 and was completed in 1932. The building’s abbey layout was testament to the perceived sanctity of its public health mission. Like a religious building it had a wing for each of the four cardinal points, along with a garden and a cloister. The pool itself was housed in the east wing; the north wing had walking space, a terrace, solarium and bar; and the south and west wings housed baths. In keeping with the idea of improving public hygiene, the basement housed public baths, a steam bath, and even a hairdresser.

The swimming pool was a facility much loved by locals, and all sections of society flocked to use what were state of the art sports facilities by the standards of the time. Once they had passed through the theatrical Byzantine exterior, they bathed in the splendour of the building’s art-deco interior with the feeling of the sun on their back: the pool’s east wing had splendid stained glass windows representing the rising and setting sun at either end.

In 1985, authorities closed the pool because of the fragility of its vaulted roof. The town did not want to see the building consigned to history, and launched an international competition to breathe new life into it. Jean-Paul Philippon won, with his scheme for combining a renovation of the pool building with the development of a new museum of industry and art, constructed within the roofless shell of an adjoining textile factory.

Philippon’s design successfully rethinks the pool building as an expression of the town’s industrial past. The north wing, which originally housed the solarium, has been reimagined as a botanic textile garden: all the plants have historically been cultivated for their fibres or pigments and were once used by the textile industry. The pool itself has been narrowed, and now forms the centrepiece to an interior sculpture garden, used from time-to-time for fashion shows and exhibitions. The changing rooms alongside have been conserved, along with their original enamel brickwork, and repurposed as showcases for ceramics, fabrics and jewellery, amongst other items.

The museum’s permanent collection dates back to 1835, when the town’s manufacturers began to amass fabric samples and to display them alongside literature, fine arts, and scientific and industrial products as a way of cultivating the tastes of the local workers. The collection changed hands several times but ceased to be put on display at the outbreak of the Second World War. The swimming pool finally pulls together all these artefacts and sets them within the context of Roubaix’s past, and the inclusive, improving vision of its leaders.