Art for refugees' sake with the 'notorious' Saype 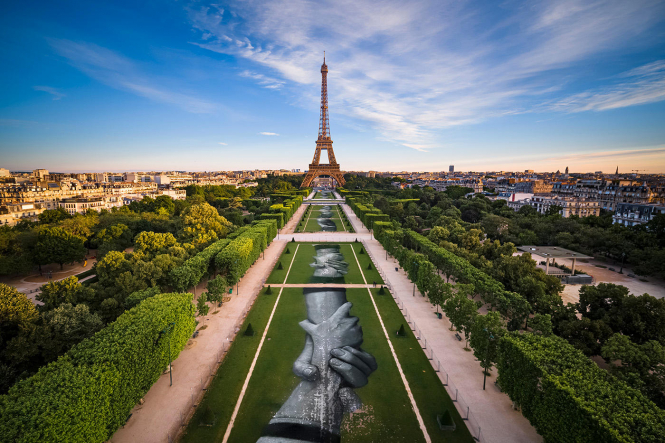 The French artist Saype has generated a media craze with his latest project, Beyond Walls, which aims to support the organisation SOS Méditerranée by raising awareness of their work.

Saype, whose real name is Guillaume Legros, was born in a tiny village in eastern France. He started spray painting when he was 13 and for years he combined creating street art with a full-time job as a nurse.

Asked why he chose to pursue his dream and work as an artist full-time, he said: “It was because of the notoriety. When I started to be recognised and to be able to make a living as an artist I stopped working as a nurse.

“It would say that it definitely caught up with me as I was working two jobs at the same time and I reached a point where I had to choose one over the other because I couldn’t keep up with the pace of them both any longer.”

Saype started experimenting with painting street art in the countryside when he realised that the visual pollution in cities meant that nobody was noticing the graffiti anymore. Drones also became accessible to the public, meaning that he could experiment with large-scale pieces designed to be seen from above.

All of the art that Saype creates is designed to fade away. He prepares the paint he uses himself with natural ingredients, meaning that it does not have a lasting impact on the environment, unlike industrial paint.

He said: “I can impact people and society, without impacting nature. I like the idea of leaving the seeds of my work in people's minds as they disappear.

“As well as this, my approach is based on one of the pillars of Buddhism, namely impermanence: everything is in perpetual evolution, wanting to stop it is unnecessary cause of suffering since by essence it is not fixed. To become aware of this you have to learn not to try to fix things or situations into place, and by extension, to avoid unnecessary causes of suffering.”

The next stop for the artist is Berlin, where he will take part in celebrations to mark the 30th anniversary of the fall of the Berlin Wall. However, the project will not end there as Saype plans to visit over 20 countries in the next three to five years to continue painting the human chain.

Saype, named by Forbes magazine as one of the world’s most influential people aged 30 and under, claims that the project has reached at least 120million people all over the world so far.

The artwork is made up of a series of large-scale, biodegradable paintings of interlocking hands, which Saype aims to recreate on different landscapes globally in an attempt to create the largest human chain in the world.

The hands reproduce the first gesture made by the volunteers of SOS Méditerranée when they rescue migrants from the sea. They are also symbolic of Saype’s belief that it is only by working together that humanity will be able to respond to the various challenges it will have to overcome.

He said: “The project led the Swiss government to request that their flag be given to the SOS Méditerranée boat, the Aquarius, when it couldn’t sail due to European migration politics repeatedly causing countries to revoke their flag licences.

“It was an incredible example of how art can serve human beings and can change things in different levels of society. It was a desire to encourage kindness and mutual aid that inspired the project.”

The first work was painted in Paris in June this year and it was quickly followed by works in Andorra and Geneva.