Cookie Consent by FreePrivacyPolicy.com Departure point is a fine destination in its own right French News and Views in English | The Connexion
17 may 2021
Classifieds Currency exchange Newsletter
Login Register BASKET
Facebook Twitter

Departure point is a fine destination in its own right 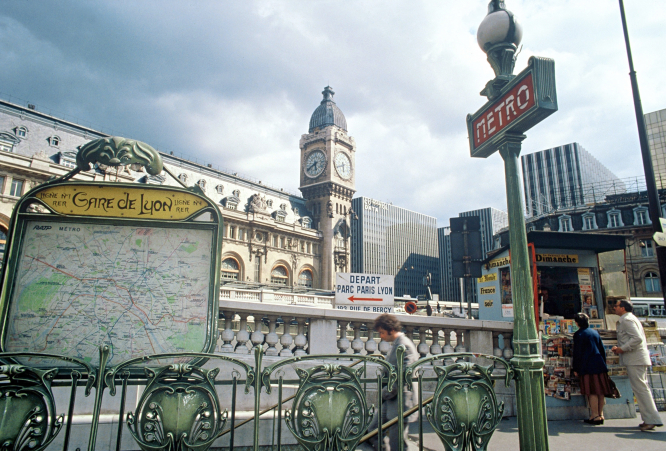 There is no derogatory term for a trainspotter in French. Instead there are les passionnées de chemin de fer, or railway enthusiasts, and if indulging their passion means hanging out in the Gare de Lyon in Paris, who can blame them? The station’s architecture recalls a time when train travel was glamorous; when passengers expected not only comfort but beautiful art and fine cuisine as part of their journey.

Named for one of its principal destinations, the Gare de Lyon was built for the World Fair hosted by Paris in 1900. Like Le Grand Palais and other buildings constructed for the same event, it was designed by its architect, Marius Toudoire, to show off the culture and wealth of the French capital in opulent style.

It also acted as a grand showcase for the successful Paris-Lyon-Méditerranée (PLM) train company, whose trains ran from the capital down to the French Riviera.

The palatial station replaced an earlier stop, known as the Embarcadère de chemin de fer de Paris à Monterea, which was opened as a wooden structure in 1849 then replaced in 1855 by a permanent building designed by François-Alexis Cendrier. This burnt down in the fires that marked the fall of the Paris Commune in 1871, only to be rebuilt precisely as before, and there it stood until the start of the next century.

Toudoire’s design for the Gare de Lyon incorporated a vast glass-domed hall; a grandiose stone façade looking on to what was then Place Diderot; a “fresco room”; a quality station buffet; and a magnificent clock tower.

At 64 metres, or 400 steps, tall, and bearing an uncanny resemblance to London’s Big Ben, this tower has become a point of reference for all Parisians. The clock itself was designed by Paul Garnier, who supplied clocks for all French stations. Its face is nearly six and a half metres wide, its hands each span three metres, and each of the metre-long Roman numerals has been hand-painted.

The quality station buffet has similarly evolved to become something of a Paris institution. Le Train Bleu, named for the famous Paris-Vintimille sleeper train that ran to the Côte d’Azur, is situated at the top of an imposing stone staircase inside the station. Its Belle Epoque interior was the result of a collaboration between 27 French artists, who produced paintings of the various destination cities served by the station to adorn the walls and ceilings.

The restaurant was classified as a historic monument in 1972, saving it from irreparable decay, and it still feeds well-heeled travellers today.

Marseillais painter Jean-Baptiste Olive was commissioned to paint scenes from southern France to adorn the walls of the station’s fresco room. These, too, are still in evidence, although the room has now been converted to the rather mundane function of a ticket hall.

The station offers something for literary aficionados too: it was here that Ernest Hemingway’s wife, Hadley, had a suitcase full of her husband’s manuscripts stolen.

It is also the backdrop for Agatha Christie’s Hercule Poirot, as he sets out to solve The Mystery of the Blue Train.

Setting aside all this evident grandeur, the place of real interest to those passionnées de chemin de fer is underground. In 1900, Gare de Lyon was the first French métro station to be built in shallow ground and opened to the air. Constructors simply dug a big hole in the street, into which they inserted a structure of cast iron columns supporting metal beams, over which a metal roof was finally placed.

In the current métro station the original supporting columns have been painted bright yellow, a cheerful reminder of the innovative techniques that put it there in the first place.