Explore the painted churches of the Pyrénées 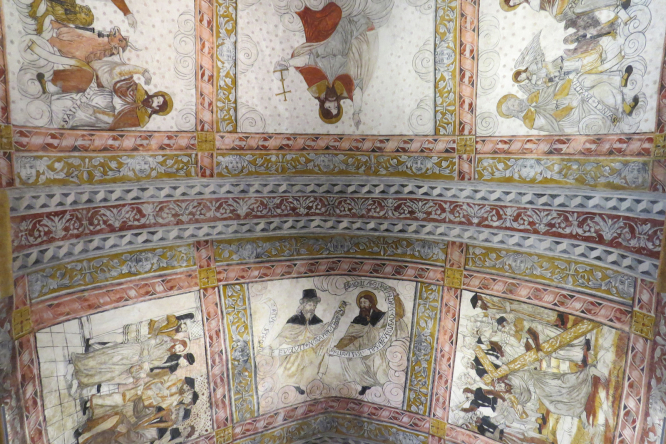 Painted panels on the vault of the church at Mont (pictured) are among the beautiful art findings in the Pyrenees Pic: Julia Faiers

Great are the rewards for those who climb to the mountain-top churches of the Aure and Louron Valleys in the Hautes-Pyrénées, bordered by Gascony, Bigorre, Comminges, and Aragon in Spain.

These days, providing you have a head for heights and a car that can whip round hairpin bends, anyone can reach these diminutive churches with their jewel-like painted interiors.

Think back to the Middle Ages, however, and it was a different story entirely. Masons, carpenters and painters faced an arduous ascent to build and decorate these holy edifices, their work determined largely by the rhythm of the seasons.

Worshippers had an equally demanding trek. Imagine, for example, a party wending its way up narrow paths to baptise a new baby at the font in the church of Saint Calixte at Cazaux-Fréchet, or bearing the deceased to their final resting place in the cemetery of Mont.

The church of Saint Calixte in the tiny hamlet of Cazaux-Fréchet was built because of a local legend which varies according to who you ask. Two cousins, Calixte and Mercurial, came from Aragon (or Germany) to the Louron Valley in the tenth century to fight Moorish invaders.

Calixte was killed by an enemy sword, or possibly taken prisoner and then killed when he refused to renounce his faith. His cousin Mercurial followed him heavenwards shortly after, also at the hand of an enemy sword. Despite their deaths, the Christians saw off the invaders, and so the local inhabitants swore they would build a church to honour the knights’ sacrifice. Calixte was commemorated at Cazaux-Fréchet, on the site of his burial place, while the people of Vielle-Louron built a church in honour of Mercurial.

At the church in Cazaux-Fréchet, Calixte’s life can still be seen immortalised in the black-and-white miniature scene of the battle of Saint Calixte, painted in the eighteenth century on the vault beams, and in a sixteenth-century, locally made wooden statue of the saint sitting stiffly on a horse that looks anything but ready for battle.

This artefact has faced its own challenges in more recent times. It was stolen one night in 1981, and found eight years later at an antique shop in Montpellier. The commune bought the statue and returned it to its rightful place.

A grander rendition of the saint, a painted, gilded statue, can be seen on the left side of the eighteenth-century retable (large altarpiece) which fills the east end of the church. The various depictions of Saint Calixte in the church span hundreds of years, showing the enduring local appeal of this foreign martyr who died on their doorstep in the tenth century.

At Mont, bold, brightly coloured paintings cover the external south wall of the twelfth-century Romanesque church of Saint-Barthélemy. And this is but a taster of what lies within. A nineteenth-century restoration programme revealed paintings on every wall, hidden beneath a layer of lime wash. On the vault over the choir, a starry sky concealed the spectacular paintings of the Assumption on the north side, and the Tree of Jesse on the south.

The renowned artist Melchior Rodigis, who worked initially at the cathedral of Saint-Bertrand-de-Comminges, undertook the ambitious painting programme at Mont from 1564. A contract detailing the project miraculously survives, and sets out clearly what the artist was required to paint — an Assumption and Tree of Jesse, the apostles, the life of Saint Barthélemy (Bartholomew), God the Father and the four Evangelists.

The document also instructs him to paint the vault of the nave, the chapel, and the base of the bell tower, where we can still glimpse a couple of his glorious, grinning skeletons.

Some of the area’s ecclesiastical painted treasures have only been rediscovered very recently. The magnificent Romanesque murals in the church of Saint-Pierre-aux-Liens at Eget, which date from the first half of the twelfth century, were found behind the retable in 2016 during a restoration programme. When the restorers first laid eyes on the brightly painted figures of the Nativity scene, it must have felt like all their Christmases had come at once.

These lofty, remote mountain churches appear to us now as outposts of medieval faith, but for the people who made them and worshipped there, they represented the very centre of their world. Christian devotion bursts forth from every surface, the stories of their faith painted meticulously for all to see, even now.