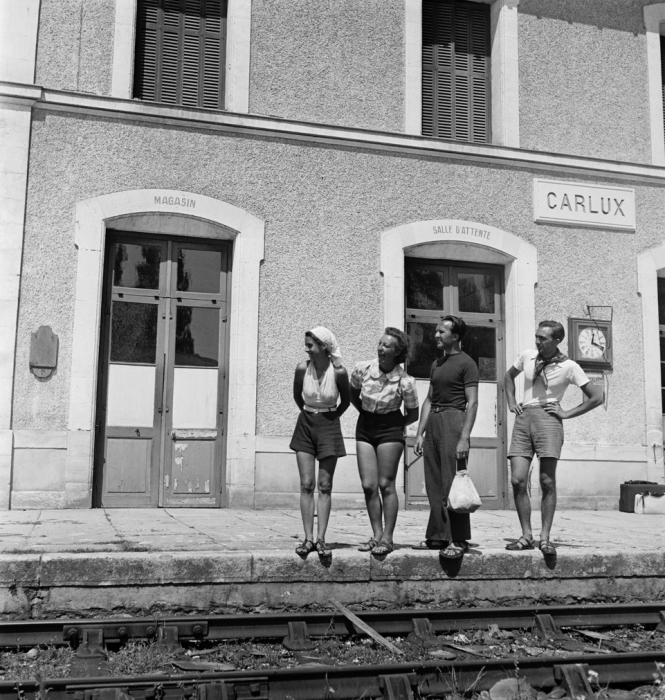 This image taken at Carlux station by photographer Robert Doisneau and shows his wife and friends. The station is now a museum dedicated to his work
By Jane Hanks

Rural railway stations are a distinctive feature of France’s architecture. Many no longer have trains stopping but they have been given a new lease of life as homes – or even as a museum or arts centre.

SNCF says its policy is to keep these buildings where possible as they are part of its heritage. It wants to find partners to work with so stations can be shared and
the buildings given new life.

Lionel Treussard, regional projects director for SNCF Gares et Connexions, said nearly all were built from the mid-19th to the start of the 20th century.

“They were constructed as the railway network extended over the country. At that time, there were several different private railway companies. SNCF was not created until 1938,” he said.

“Some companies were very big, such as the Compagnie du Chemin de Fer de Paris à Orléans (PO) and the Compagnie des Chemins de Fer de Paris à Lyon et à la Méditerranée (PLM), and some were very small, later to be taken over by the bigger ones. Each company built its own stations and each one had a catalogue with designs for each category of station and building, depending on its function and importance.

“Often they would own their own construction companies, quarries and factories meaning that in one region stations are all likely to look very similar, though there are differences, according to the immediate building materials available.

Basic designs resembled each other all over the country as they all needed an entrance hall with a ticket office, and then possibly other rooms to stock equipment for mending the rails, perhaps a waiting room and a toilet, usually outside.

Some had a first floor, with living accommodation for the station master. The upstairs windows are smaller, as befits a private residence while the ground floor windows and doors are much bigger.

They are solid buildings, built to last, and nearly all are square or rectangular.

“They were built to be functional,” said Mr Treussard.

“Their shape meant they could easily be enlarged, by building on to a straight outer wall, or made smaller by knocking down an extension.

“It was vital they could be easily adapted as lines grew or diminished in importance. However, they were not just thrown up overnight. They were built to very high standards by skilful craftsmen.”

He said many stations were centrally located in a small town or village. Where they now have only a few passengers, they can also, for example, be used as a maison public, a central place with public services such as post office and social services all together. The government intends to create one of these in every canton.

Changing use of stations, though, is controversial, because it also means reducing the number of SNCF employees, as machines replace ticket-sellers, and reducing yet more services in rural areas.

SNCF stations that have been sold off are now used in a variety of different and often imaginative ways, though they remain immediately recognisable.
Many have kept their name in big letters on the façade, and some the outside clock.

They all have their own local history, which still resonates in the buildings. At Carlux, Dordogne, the station, which opened in 1884 and closed in 1978, has been bought by the local authority and turned into a museum dedicated to photographer Robert Doisneau, a tourist office, café and exhibition space.

Doisneau, born in 1912, used to come to the station on holiday and pride of place is given to a photograph he took of his wife and friends on the platform waiting for their train.

A couple in Lamothe-Landerron, Gironde, have turned the former station into a local cultural centre, with theatre, dance and music shows bringing art to
a rural area.

Owner Philippe Girardi lived opposite as a child and has called his association Sans-Crier Gare, a play on words, which translates as “Out of the Blue”, perhaps referring to the unexpected way the future of the old station has evolved.

The station at Saint-Sever, Landes, was built between 1883 and 1890 and is now home to the local rugby club.

Another, at Bedous, Pyrénées-Atlantiques, sits alongside a functional railway line and the platform is still used as trains stop there.

However, the building has been turned into a restaurant, hotel and spa.

There is room for accommodation as it was also the station master’s home. It came into service as a station in 1914, but the line was closed in 1985. Trains ran again on the line in 2016 but the station was no longer used and it was sold in 2018.

The restaurant is called Transhumance & CIE, in reference to the fact that – from 1931 – there was a special price for shepherds, who took the train with their flocks to move them to new pastureland.

The station still has its name and distinctive clock on show.