How to be a space tourist...on terra firma 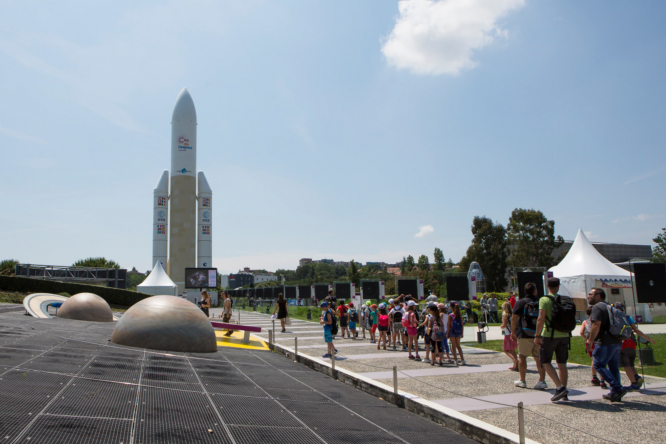 The ‘Cité de l’Espace in Toulouse is not just another theme park. It aims to provide real education about space exploration in a way that is accessible and interesting to everyone from children to space geeks.

The history of space exploration is described in detail, as are all the technical developments, and daily life in space. What is it really like spending Christmas Day on the ISS? Do they get Christmas dinner? (Yes, but if you hold your nose while you eat you’ll get an idea of how tasteless food is in space). How do you go to the loo in space, where everything (yes, everything) floats? (The answer is: with caution!) It is a fascinating trip through a completely different world.

When I visited, the highlights were definitely the “walking on the moon” experience and curling up in a real, genuine Soyuz capsule (inset). On the ISS there is almost no gravity, but there is a little more on the moon. Astronauts walking on the moon weigh six times less than on our earth. To see what that is like, you are strapped into a seat attached to the ceiling by massive springs, which then allows you to walk on a replica of the moon’s surface. It’s a very bizarre experience, and hugely fun of course. You only need the slightest touch of your foot to send you bouncing high off the ‘moon’.

You can also explore a Russian training replica of a Mir space station, exploring the controls and seeing the upright pods where astronauts sleep, but for me the highlight was curling up in the seat of a Soyuz capsule, ready for take-off. The Cité de l’Espace has a real capsule, which was constructed for training purposes, but which has never actually flown.

A Soyuz rocket has three sections; an orbital module which provides accommodation for the crew during their mission, a service module containing instruments and engines, and a re-entry module which returns the crew to earth. Here, astronauts lie on their backs in an almost foetal position in order to withstand the vibrations of take-off and landing. Each one is tailor-made for each astronaut, again in order to give maximum support and protection, so the Soyuz capsule which transports crew members to the ISS then stays there until the same people use it to return to the earth.

The orbital and service modules are destroyed during re-entry to the earth’s atmosphere; only the re-entry module survives, but it is so heat-damaged that it cannot be used again.

At the Cité de l’Espace you can climb into the Soyuz module and curl up in an astronaut’s seat. Imagine what it must be like to know that you’re about to be launched into space – it gave me a tantalising glimpse of the fear and excitement that astronauts must feel, however well-trained and prepared they are.

Elsewhere in the Cité, there is an interactive exhibition explaining some of the skills astronauts learn, including doing dexterous tasks upside down, and catching a ball you can only see in a mirror.

The Cité de l’Espace also keeps up with current events in space. Philippe Droneau, the Special Advisor to the CEO says, “We don’t aim to be a theme park or even a museum. We aim to provide a window giving a view of space exploration as it happens. For example, this autumn when the Franco-German robot MASCOT landed on an asteroid, we did an all-day live broadcast open to the public.”

If you want to meet an astronaut, he suggests attending one of the evening events. “We often have talks where the public can ask questions. Last year we had 110 astronauts here for a conference.”

For the 50th anniversary of the first human steps on the moon, the Cité de l’Espace is planning a series of special events and celebrations throughout the year, plus a major commemoration on July 20. Full details will be available at www.cite-espace.com nearer the time.

7 hours ago
4
French farmhouse renovation: DIY tricks to get rid of rats