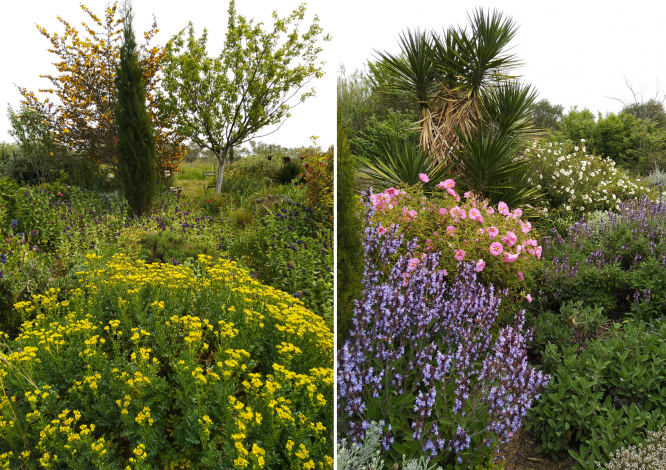 Le Jardin des Rossignols was named such because there are always nightingales in the summer Pic:

Le Jardin des Rossignols, Popian, Hérault is a Mediterranean dry garden designed in a wild prairie style and full of botanical Mediterranean plants, which will be open by appointment for Open Gardens/Jardins Ouverts from April 18 up to July 15.

Last year, the charitable garden viewing association decided not to open any gardens, because of the Covid-19 situation. But this year the association which encourages gardeners of all nationalities to open up their gardens, big and small, to the public, to raise funds for charity, is back in action, with health protocols in place.

A Scottish gardener’s hideaway in Hérault

Le Jardin des Rossignols was created by Catriona McLean and her husband Charles when they moved to France from Scotland in 2005 from open uncultivated vineyard land where nothing was growing other than a few vines and fruit trees. They called it Le Jardin des Rossignols, because there are always nightingales in the summer:

“I was a passionate gardener in Scotland and I was involved in the UK Open Gardens scheme,” says Catriona McLean. “When we moved to France we lived at first in an apartment with no land. One of the first things we did then, was to find a place to create a garden and we found this 3,000m2 piece of land, bordered by the Canal de Gignac, which is about five minutes’ drive from our home.

'The first thing I had to do was to learn about a very different type of gardening, and so I did everything I could to study Mediterranean gardens'

"I joined the association, Mediterranean Gardening France, visited other gardens and nurseries and looked at what was growing in the wild.”

She found irises, salvia, thyme, and rosemary in the countryside, and where there were big clumps she took a sample and planted a specimen in her garden to begin to create a tapestry of plants:

“I found wonderful fuchsia pink Gladiolus byzantinus, for example, which you can buy in nurseries in the UK, but here they were growing wild. I found wild Provençal bamboo and used it to weave into trellises to line the paths. Rosemary is a classic Mediterranean plant and I have ten different ones with pink, white, dark blue and pale blue flowers. There are eight or 10 different lavenders, not just in purple but also in white and pink.

“Salvias are a great success. They flower in June and July and I then trim them back in August and September when they start to get a bit straggly and then they take off again and can even be in flower over Christmas.”

Alliums, nigella, euphorbias and cistus are in abundance. There are also grasses which thrive in the dry conditions such as Stipa tenuissima and Stipa Gigantea.

“I found his philosophy of gardening absolutely fascinating and I got totally absorbed in it. He taught me that when you introduce a plant into your garden you should only water it once or twice during its first season and after that, normally not at all. You have to be cruel to be kind. If you overwater at the start the root ball will stay at the surface expecting water from the top. If you leave them to their own devices, they will grow deep down to find the moisture they need. The winter rains usually mean there will be enough water to see the plants through the summer droughts.”

There are some 27 olive trees with 6-7 varieties planted nine years ago and now giving a crop which she takes to the local co-operative to be turned into oil.

But there are not only typical Mediterranean plants here:

“I have been growing roses since the beginning in 2005. We have had some failures along the way but once they have become established with help in the early years, they perform really well and flower abundantly from May onwards. You have to choose the right varieties as there are native roses from countries with similar conditions such as the Rosa Banksiae which is a rampant climber from China and needs no watering once it is established. Other roses include the Rosa Mutabilis and the Rosa Sanguinea.”

In April irises, including a miniature variety will be in flower, as well as the tulips: “Tulips originally come from Turkey and the Middle East so they are happy here and grow back every year. I have planted them in unusual combinations, mixed in with the lavender. I have loved making textures and patterns with the planting.”

In Scotland, aquilegias were a big favourite, and so she persevered in what was an unlikely setting: “I discovered that if I planted them in areas where they would be sure to be in deep shade during the hottest months they would survive.”

Another technique learnt from Olivier Filippi is allelopathy, which is a way some plants manage to produce a chemical which deters other plants from growing near to them. He has an experimental garden showing how to grow plants which will inhibit and disturb the growth of other unwanted ones.

“Phlomis is a good example,” says Mrs Catriona McLean. “When it drops its leaves they leach toxins into the soil to prevent other plants from growing there. It means the species can grow in uninterrupted clumps, which shades the soil, preventing it from drying out and helping the plant survive drought.”

She always has a new project. This year she is creating a yucca and cactus garden in memory of her husband, Charles, who sadly passed away recently: “I did not know anything about cacti until recently and I am finding them fascinating.”

Anyone wishing to visit the garden must ring in advance, as the garden is not adjoined to the house. It will be open from April 18 up to mid-July, from 14-18h00. Catriona McClean says the garden will be lush and green in April. The garden is at its best in Spring until the end of June and then in September and October after the first rains. She will be delighted to show visitors around and talk about Mediterranean gardening.