Look to see many different styles of la ville rose 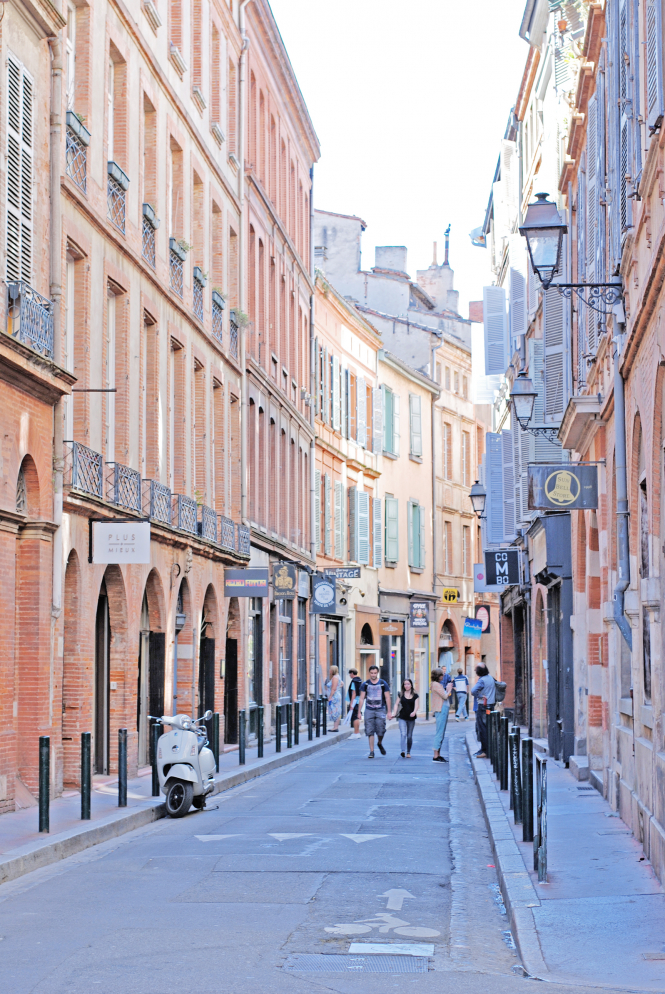 Toulouse is known as the Pink City, la ville rose, taking its name from the bricks in its buildings, which glow pink as the sun sets on a summer’s day.

Brick has been the main building material here since Roman times. Sited on the valley floor of the Garonne estuary, Toulouse has no stone, but plenty of clay, and as this contains less iron oxide than the clay in northern France, the bricks are closer in colour to pink than red.

There is a sense of uniformity in the architecture of central Toulouse: elegant streets with three or four-storey buildings in brick with iron work and balconies and built on a street plan which has changed little in 2,000 years, since the Romans.

If you look closer, however, you will spot the telltale signs that allow you to date the buildings and show that there has actually been considerable reconstruction.

The colour of the brick is one clue. “In the 19th-century chalk was added to the clay to make a paler brick,” said Mrs Ceruti. “There were two reasons for this. At the time there wasn’t sufficient lighting at night and so local regulations stipulated that buildings had to be coloured white to give greater luminosity. One way of doing this was to use a paler brick.

“The other reason was to imitate the stone used in Paris to create the Haussmann style, which was fashionable. In the 20th century, it reverted to a darker tone.”

The size of the windows is another clue. “There was a period in the 18th century when very high windows were a sign of prestige, and buildings dating from that time can have tall narrow windows, with an arch in glass at the top.

“It was soon realised that this meant the rooms were expensive to heat and so the practice ceased in the 19th century.”

Ironwork gives more clues as many façades have balconies: “However, not the earlier ones”, said Mrs Ceruti.

“Buildings before the 19th century only have ironwork on the first floor and these are not balconies but protection grills over the windows.

“It was not until cast iron was invented that actual balconies became fashionable and can be seen on all three or four floors.

“There is another detail, which you can see on some buildings.  They are lambrequins, decorative structures at the top of windows introduced for a specific reason.

“Toulouse is known as a windy city. Exterior shutters can cause an awful lot of noise if they are loose in the wind and bang and clatter open and shut so in some houses the shutters were moved inside.

“This created a new problem as in the hot summers the interior shutters could not be
closed to keep out the light without closing the windows first, and with 35C temperatures that became unbearable.

“So a blind made of straw was hung over the open windows. They were not very attractive and, when they were folded up, they were hidden behind a lambrequin. These decorative structures can be seen in other parts of France, but they are used in Toulouse for this unique reason.”

Though brick is the main building material, stone and wood played their part.

As far back as Roman times, stone was shipped down the Garonne from quarries in the Pyrénées, 70km away. It was more expensive so its use was limited to structural features around doors and windows, and for prestigious buildings.

Wood was also widely used until the mid-15th century, when it was forbidden in town centre buildings because of fires.

In 1463, fire fanned by the local vent d’autan destroyed two thirds of the city but you can still see at least 250 buildings with wooden structures which pre-date the fire.

The largest buildings, such as the Basilique Saint-Sernin, needed thick walls, so a gap between two thin brick walls was filled with rocks from the river to make them stronger.

Originally, bricks were made beside the construction site but the kilns sent many buildings up in smoke so the briqueteries were moved out of town. Toulouse still has industrial brick factories in the suburbs.

The city was at its wealthiest during the Renaissance due to its production of the pastel plant, Isatis tinctoria (woad), the leaves of which give an indelible blue dye.

Toulouse became the most important producer in Europe as its plants gave the strongest colour. As a result, wealthy merchants could afford enough land to build houses around a courtyard. Many examples which can still be seen through archways as you walk the streets in the centre.

You can visit some, one example being Hôtel d’Assézat which houses the Bemberg collection of art by Picasso, Modigliani, Matisse and Toulouse-Lautrec.

The tourist office offers guided visits throughout the year (some tours are in English) toulouse-tourisme.com/visites-guidees