Make a beeline for these French record-breakers 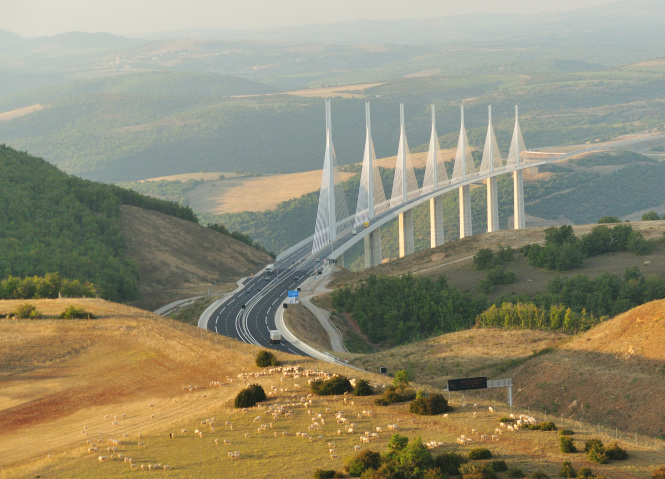 Millau’s spectacular viaduct, the tallest bridge in the world
By Samantha David

Travelling around France is always amazing; from one region to another everything changes – the geography, cuisine, local culture and even the climate. France is also blessed with a multitude of record-breaking attractions, curiosities and installations. Seeing them all could take a lifetime, but here we present a few favourites.

The largest underground church in Europe is the Eglise Saint-Jean in Aubeterre-sur-Dronne, an hour north-east of Bordeaux, in Charente. It was originally hewn out of the rock in the 8th century and then enlarged in the 12th and 13th centuries by Benedictine monks, probably as a safe place to keep relics and treasures.

In 1794 it was abandoned as a church, and used by French revolutionaries for making saltpetre (needed to fire canons). It was subsequently used as a burial site until 1865 but a rockfall buried the entrance and it was forgotten. Re-discovered and restored, it is now visited by around 65,000 people a year.

The ‘Cimetière des Chiens et Autres Animaux Domestiques’ in Paris’ north-western suburb of Asnières-sur-Seine, is Europe’s oldest pet cemetery. Catering for the pets of the wealthy, it contains the graves of dogs, cats, horses, monkeys, lions and even fish.

For a small consideration you can explore the grounds which contain many ornate sculptures and dog kennels, many of them decorated with canine toys. Rin Tin Tin is buried here, along with the pets of composer Camille Saint-Saëns. There is also a memorial statue of Barry, a St Bernard mountain rescue dog credited with saving the lives of 40 people.

The cemetery is a fascinating monument to human love for pet animals, and reading the inscriptions conjures up touching stories of beloved pets. At the back of the cemetery is a house where they look after stray cats.

Largest cave open to the public

The largest cave in France which is open to the public is the ‘Grotte de la Verna’ near Sainte-Engrâce, near the Spanish border, south-west of Pau in Pyrénées-Atlantiques. An access tunnel was constructed to allow it to be opened to the public in 2010.

The cave is a perfect natural dome shape, 194 metres tall, 220 metres wide and 250 metres long – large enough to accommodate the Notre Dame de Paris cathedral ten times! It was only discovered 50 years ago and has not yet been completely mapped. The entire complex contains multiple galleries which you can walk along, depending on which guided tour you take. Guides still explore the network in their spare time.

Tallest bridge in the world

The Millau Bridge on the A75 motorway from Paris to Montpellier is the tallest bridge in the world, spanning the gorge valley of the River Tarn and bypassing the traditional market town of Millau. It cost around €394million, construction took three years and it opened in December 2004 to worldwide acclaim.

The sides of the bridge are clear so that drivers and passengers can admire the stunning views as they travel over the bridge (it is only accessible by car) but to get the most out of the experience stop at the ‘Aire du Viaduc de Millau’ because the old exhibition space which used to lurk underneath the bridge has now been moved into new quarters at the motorway stop.

As well as the exhibition explaining precisely how the bridge was constructed, there are good vantage points for photos and selfies, plus a souvenir shop. As to whether the views are better travelling south or returning north, well the locals are still arguing about it.

Nausicaä , the French National Sea Centre, in Boulogne-sur-Mer, just round the coast from Calais in Pas-de-Calais, has just been renovated and a massive new extension is due to open on May 19.

The new building, in the shape of a manta ray, will house around 60,000 sea creatures making it one of the largest aquariums in the world. An 18 metre long tunnel through the water will make it possible to view marine life almost first hand.

The centre also offers exhibitions and displays which explore and explain the marine environment and how it relates to human beings, in a scientific but accessible way. (Nausicaä is the name of the woman in Homer’s Odyssey who helped Odysseus when he was shipwrecked.)

The largest organ in France

The Cathédrale Sainte-Cécile in Albi, north-east of Toulouse in Tarn, is spectacular in its own right, but it also contains the largest organ in France.

Construction of the cathedral began in 1282 and took around 200 years; it is said to be the largest brick-built building in the world. The exterior is reminiscent of a fortress but inside it is richly decorated; almost every available surface covered with ornamentation and gold paint.

The organ, constructed in the 1730s, is enormous – 16.4 metres wide and 15.6m tall with four keyboards and pedals, 55 stops and 3549 pipes. It has an extraordinary range of sounds, so if you get the chance do go to a concert there.

The instrument has been renovated many times since its construction and remains a town treasure, while the superbly preserved Last Judgment fresco beneath it could place the cathedral on our list of most scary places.

The smallest house in Paris

The house at 39 rue Château d’Eau in the 10th arrondissement of Paris is easily overlooked. In fact, in some ways, it is not really a house at all since it is only the size of the modest front door.

Originally, the space was just an alleyway between the two buildings, measuring just 1.40 metres across. The house is just three metres deep, and the room on the upper floor is not accessible from the downstairs. You get to it from Number 41, and it was for many years entirely filled by a child’s wooden cot.

You may think this is small, but the owners of a house in Bayeux claim that their gîte, which used to be a lockkeepers workshop and has a surface area of only 16m2 is the smallest in France. It is possible to try the place out as it is listed for holiday lets on all the major booking sites.

The highest dam in France

The artificial ‘Lac du Chevril’ just 6km east of Tignes in Savoie, was formed by the construction of France’s highest dam, 1790 metres above sea level. It was built in 1952, and is only about 10kms as the crow flies from the Italian border.

The dam is built on the Isère river, which feeds into the Rhône. The lake holds 235 million cubic metres of water and is 181 metres deep. It not only supplies water, but also much needed hydro-electricity. Water engulfed the original village of Tignes, displacing 400 inhabitants despite their efforts to prevent construction (including sabotage).

The village was, however, permanently flooded in 1952 and the dam was formally inaugurated in 1953, which is why the ski resort was entirely rebuilt in the second half of the 20th century. The lake was emptied every 10 years by EDF in order
to inspect the dam, which in 2000 gave the ex-inhabitants of the old village the opportunity to organise Mass in the flooded ruins of their old church before it once again disappeared under the icy water. Today, inspections of the dam are carried out by submarine robots meaning there are no plans to empty the lake again.

The département of Cantal forms part of France’s ‘Massif Central’ region of mountains. Right in the centre is the ‘Massif du Cantal’ which is in fact a three million year-old volcano with a diameter of 70 kilometres. It is estimated that it was very active approximately eight million years ago but that the last eruption created the ‘Plomb du Cantal’ at about 1858 metres. The entire area is now very popular with hikers who appreciate the mix of rolling valleys and peaks.

French riding federation FFE runs the ‘Parc Equestre Fédéral’ in Lamotte-Beuvron, south of Orléans in Loir-et-Cher. The concept is a club for clubs to use – it offers 520 horse boxes, a 3* hotel, 200 dormitory beds, three restaurants, three huge indoor riding arenas and more than 740 acres of paddocks, training areas, tracks and carparks stretching farther than the eye can see.

This is where clubs (particularly those from Paris) hold riding competitions, gymkhanas, tournaments and rodeos. Clubs can also come for training weeks and hold riding courses there, hiring facilities and bringing their own horses, trainers, instructors, equipment and pupils. The Federation has many permanent offices at the centre, as do various other horse-related federations. National teams train at the park too.

The centre does not confine itself to horse-related events, however, and also hosts all sorts of other events including classic car exhibitions, the European Dog Sled Championships, and the Game Fair (devoted to hunting). The ‘Generali Open de France’, held every July, is the largest equestrian event in the world, according to the Guinneslss Book of Records 2012. It attracts 15,000 riders and 25,000 visitors per day.