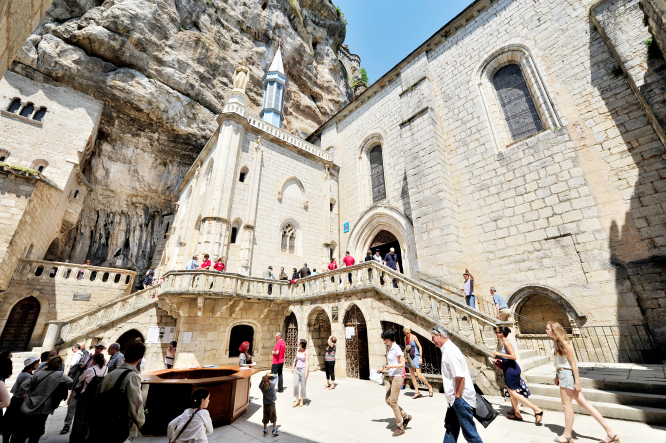 Pilgrims have been visiting Rocamadour in the Lot for over a thousand years and the dramatic village with its sanctuary and chateau built up against and on the cliffs, now attracts over a million tourists a year, as well as modern day pilgrims.  I have visited it many times and at every turn there are more secrets and legends to discover.

To get to the sanctuary at the heart of Rocamadour you first have to climb the 216 steps of the Great Stairway which have been climbed by pilgrims, often on their knees for hundreds of years.

It seems always to have been regarded as a sacred place. There is a cave with prehistoric wall paintings, which specialists say show it was a pre-christian sanctuary.

It is known for certain that pilgrims started coming here to pray to the Virgin Mary before the year 1,000AD.

Then in 1166, a perfectly conserved body was discovered under the Chapel of the Virgin, and when it was placed near the altar, miracles started happening. It was decided this meant it was the body of the hermit, Saint Amadour, after whom the village is named.

There is a theory that Amadour was in fact the biblical character, Zacchaeus, who fled to France to escape persecution and lived out his days in solitude in Rocamadour.

The miracles attracted growing numbers of pilgrims and at times there could be up to 30,000 from all over Europe. Among them were Kings, the first of whom was Henry II of England, followed later by Philip VI and Louis XI of France.

In the Chapelle de Notre-Dame, one of the seven chapels in the sanctuary, you can still see the simple, 12th century wooden statue, known as the Black Virgin, the Notre Dame de Rocamadour who was called on by the sick, by prisoners and even by sailors out at sea to save them.

In 1172 a book, the Livre des Miracles, was written to tell the tales of some of these miracles. Hanging from the roof of the chapel are models of boats that were saved from shipwreck as well as the cloche miraculeuse, an 8th century cast-iron bell which is said to ring out whenever there is a miracle.

Rocamadour also has a legendary sword, said to have belonged to the valiant knight, Roland, nephew of Charlemagne. As he lay dying from battle wounds he called upon the Archangel Michael to help him throw it so no-one could use it after his death. It landed several hundred kilometres away in the cliff at Rocamadour, where you can still see it, embedded in the cliff. (The sword features in the epic poem La Chanson de Roland).

At the top of the cliff is the chateau, where the monks have always lived. It has its own secret passageway, not open to tourists but my husband, Simon was invited into it after playing a concert there: “From the sacristy we were led through a door hidden in the panelling which took us up into the roof space of the Basilique Saint-Sauveur.

“We walked across it to another door that entered into the cliff where there were stairs cut out of the rock. There were faults in the rock that gave you amazing vistas of Rocamadour before we entered the chateau at the top.”