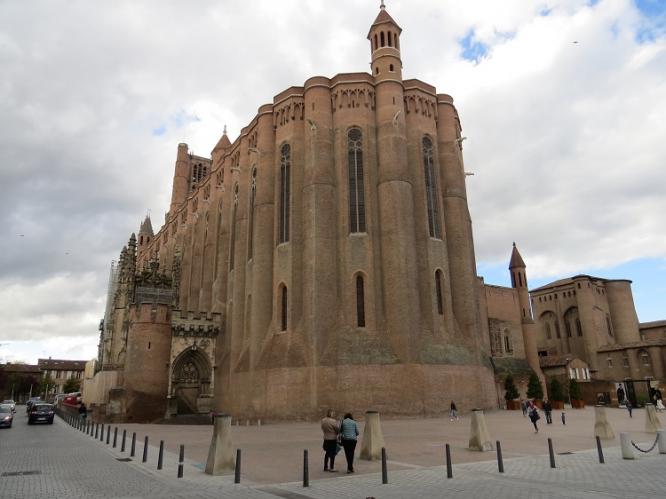 Albi cathedral, the imposing East end of the red-brick building
By Julia Faiers

Visitors to the southern city of Albi wonder at the looming bulk of its medieval cathedral, standing tall above the river Tarn.

Constructed from rosy brick rather than the stone of Gothic cathedrals in the north, Albi’s cathedral looks more like a fortress than a church.

Instead of delicate spires reaching up to heaven, this cathedral sports massive semi-circular buttresses that resemble defensive towers.

The windows are high, to prevent people from climbing up.

The cathedral could be defended from its machicolations – holes in the walls for throwing out projectiles or pouring burning liquids onto attackers.

From the time of its construction, which began in 1282, there was only one main doorway.

But why would a church, supposedly open to all Christian believers, be built with defence in mind?

The simple answer is that this cathedral spells out in bricks and mortar the aftermath of the persecution of the Cathars in 13th-century Languedoc.

It was built as a fortress of faith, to keep believers in and heretics out.

For those unfamiliar with the Cathar heresy, the Cathar religion offered an alternative route to salvation, one which challenged the fundamental teachings of the Roman Church and denied its sacraments of baptism and marriage.

The Church’s response was to crush the heresy. Thousands were murdered during the Albigensian Crusade, which began with a massacre at Béziers on 22 July, 1209, and ended in 1229, though resistance continued at a Cathar stronghold, Montségur, until March 1244.

So why was Albi cathedral built like a fortress, when the Cathar heresy had been stamped out some 40 years before the first brick of the cathedral was laid?

Many historians agree that the heresy was not wiped out but went underground, where it spread as a secret society, holding nocturnal meetings to practice the outlawed faith.

The Church was aware of the ongoing threat to its power, and in response created the fearsome Inquisition.

The biggest prizes for inquisitors were the Cathar spiritual leaders, Les Parfaits, whose punishment was to be burned alive.

Those escaping death sentences were imprisoned for life in underground cells.

Evidence suggests such prisoners were kept in dungeons beneath part of the bishop’s palace, called la Berbie (pictured left), next door to Albi cathedral.

While the feared Inquisitor of Languedoc, bishop Bernard de Castanet of Albi, entertained his elite guests in luxury surroundings, below ground men were being tortured for deviating from official doctrine.

No visitor to the cathedral today would guess its cruel history.

Inside, every surface shimmers. A 15th-century bishop of Albi, Louis d’Amboise, who was fond of commissioning art to celebrate God, invested a small fortune to beautify the previously barren cathedral.

Thanks to this wealthy bishop, the interior now sparkles as brightly as any jewellery box.

But there remains a vestige of the cathedral’s hidden link to heresy.

The bishop’s palace next door, which has housed the Museum of Toulouse-Lautrec since the 1920s, still reveals some of its medieval secrets.

Renovations which started in the 2000s unearthed a well-preserved floor featuring brightly coloured glazed tiles, many bearing the coat of arms of the Inquisitor, Bishop de Castanet.

Visitors can see the visual proof of orthodox ecclesiastical power by exploring beyond the galleries displaying Toulouse-Lautrec’s fin-de-siècle posters to discover the medieval salle palatiale, where a walkway takes you directly over the tiled floor and into the centre of the stately chamber.

It remains one of the largest surfaces of medieval tiled flooring in western Europe and is well worth the mini detour.

Exploring beyond the museum’s main galleries will also show the visitor an astonishing painted timber ceiling in the shape of an upturned boat.

Hidden for centuries beneath layers of whitewash, recent renovations revealed an exquisite series of paintings by Italian artists, commissioned by the bishop responsible for much of the cathedral’s internal decoration, Louis d’Amboise.

We can be sure no heretics were tortured in this bright and beautiful place!

The Albigensian Crusade by Jonathan Sumption (faber and faber, 1999)

The Cathedral of Saint Cecilia by Jean-Louis Biget (Editions Odyssée, 2007)