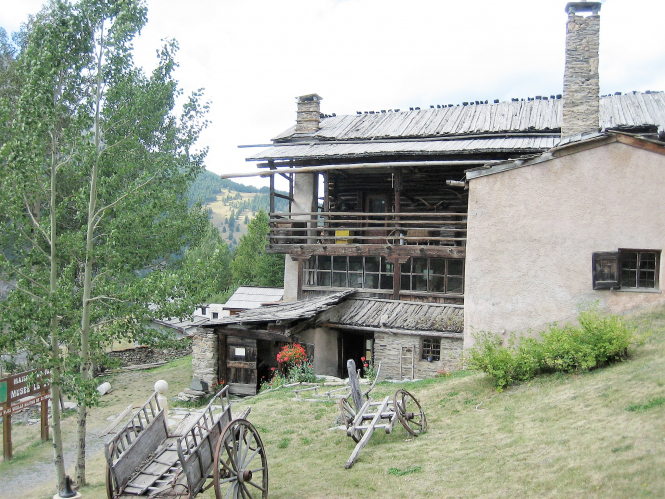 In summer
By Jane Hanks

Saint Véran is the highest village in Europe at 2,042 metres above sea level and is one of the Most Beautiful Villages in France. It is in the Southern Alps, in the Parc Naturel Régional du Queyras, not far from Briançon, the highest town in France at 1,326 metres.

Legend has it that the village was formed when a sixth-century bishop freed the lowlands from a dragon, which rose into the air and died in the mountains.

Local people marked this miracle by building a settlement where the dragon landed and named it after the bishop, Saint Véran.

Jacqueline Turina, who has lived in the village all her life and who gives guided tours to visitors, thinks the real story is rather more prosaic: that the bishop discovered the place on his travels to Rome and recognised the richness of the pastureland in the area.

Though high in the mountains, and covered in snow for seven months of the year, Mrs Turina says Saint Véran is a wonderful place to live:

“We face south with marvellous views and plenty of sunshine and the rich grass grows for a far longer period than further south.

“Transhumance has meant that sheep and cows have been brought up here from Provence for centuries, and this continues today.

“At first people only lived here in summer, but perhaps, one winter, the snow came earlier than expected and so people had to stay, and having done so once continued to do so.”

Another attraction to settlers were the copper mines which are even higher up and were mined as long ago as 2,000BC, right up until 1956. Historians believe the metal was originally mined by some Italian settlers.

To survive the long winters, the inhabitants built houses which are unique to the village, as their first floor, called a fuste and built of wood, is far bigger than in other areas because they had to store food and fodder there to last the long winter.

The ground floor has thick stone walls and families lived with no other heating than from the animals who lived in the same space.

Wood was precious and was kept for cooking and for building.

Next to the house was a small stone building called a caset. “This was built to shelter the family during one of the very frequent fires,” explained Mrs Turina.

“There was so much wood that a cooking fire could easily get out of hand.

“In the 16th century, the whole village was burnt down, and when it was rebuilt it was separated into five sections, each separated by a no-build zone which acted as a fire break.

“Each quartier was like its own small village, with a communal bread oven and a water fountain, also built in wood,with a lavoir attached.

“Wood is everywhere in our village.”

Two traditional houses can be visited in the village.

The oldest dates from 1641 and is run as a museum by the Parc Naturel Régional du Queyras.

In the second, visitors are greeted by the nephew of owners who lived there in the traditional way with animals to keep them warm in the winter until 1976.