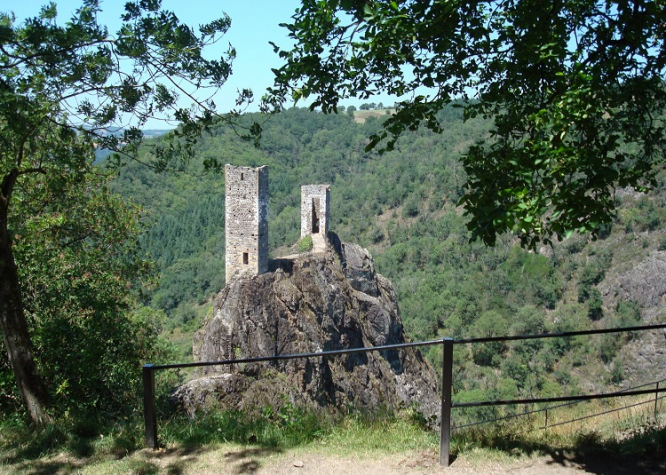 When you arrive at the pretty hilltop village of Peyrusse-le-Roc in the Aveyron, you could be forgiven for missing its hidden history, which for the most part is out of sight on the densely wooded slopes leading down into the valley below.

You might just have caught a glimpse, though, of the ruins of one of its chateaux with its two remaining towers perched perilously on the top of a rocky outcrop, which in days gone by was a strong and impenetrable defence against marauders.

The village now has around 230 inhabitants, but at the height of its prosperity in the 13th century, 3,500 people lived there and it was an important town in the region from the 8th to the 18th century.

Much of its wealth came from its silver and lead mines. At that period the people of Peyrusse-le-Roc lived on the slopes leading down into the valley; it was not until its decline that the population moved to its present situation on the top of the hill.

Thus the ruins of the earlier settlement, including a church, covered market, a bell tower, a barbican tower, a hospital known as l’hôpital des Anglais (no doubt because of English occupation during various periods), a synagogue, a leper’s house, a bridge, and a carved stone tomb called the Tombeau du Roi (it is assumed the unknown buried person had connections with the king), can only be seen if you leave the centre and walk down the steep footpaths leading away from the contemporary village.

The village began its rise in 767, when the armies of Pépin le Bref, the King of the Franks who was extending his territories south managed to seize the château of Peyrusse. From then on its destiny was linked to the history of the County of Toulouse.

For a short period, when Eleanor of Aquitaine divorced the French King, Louis VII and married King Henry II, the village came under English rule. However, this was not to the liking of the local population and the Médecy family, who may or may not have been linked with the Italian Medicis won back control for the French.

The village was at its most prosperous in the 13th and 14th centuries when it became a bailiwick, the chief administrative centre in the region responsible for 109 parishes.  It was home to around 40 noble families and other rich families settled there. There was an important Jewish community, hence the synagogue ruins.

Its position and strong walls also attracted people because it protected the population from the constant wars in the country. It must have been a bustling place, unlike today’s sleepy village, with two markets a week and several fairs during the year.

However, its fortunes began to wane with the Hundred Years War, the Religious Wars and the decline of the mines as the precious ore began to run out. In 1719, the village lost its bailiwicks right and its nobles and rich inhabitants began to leave.

The artisans lost their clients and little by little the population went into decline and with it its buildings. In 1783, records show that the church roof and its separate bell tower were in danger of collapsing.

It was not until the 20th century that the richness of its heritage began to come to light and now there are efforts to restore it. You can visit it for free but you are advised to wear hiking boots for the visit peyrusse-le-roc.ucom.fr