Cookie Consent by FreePrivacyPolicy.com Take a detour and pay a visit to a hidden charmer French News and Views in English | The Connexion
17 may 2021
Classifieds Currency exchange Newsletter
Login Register BASKET
Facebook Twitter

Take a detour and pay a visit to a hidden charmer 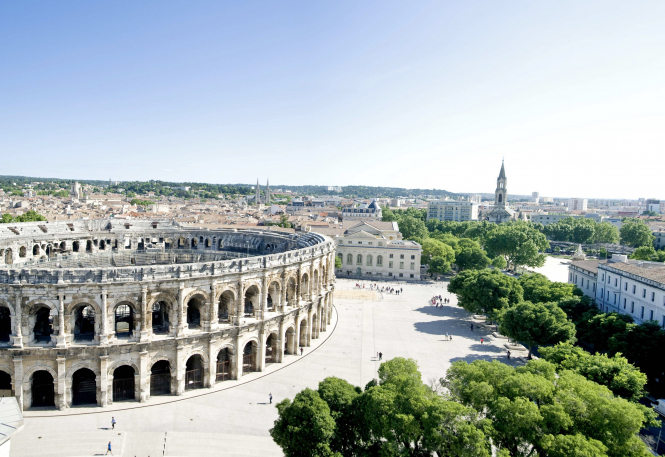 The stunning Roman arena in Nîmes
By Samantha David

France is so big, it is tempting to think that driving at top speed along its motorways is the only way to get around. But that is missing the point; the hexagon is packed with smaller cities which will probably never be your destination but which are just begging for a detour and will reward you richly for having taken the path less trodden.

In fact, from unknown seaside resorts to spectacular museums, historic city centres, cathedrals and quirky shopping, the best way to explore France is to turn every motorway dash into a meandering road trip.

Instead of wondering how fast you can get there, plan your journey to take in as many sites and sights as you can. And if it lasts forever, what’s not to like? Here are a few suggestions to get you started.

If heading to Spain or Biarritz, stop off in Bayonne, Pyrénées-Atlantiques, famous for its chocolate-making and ham, amongst other things. The foire au jambon (April 13–16) is a particularly good date for ham fans, but actually outside those dates is better if you want to stroll round the fishing port, admire the dark red shutters and half timbering, wander the cobblestone streets of the old town, and find a ‘bodega’ where you can try ‘pintxos’ – delicious tapas.

Stop off in Besançon, Doubs on the way to Switzerland, Luxembourg or Germany. Often overlooked in favour of Dijon, even in high summer, Besançon is un-touristy and un-crowded, making it perfect for some stress-free culture-vulture-ing.

The old town, sitting within a tight loop of the Doubs river, is guarded by a stunning military citadel built during the reign of Louis XIV. Fascinating in itself, it also offers breath-taking views.

Afterwards, stroll through the old town and visit the Musée des Beaux Arts; locally known as the ‘Little Louvre’, it is reputed to have the best permanent gallery collection outside Paris.

Do not dash between Brittany and Paris without stopping at Chartres, Eure-et-Loir; the fantastically well-preserved Gothic cathedral (built between 1194 and 1220) is one of the best in Europe. Every year it attracts thousands of pilgrims, who come to venerate the ‘Sancta Camisia’, said to be the tunic worn by the Virgin Mary at the birth of Jesus.

Drink in the beauty and then give the kids a treat: the Odysée water complex is one of the biggest in France with a lazy river running from indoors to outdoors, a 50m Olympic pool, and all kinds of other pools for kids, for splashing, for sliding and even for swimming.

The prices are reasonable and the centre is open all year round.

Stay over if you can, or at least stay for dinner, because Chartres operates a spectacular sound-and-light show at 20 historic monuments in the city every night from April to October.

On the way to St-Malo, take a break in Dinan, Côtes-d’Armor. This medieval town is well-worth a detour. Although it is not on the coast, it has a picture-perfect little port (the river Rance runs north to the sea) surrounded by cafés and restaurants.

Leading away from it is a warren of cobbled streets lined with well-preserved half-timbered buildings, leaning against each other like a crowd of colourful drunks. It is a ‘Ville d’Art et d’Histoire’ so most of these are now shops run by craftspeople and artists, selling everything from engravings to handmade belts.

The whole city is surrounded by 3kms of ramparts, which you can walk round, and do not leave without climbing the Clock Tower. If you can make the 158 steps up the Tour de l’Horloge, on a clear day you can see the Mont-St-Michel.

Right in the middle of France wherever you’re headed, Clermont, Puy-de-Dôme, is often just a milestone on the map, but having the only IKEA for hundreds of kilometres around is not its only charm!

Leave the motorway and you will find a dark and brooding city centre dominated by the Gothic lava-stone Notre-Dame-de-l’Assomption cathedral and the Notre-Dame du Port Basilica.

But that is not all. The birthplace of Audrey Tautou and the headquarters of Michelin tyres holds so many arts festivals (music, film, theatre, visual arts, etc) that it has earned the nickname ‘Little Liverpool’.

The short film festival (February 2-10 2018) attracts bigger audiences than Cannes. If you are into volcanoes, spot the dormant Puy de Dôme, six miles away, by the forest of telecommunications antennae sprouting from the peak.

If you are heading south from Paris, particularly if you are already taking the A77, do not pass up the chance to detour via Gien, Loiret.

The entire city was destroyed by bombs during WWII and has been painstakingly rebuilt to echo the original style, which makes it interesting to look round, but there isn’t much in the way of historical charm apart from the massive chateau which houses a museum about hunting.

But you are not there for history, you’re there to visit the Faïencerie de Gien, established in 1820. It has a museum tracing the history of china which is worth an hour of your time, and of course there is a factory shop where you can buy anything from a soap dish to a full dinner service.

The attraction is that full price Gien china is fabulously expensive, and the factory shop sells slight seconds and end-of-line items at discounted prices.

Whether you are heading west to Montpellier or east to the Camargue, Nîmes, Gard, is a must-see, especially for Roman history fans.

Forget the Colosseum in Rome, the arena in Nîmes is so much better! It has been continuously used to stage sporting and entertainment events since it was built around 3,000 years ago.

If you really want to get into the vibe, the Great Roman Games (April 27-30 April 2018) will feature 500 re-enactors participating in chariot races, hand-to-hand combat, races and equestrian events. This year spotlights Sparticus and the arena will be packed with 24,000 people, making it the nearest you will ever get to entering a time travel machine set to Ancient Rome.

When planning to visit, check ahead as the arena is closed on days of large evening events like Lenny Kravitz playing on July 8. (Avoid May 6 as it is Spanish bullfighting day.) While in town, also see the historic city centre and the Maison Carrée, a spectacular Roman temple.

Instead of thrashing up the A7 from Provence or PACA to Lyon, stop off at Orange, Vaucluse. The grey stone Roman centre with its Unesco-listed monuments is sure to seduce, even in high summer.

Explore the narrow streets and then check out the Musée d’art et d’histoire d’Orange, which is housed in a 17th century mansion and covers everything from antiquity to the 19th century.

Do this before wandering round the Roman Théâtre Antique so that you understand more about what you see. And if you happen to be in town on a Thursday you are in luck as the entire centre is given over to a massive market. Buy olives, cheese, local wines and fruit so that you can picnic in the shade of the pine trees on the Colline St-Eutrope, right beside the Roman theatre.

Rather than race from Paris to Le Havre or Dieppe, stop off at Rouen, Seine-Maritime, where you can trace the footsteps of Jeanne d’Arc via a multi-media presentation at the Historial Jeanne d’Arc museum, and step back into the Middle Ages as you explore the half-timbered streets of ‘Vieux Rouen’. There are several historical monuments and cathedrals to enjoy, as well as the Gros-Horloge, which clock-lovers will want to visit as you can see all the mechanical workings.

The Musée Secq des Tournelles, in an old church, is free and has a fascinating collection of old ironwork including decorative masks, pistols, locks and keys, jewellery, tools and even the original, very first, Swiss Army Knife.

If you are travelling with kids do not miss Les Jardins du Sculpteur Jean-Marc de Pas which are quirky and enchanting.

Any trip that takes you between Bordeaux and La Rochelle is an ideal opportunity to take a trip to Royan, Charente-Maritime; a seaside town just begging for attention with five beaches, a port and a marina. It is out of the way, sleepy, old-fashioned, filled with people who do not want to join the smart set on the Ile-de-Rè.

Along with many other towns on the Atlantic coast, Royan was almost completely obliterated during WWII, and subsequently re-built. The 1950s town centre has its own charm, however, and the austere concrete Notre-Dame de Royan church (built in 1958) is listed as a historic monument. Love it or hate it, you have to admit it is unique.

Check out the covered market (1955) which looks like a giant clam shell; the Palais des Congrès (1957); or the walk from Royan to La Palmyre.

And do not miss the casino....take your passport so you can get in, then have a drink on the terrace overlooking the beach before hitting the slot machines. If you look carefully, you find that some of them only cost 1 centime, so you can feel like a high-roller even on a budget of five euros. Then you can stroll barefoot along the beach in the dark.