Known for being one of the ‘Plus Beaux Villages de France’ because of its impeccably preserved medieval buildings perched atop a steep hill in the Pyrenees, Saint-Bertrandde-Comminges is actually something of a new kid on the block.

Some 2,000 years ago the great Roman general Pompey founded a settlement here on his victorious return from war in Spain. Built both on the rocky outcrop of the current town and on the plain at its foot, the town was populated with prisoners of war Pompey had brought from Spain. Although this deportation was likely a cynical Roman colonising tool, the new inhabitants not only put down roots here, they thrived.

The settlement enjoyed a golden age during the second century, with a forum, baths, a 5000-seat theatre, and a Roman temple. By the early fifth century it ha’ (the future Avignon pope Clement V), ensured the city’s ongoing success by translating (the ecclesiastical term for solemnly moving) Saint Bertrand’s relics in a bejewelled chest to the cathedral.

From then on the steep paths leading to the cathedral thronged with pilgrims, and the minuscule city became an essential stop on the route to Santiago. 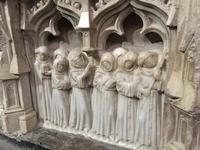 So attractive was the mausoleum of Saint Bertrand to pilgrims by the start of the fourteenth century, that an enclosed choir had to be built for the clergy. The construction allowed the monks to carry out their daily worship – singing the divine office several times daily – without direct interference from the hordes of pilgrims that frequently filled the cathedral’s single-space nave.

Bertrand de Got’s successor, bishop Hugues de Castillon, left his own mark on the cathedral with a sumptuous piece of funerary sculpture, a tomb with his effigy lying above beautifully carved scenes of his own funeral procession, complete with hooded mourners or ‘weepers’.

Jean de Mauléon (bishop from 1523 to 1551) started his episcopacy with a bang by commissioning a lavish new enclosed choir to ensure even greater privacy for the clergy. Carved entirely in wood by Renaissance masters, the choir features exquisite sculpture and marquetry work and is one of the very few wooden choirs of this period to survive in its entirety.

As part of the new choir project, bishop de Mauléon commissioned nine woollen tapestries from Flemish master weavers. The series of tapestries depicted scenes from the life of the Virgin and were originally hung on panels above the high stalls of the choir. Miraculously, two have survived, depicting the Adoration of the Magi, and the Presentation in the Temple. 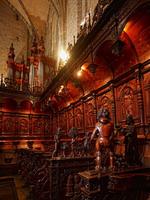 Large tapestries such as these were one of the most luxurious and expensive commodities of the era, affordable only to the very wealthiest individuals. King Henry VIII of England and Cardinal Wolsey both spent small fortunes on tapestries to decorate their palaces. Not only did tapestries look good, they acted as a sound insulator. Perfect for muffling the hubbub of enthusiastic pilgrims moving around Jean de Mauléon’s dazzling new choir.

One of the highlights of a visit to this ‘plus beau village’ is the cathedral cloister, which offers an immersive visual journey through several centuries of sculpture. The Romanesque columns and capitals of the western gallery date back to the twelfth century, while the south and east galleries have a fine display of Gothic sculpture. The north side, abutting the church, was renovated in the fifteenth and sixteenth centuries and contains a variety of ancient sarcophagi.

If you can tear yourself away from the stunning architecture, the south side of the cloister provides breath-taking views of the mountains. In such peaceful surroundings it’s not so difficult to imagine what life must have been like for the medieval monks who once lived and worked here.

1km north of Saint-Bertrand-de-Comminges you will find the Romanesque basilica of Saint-Just de Valcabrère nestled in a tranquil rural setting. The church was built between the eleventh and twelfth centuries and dedicated to Saints Just and Pasteur, two young brothers martyred in Spain during the persecution of Diocletian, and to Saint Etienne, the first Christian martyr.

Make sure you walk all around the basilica and its cemetery to spot a fourth-century funerary stone with its original inscription – a remarkable cultural artefact that has survived nearly two millennia.