‘Titanic of the Mountains’ to restore Spain rail link 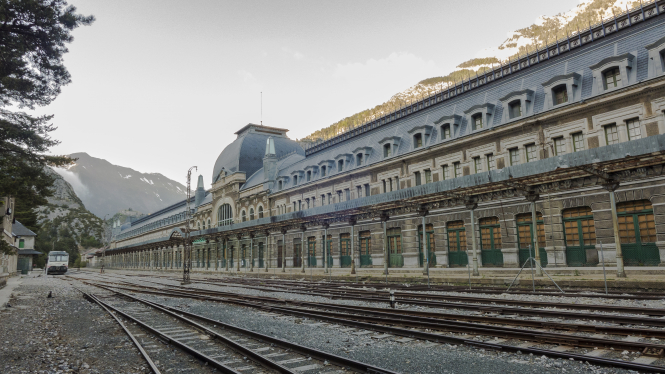 LEFT to rot for nearly half a century, the Canfranc International railway station, on the France-Spain border, is to get a new life with plans to reopen the line that links Pau and Zaragossa and open the beautiful Pyrénées valleys to new tourists.

Nouvelle-Aquitaine regional council and the Aragon region in Spain have agreed a regeneration plan for the route and the giant station nicknamed the Titanic of the Moun­tains, with its 365 windows, more than 150 doors, and 200m-plus platforms.

Sitting at 1,190m and in the midst of Pyrenean peaks, it opened in 1928 and contains a hotel, restaurant, hospital and living quarters for a host of staff.

Built to welcome thousands of visitors and through passengers, it hit an early snag: the crucial detail that French and European trains run on a standard gauge 1.435m track, while Spain’s is a wider 1.672m.

Different width train tracks meant cross-border passengers had to change trains at Canfranc, meaning a long wait, and while the hotel had been built to make it a suitable stopping point, the tracks made the border crossing impracticable for freight.

By the 1930s and despite inventing a spreader to change gauge, only 50 passengers a day were passing through what was Europe’s second largest train station after Leipzig, with a platform that was 241m long.

As the station fell into disuse, its 7.8km Somport tunnel under the Pyrénées became an escape route for republicans escaping Franco’s Spain and then for Jews and Allied soldiers fleeing Nazi France.

But it was also a key supply line for the Nazis to get Spanish tungsten to make steel ... and for the Germans to transport out about 100 tons of gold, worth about €1.2billion today.
Today part of the Somport tunnel is used by Spanish researchers from the nuclear physics laboratory in Zaragossa to research dark matter and neutrinos and the modern road tunnel runs parallel to the old railway.

Now the two regional councils plan a Pyrenean tourist destination on what was one of the original pilgrim routes to Santiago de Compostela from Arles and, by reopening what was one of the four Franco-Spanish rail links, taking a possible one and a half million tonnes of freight transport off the roads in the western Pyrénées which have a high accident rate.

As a tourist destination, Fernando Ram­irez de Dampierre’s grandiose station building is an architectural wonder, with ceilings three-storeys high, marble staircases, faïence tiles like the Paris Métro ... it is a glass and iron monument. The line itself is also an engineering marvel, with more than 80 bridges, four viaducts and 24 tunnels carving a route through the mountains, one even corkscrewing up inside the solid rock at Sayerce to ease the climb.

Visitors can see inside part of the Spanish side of the station as the local tourist office organises visits but all visitors must wear hard hats due to the fragile ceilings.

Ownership of the station was originally shared between Spain and France and while most of its platforms were in Spain one was technically in France and there was even a French customs post and school for the French officers’ children.

But it was France which halted international trains after an accident destroyed a bridge at Estanguet – a loaded grain train rolled back on ice and sped down the hillside until it came off the tracks at 280kph.

That accident and the corkscrew tunnel reveals another problem with the line – it has the steepest slope of any French rail route, rising 43mm every one metre along a 7km section. It is also single track.

After moves to reopen it from both sides of the border, it took a step forward when Aragon region bought the station in 2013 and began refurbishing it as a hotel, with a new, smaller station.

Then Aquitaine region contracted SNCF to rebuild 25km of line from Oloron to Bedous, which reopened in July 2016, and it has now secured European funding under the Interconnexion scheme to look at renovations on the 33km of tracks towards Somport and Canfranc.

This project will start in 2021, while the Spanish side will rebuild 90km of track to widen the gauge to the standard.

Nouvelle Aquitaine president Alain Rousset is a keen backer of the line and says that reopening the Pau-Canfranc-Huesca link is a “priority of the two regional governments”.
However, the plans are under attack from an association of residents, CROC, which says the line can never be fin­ancially viable and that only 250 people use the new Bedous link each day.

Nouvelle Aquitaine replies by pointing to grain being transported from Béarn and Landes to Spain while cars come in the other direction.

The region says that to allow through trains from Pau to Zaragossa the entire line needs to be brought up to modern standards, including increasing the track width on the Spanish side and installing electric cabling for European electric trains.

It wants to turn the white elephant into a tourist and travel hub by 2020 that will see 500,000 passengers and 1.5million tonnes of freight heading up the Vallée d’Aspe on the 4hr 45min journey from Pau to Zaragossa.