Ups and downs of historic Gothic giant in Beauvais 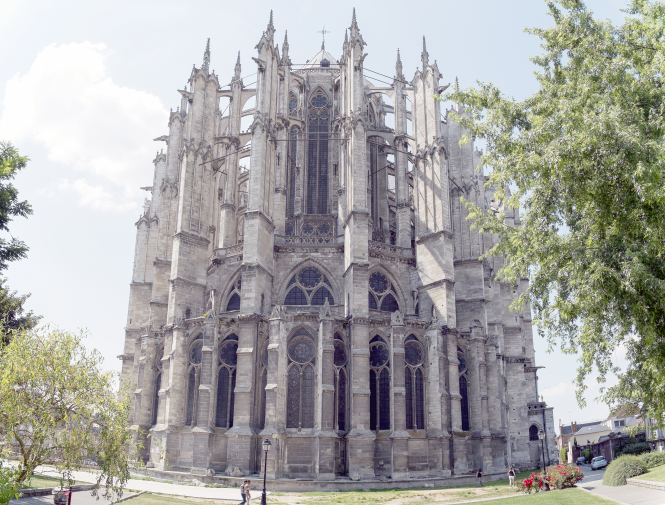 An example of man’s vaulting ambition and his limitations, the Cathédrale Saint-Pierre de Beauvais in Oise is remarkable both for having the highest choir in Europe and for remaining incomplete after nearly eight centuries of work.

Its story began in 1225, when Count-Bishop Milo of Nanteuil decided to use family money to rebuild Notre Dame de la Basse-Œuvre in Beauvais. Its wooden frame had suffered from repeated fires, and the church had been reconsecrated just three years earlier after the latest one.

From the outset the new stone cathedral was a grand project, as is attested by its foundations, which stand ten metres deep in some places. Work was initially rapid. Its choir was completed in two phases, between which Bishop Guillaume de Grez added an additional 4.9 metres to the height, taking the vaulted roof to its record-breaking 48.5 metres. The work was completed on October 3 1272 and services began immediately.

It was 150 years before work began on a transept, at the instigation of Bishop Louis de Villiers de l’Isle-Adam, and under the direction of architect Martin Chambiges. When it was completed in 1548, authorities faced a decision about whether to build a tower or a nave, and they opted for the former. The resulting spire, built over seven years in the period leading up to 1569, stood at 153 metres tall, surpassing even the Basilica of St Peter in Rome to become the highest tower in Christendom.

Each of these colossal achievements was followed swiftly by structural collapse. In 1284, some of the vaulting in the choir fell in. Its construction had taken place during a period when French stone masons competed with one another in ever more breathtaking feats of engineering. The Beauvais cathedral choir had been riskily built with unusually slender buttressing despite its great height. Its subsequent collapse is believed by many to have contributed to a collective failure of nerve amongst the masons. When it was rebuilt, which took until 1347, it was with additional columns.

Then, just after a service on 30 April, 1573, the four-year old spire and three levels of bell tower collapsed. Fortunately the sanctuary had already been evacuated, ensuring that only two people suffered minor injuries.

Construction of the nave finally began in 1600, but, for reasons that are unclear, only ever got as far as the first arch, and so the original church of Notre Dame de la Basse-Œuvre remains standing on the place where the nave was to have been built. This adds to its charm and originality, but undermines its structural integrity.

During the 1990s, the choir had become so fragile that some of its pillars were found to have moved by as much as 30cm. Trusses were installed as a matter of urgency, and soon after, the outside was enfolded in scaffolding.

Despite its delicate frame, the cathedral retains a majestic beauty, its allure enhanced by stained glass windows designed in the 12th, 14th and 15th centuries, the most beautiful of which is by Engrand Le Prince, who was a native of the city. Many of them escaped unscathed having been hidden away during the bombing of the Second World War.

The cathedral’s statues were not so fortunate, many of them having been decapitated by the sans-culottes during the Revolution. It is perhaps this combination of ambition and catastrophe that constitutes its allure.