Holidaying with the stars 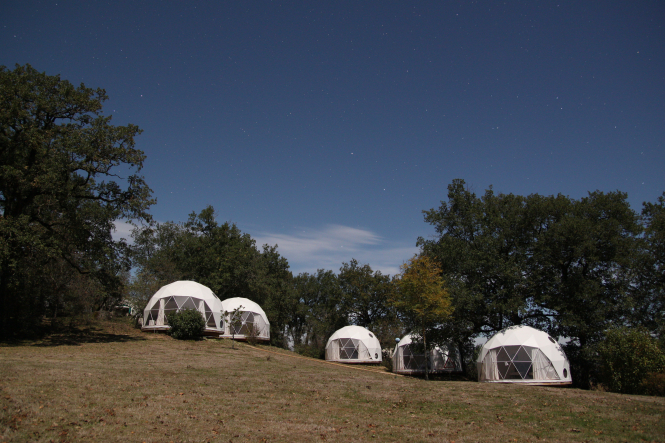 France’s rolling countryside offers many fine views but the most spectacular of them all only appears after dark. Away from the bright lights of big cities, it is possible to step into the garden on any cloudless night and survey a tapestry of twinkling stars set against the inky blackness of space.

The great thing about star-gazing is that you do not have to make any special preparations. Simply stand still for a few minutes, let your eyes grow accustomed to the lower light level and watch the night sky slowly open up its treasures.

If you wish, star charts, apps and websites can provide useful navigational tools to help you sort your Ursa Minors from Orions, while a pair of binoculars will make things clearer still.

However, it is far easier to understand what is going on in the night sky if you have someone experienced to show you around. And celestial guides don’t come better than those at the Ferme des Etoiles holiday centre in deepest Gascony, a go-to region for armies of amateur star-gazers who are lured by the generally good weather and low light pollution.

Based near Fleurance in the Gers department, Ferme des Etoiles stands alone on a ridge looking south to the Pyrénées and has made big business out of all these budding Brian Coxes. It comprises a traditional farmhouse set within four hectares of parkland and offers activities, holidays and training courses all geared around the what-can-be-intimidating topics of astronomy and aeronautics.

To make the sky above us accessible and understandable. “We aspire to use the science of the universe as a tool for awakening and reflection,” its website reads, “allowing everyone to form their own opinion of the world and the great questions of our time.”

Ferme des Etoiles is a beautiful place between sunrise and sunset, but naturally comes into its own under the cover of darkness when all attention turns skywards. More than 3,000 stars are visible to the naked eye from here, and visitors are primed for the pitch black by watching a projection of the forthcoming night in one of the few private planetariums in France.

The space seats up to 40 people and is named after the popular French Canadian astrophysicist Hubert Reeves. It opened in 2013 and offers a total immersion experience, allowing the audience a glimpse not just of the skies of southern France, but as far afield as those above Rio and the North Pole too.

Base knowledge covered, it’s then time to gather on a sloping lawn to watch the daylight disappear. A knowledgeable guide (English speaking) is on hand with a laser torch to point out everything from the astronomical obvious to more obscure secrets of the Milky Way.

What’s more, everyone gets a chance to peer at the Andromeda galaxy through the largest pair of binoculars in France, before climbing a step ladder to look through the lens of a 620mm telescope trained still deeper into space.

Be warned: all that stargazing can seriously mess with your mind! For a start, the ordinary ways of measuring distance no longer apply. There are so many kilometres between the stars that you soon run out of noughts. If there are any other inhabited planets, I learn, it will take us 40,000 Earth years to reach the nearest of them at the fastest speed of which we are currently capable.

For this reason, stargazing can be described as a form of time travel. What we see through our telescope is old light; light that left its source millions of years ago. That twinkling star may not even exist any more.

That’s why astronomy, says Bruno Monflier, a guide at the farm, necessarily covers far more than scientific observation. “It is a response to the famous great questions: Who am I? Where do I come from? Where am I going? It explains how the universe was formed, how we were made and how we are connected to the stars.”

There’s opportunity to ponder these deeper philosophical questions still further over dinner (Ferme des Etoiles has a restaurant specialising in hearty local cuisine) or from the comfort of your own bed later. Up to 15 people can be accommodated in guest rooms in the old farmhouse, but it’s the igloo-like astrobulles in the garden that prove the real overnight draw here – rigid tents of tubular white steel, covered with taut plastic and fitted with round porthole windows.

Dotted around the park, these curious, hemispherical structures wouldn’t look out of place on the set of a Hollywood sci-fi flick. Aesthetics aside, they complement the space theme by letting exhausted astronomers hit the sack without eschewing the heavens: lie back and you can still enjoy the light show. Now that’s what I call a room with a view.

La Ferme des Etoiles is open from April through to November but you will have to take your chance with the weather; you cannot cancel or postpone your visit at the last minute if clouds obscure the sky.

Meanwhile, the Festival d’Astronomie de Fleurance takes place annually in August and includes a “science marathon”: 12 lectures back-to-back over 12 hours. Truly, not for the faint-hearted (or the less-than-fluent in French…).

Can’t make it to the Ferme des Etoiles? Fear not, France is full of other great attractions from which to explore the glories of our galaxy:

Discover the history of space exploration, in Toulouse’s popular interactive exhibition centre. Highlights include full-scale models of the Ariane 5 rocket.

Kids will love this theme park approach to all things inter-planetary, based near Poitiers. Space-related rides and exhibitions sit alongside a planetarium.

Founded in 1667, this is the largest astronomy centre in France with 30% of all French astronomers working in its five laboratories and institute.

Astrofarm in Charente is an adult-only astronomy centre boasting a fully equipped observatory and B&B accommodation. The courses and holidays cater for everyone from complete beginners to space whizzes.