American in France goes with the grain 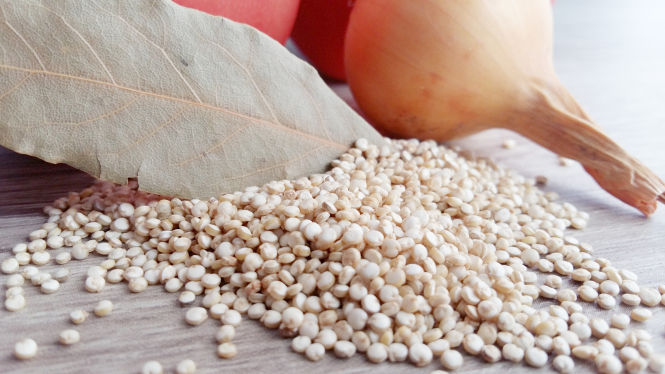 The quinoa grain, originally from South America, is being grown in France, thanks to an American who lives in the Anjou region.

It is highly likely that if you have bought a packet from the supermarket, it will contain home grown grains as around 20% of quinoa bought in France comes from French fields, though this is rarely marked on the packaging.

It is grown by 300 farmers in the Anjou region in Maine-et-Loire and was introduced as a local crop by Jason Abbott who came to live in France in 2004. He had been working as an economist, specialising in seed markets for the USA Ministry of Agriculture and became fascinated by the idea of crop improvement by seed selection.

He came to France to work in a seed company and eventually set up his own business, Abbottagra, researching new crop varieties.

His daughter has celiac disease and so quinoa, which is gluten free, became one crop he was interested in: “We grow an awful lot of wheat in France, which is increasingly resistant to herbicides and pesticides – which makes them less effective against disease and pests.

“Variety of crops keeps the land healthy, and there is no doubt that this is what we need in the future to reduce use of chemicals.”

He says he does not want to block markets in South America and he is not so much motivated by keeping down air miles, but wants to take care of farming in France: “My feeling is we live in France, so let’s take care of France which has a serious problem: too much wheat.”

However, introducing a plant which grows at altitudes of 3-4,000 metres near the equator in a cool, dry climate is remarkably complex: “In France it is either dry and hot, near the Mediterranean or cool and humid in Normandy. Anjou is the nearest we can get to the right climate conditions, but even so we have had to do a lot of work to create strains which will grow well here.”

Wageningen University in the Netherlands had been working on the subject since the 80’s but not many people were interested in their research: “But, I was,” says Mr Abbott, “and I worked with them to start growing crops in France. We do not use genetic modification, because it is not necessary. We do the same thing farmers have been doing for thousands of years. Cross-fertilising different varieties, finding the best results, cross-fertilising them again, and so on.

“There is still a lot more work to be done to produce strains that can grow in other parts of France and Europe and plants that are easier to harvest.”

Mr Abbott has an experimental farm in Anjou to try out new varieties. Quinoa d’Anjou is not registered organic, but no chemical products are used.

Farmers have had to learn about this new crop to make it grow well. For example, they have to judge the right time to harvest and there is a very small window of opportunity between too early, and too late.

Quinoa is not a cereal in botanic terms as it is not a variety of grass but a member of the amaranth family, related to spinach, however, like wheat or maize, the part that you eat is the seed. But the seeds are tiny and difficult to get at. Mr Abbott estimates they leave 40% behind in a field, and that needs working on.

Each plant produces around 10,000 seeds, which weigh 30 grams, meaning you need over 30 plants for 1 kilo of quinoa. “We are trying to grow varieties that we can harvest in the same way as wheat, as those are the machines that farmers have.”

What we buy in the shops is the untreated seed, which has been separated from the rest of the plant and washed. It is undisputedly healthy. It is higher in proteins than rice and wheat and is one of the only plants that contains all the essential amino acids, and so can replace animal proteins if eaten in enough quantity.

Being gluten free, it is easy to digest. It contains high quantities of iron (6mg/100g compared to 3.3mg/100g for lentils and 2mg/100g for wholegrain rice) more magnesium than wholegrain rice, twice as much calcium as most cereals and vitamins B1 and B2. And it has a high fibre content.

However, it does not taste of much:

“The fact that it is boring is a good thing,” says Mr Abbott. “Like plain bread or potatoes it can be added to a sauce or a dish or you can add oil and salt and pepper to it on your plate. Its neutrality is an advantage, because it makes it flexible.

“Also it is easy to cook, you just boil it in some water and you don’t have to create new recipes to use it, you just use it as an alternative to another grain like rice. Chia is another new ingredient
from South America, but nobody knows quite how to use it, whereas it is easy with quinoa.”

He says it is becoming more and more popular: “I arrived with my idea just at the right time. Others had tried before, but consumers were not ready. The figures show that in 2016, 6,000 tonnes were bought in France but I would say that for 2018 it was nearer 10,000 tonnes. We consistently produce around 2,000 tonnes here but imports from South America have increased.”

Quinoa d’Anjou is sold mostly to industrial companies who package it and sell it at a price which remains stable, unlike the overseas prices which fluctuate. This means that sometimes French quinoa is more expensive, and at other times it is cheaper.

Quinoa crops depend on the weather, of course, and the high temperatures in early summer over the past two years have not been helpful. However, Mr Abbott says they can always sell 2,000 tonnes a year, because it keeps well and they have reserves and their crops are in small parcels spread out over several farms, so there are always areas that do well. He is confident for the future of French quinoa:

“You wouldn’t believe the work that goes into growing and developing quinoa here but it is worth it. People are eating more and more diverse crops and want to buy locally and are beginning to renew a certain contact with the agricultural world which is fun for everybody.”