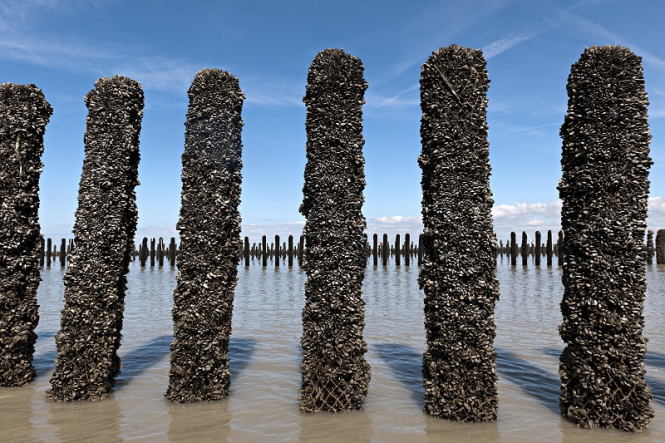 Poles on which moules de bouchot grow can be up to 3.5m high
By Jane Hanks

Mussels are an iconic French food, symbolised by the classic moules marinières and the popular moules-frites, famously on the menu at the biggest flea market in Europe, the Braderie de Lille at the beginning of September.

Here it is the tradition for each restaurant to try for the highest pile of empty mussel shells on the pavement outside their premises.

Around 65,000 tonnes are produced in France each year, and they are found all around the French coastline. The two main species are Mytilus edulis or common mussel and Mytilus galloprovincialis, which is bigger than the common mussel and is also called the Mediterranean mussel.

The most common method of farming mussels, particularly in Normandy, Brittany, Pays de la Loire, Poitou-Charentes and Arcachon is to attach them to ropes strung from wooden poles, when they are called moules de bouchot.

Legend has it that it was an Irish traveller, Patrick Walton who invented the pole method by accident in 1235. After being shipwrecked in the Baie de l’Aiguillon, on the West coast, he had to earn his living and so put up a net between two poles to capture sea birds.

He noticed that mussels began to cluster on the poles, so he increased the number of poles, and so the number of mussels and found it more profitable to sell the shellfish than birds. It is thought the name bouchot comes from the Irish language.

Some of the most prized moules de bouchot come from the Mont-Saint-Michel Bay and they are the only ones to have the Appellation d’Origine Protégée (AOP) label. They make up 20% of moules de bouchot in France.

Mytilus edulis were first cultivated in the bay in 1954, when the local mayor André Busson and his adjoint, Alexis Hodbert, decided to authorise a few lines of poles as an experiment which was due to last three years.

Their results were mediocre but they decided to continue. At the same time mussel producers in the Charente were facing huge losses as many of their mussels were dying and so they were happy to move to Brittany and bring their expertise with them.

In 2006 they were awarded the French Appellation d’origine controlée (AOC) label and in 2011 the European AOP label.

There are now 44 businesses and 248km of poles, which is the maximum allowed for environmental reasons.

Nicolas Lebeau is in the third generation of his family to have worked as a mytiliculteur in the Mont-Saint-Michel Bay. His grandfather came there from the Charente. He says it is an area particularly well suited to mussels:

“It has the longest tide in Europe with a difference of 16metres between high and low tide. It means we have a very large area in which to place our poles.”

The mussels spend much of their time out of the water: “This makes the mussel work as it has to open when it is underwater, and close when it is in the air.

This, together with the quality of the water, which comes off the land from surrounding marshes and rivers and from the sea, gives us a flesh which is highly coloured and plump. Just as the taste and texture of a wine depends on its particular terroir, the flavour of a mussel depends on which part of the coast it comes from.”

The moules de bouchot de la Baie du Mont-Saint-Michel are particularly prized for their strong, bright yellow to orange colour, a flesh which fills the shell, and for their distinctive smoothness of taste with a hint of sweetness.

Marine mussels reproduce by releasing their eggs and sperm into the water. The young begin life as floating larvae and from April to May, these gather on ropes made from natural fibres which are hung from horizontal supports.

The water in the Channel is not warm enough for this process, so the mussels in the Baie du Mont-Saint-Michel start life in the Atlantic off the coast of the Charente-Maritime from where Mr Lebeau buys hundreds of metres of cord with the baby shellfish already attached, to coil, by hand, round his poles from June to September.

Each one carries 5m of cord and each pole can give between 45 and 130 kilos of mussel, depending on a wide ranging number of factors, such as weather.

The mussels are left to mature for a minimum of eleven months, and the first ones are usually harvested the following July. The season continues until February.

Whilst the mussels are developing they have to be constantly watched over: “We have to net them, to make sure they don’t fall off or get eaten by predators.” Crabs like to get their pincers on them, but the most difficult to control are the increasing numbers of Common Scoters, a large sea duck called Macreuse noire in French, which is migratory, but beginning to spend more and more time in this area, with such a tempting food supply: “We are in a Natura 2000 zone and so we cannot shoot them and the only way to chase them away is by flying over the area with a microlight, because the noise frightens them away.”

However, Mr Lebeau says they have very few problems with disease, as the most common ones only develop when the mussel is two years old, and theirs are sold by then.

At the beginning of July, tests begin to see if the mussels are ready to be eaten. Once the season is declared open they are harvested in special amphibious boats which can move on water and on land and have a hydraulic arm which takes all the mussels off one pole at the same time.

“We were the first to develop these kind of boats, which are particularly useful for us because of the big tides,” says Mr Lebeau. “We also work with conventional boats and tractors.”

Once harvested the shellfish are then separated and washed by hand and the filaments on the shell are removed. They are sold all over France and the world.

“We have the advantage that Mont-Saint-Michel is known worldwide and together with the quality of our mussels, it means we have a lot of demand from top restaurants and countries as far away as China and Hong Kong.”

Nicolas Lebeau says it is a job he loves. “We are outside nearly all the time. We work in the sea and with the elements, so conditions can be harsh, but I much prefer it to being inside in an office.”