'Vegetables? No charcuterie? That's not a raclette!' 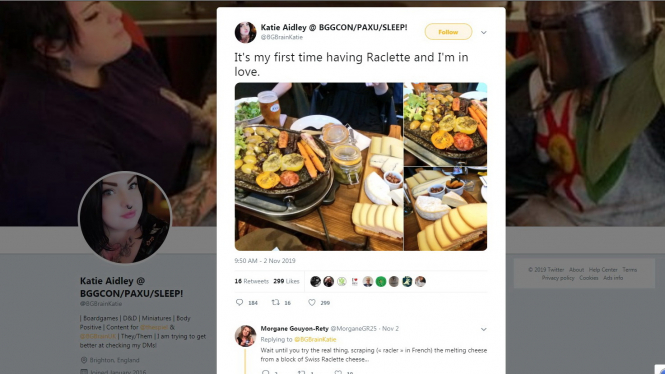 “My first time having raclette, and I’m in love,” posted Katie Aidley from Brighton.

It's my first time having Raclette and I'm in love. pic.twitter.com/3xuOdnRJYW

“Sorry, but it’s not at all a raclette”, responded Twitter user Sophie de Ravinel, adding shocked and laughing-to-tears smileys to her post.

“What’s up with all these vegetables? Where is the charcuturie?,” demanded Charlotte Picard, while another user, Fizzle, said: “Eh? There are dried apricots and and prunes, it’s a maroclette, I think.”

“…what she shows is not a real raclette because there is camembert and fruits and vegetables which is kind of weird,” OnePlayer21 opined, while 30-Something from Alsace said “the only vegetables allowed in a raclette are pickles”.

Others took to posting their own ‘first versions’ of food:

My first tartiflette. Love it. pic.twitter.com/PdhNkUODb5

My first choucroute and il love it so much pic.twitter.com/Gjprw28w2F

My first fish and chips pic.twitter.com/KHQpKFgLUs

The photos Katie posted show raclette cheese but also what looks like morbier and reblochon (identified by some users as camembert), whereas the traditional meal involves only raclette cheese.

However it turns out that the version with charcuterie that is popular in France is a relatively recent invention and the original dish, which comes from the Valais area of Switzerland just involved raclette cheese, boiled potatoes – and picked vegetables, according to the Association Patrimoine Culinaire Suisse, a group of experts in Swiss terroir products.

The Swiss site clarifies that the cheese should be called le raclette while the dish is la raclette (however in France both are often referred to in the feminine).

The name raclette comes from racler, to scrape. Originally big half wheels of cheese would be melted before an open wood fire and the molten cheese scraped off with a knife.