Cattle class to Vendée via Aberdeen 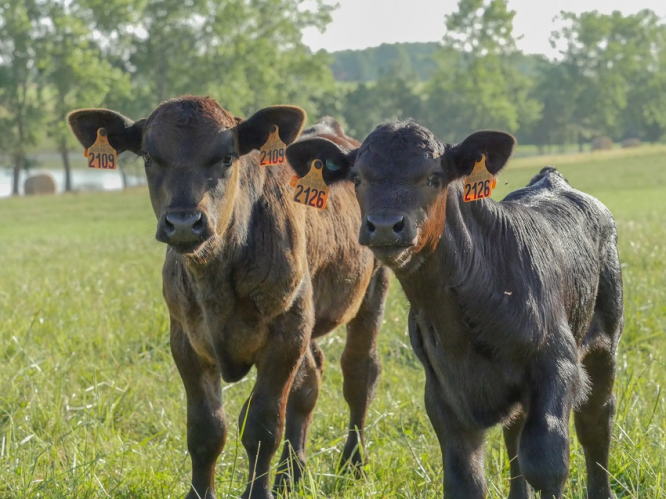 Easy to rear and tasty to eat, la French Angus cattle breed is on the rise
By Jane Hanks

Aberdeen-Angus is known the world over as the finest beef cattle, but it has only recently been introduced into France and it is estimated that there are now between 2,500 and 3,000 of this prized breed in the country.

That is a tiny proportion of the 19 million dairy and beef cattle raised every year in France, but according to a group of farmers in the Vendée who have introduced Aberdeen-Angus onto their farms, it shows the beginnings of a new way of producing beef, where quality wins over quantity.

Cavac is the Vendée agricultural co-operative which first introduced the breed into the area in 2009 and now has 45 farms with 2,000 Aberdeen Angus. The aim is to produce a top quality meat from animals which are born, raised and killed locally, fed mostly on grass and cereals produced by the farmer, without soya, maize or palm oil.

The co-op believes that this is the type of beef consumers are increasingly looking for as we are advised to eat less meat. It may cost more, but tastes better and the person who is eating it knows that the animal has been well looked after, knows what it has been given to eat and can be confident it has not been driven more than a maximum of 100km to the abattoir.

One of the farms in the scheme belongs to Jean-Luc and Régine Caquineau, at Benet in the Marais Poitevin.

They have around 250 cows in total – 40 Aberdeen Angus, 105 Limousin and 105 Blonde d’Aquitaine. The calves are born on their farm and when they are eight months old they are sent to other farms in areas with the best pasture land to be fattened.

Mr Caquineau says there are many reasons why he chose to join the scheme:

“I ate Angus beef in top restaurants and was amazed by the quality of this meat and thought we should be able to produce this type of meat in France. For me, eating it is the equivalent of drinking a Grand Cru from Bordeaux. The meat is good because it is marbled, tender and full of flavour.”

He also says they are a pleasure to have on the farm: “They are small, black, without horns and docile. My wife works with them more than me and she says they are easy to handle and having them has brought back the pleasure for her in raising cattle.

“All the farmers appreciate this new breed of cow in France. Another advantage is that they are hardy and so they can stay outside in the fields.”

The Aberdeen-Angus breed was developed in the early part of the 19th century from the predominantly black cattle of north east Scotland, known locally as “doddies” and “hummlies”.

Three men were responsible for what is now regarded as the greatest beef in the world. They were Hugh Watson in Angus from as early as 1808, William McCombie in Aberdeenshire from 1824 and Sir George Macpherson-Grant at Ballindalloch who spent 50 years refining the breed.

It is now raised and appreciated the world over, particularly in the UK, Argentina, Australia, Canada and the United States.

In the Vendée, Cavac has registered a new brand for this beef, la French Angus.

To comply there are strict specifications including the well-being of the animals, which must spend a minimum of 75% of their life out in the fields; 90% of their food must be grass based, guaranteed non GMO with a linseed supplement.

They have to be born, raised and slaughtered in the Pays-de-la-Loire, so it remains local. There is also a guaranteed price for the farmer which is not affected by market fluctuations at point of sale.

The majority of the meat is used for high quality burgers and they have been sold in Carrefour supermarkets since June last year.

Mr Caquineau recognises that this will remain a niche market, but says consumers no longer have to depend on imports to enjoy the best beef. At present he only has a few Aberdeen Angus, but is more than happy to expand that number as the product becomes better known and more people buy French Angus.

Perhaps the Aberdeen-Angus is only a recent addition because France is well known for having more cattle than any other country in Europe, and the highest number of different breeds, which are extremely varied. There are 24, 11 of which are for meat, three for milk and 10 which are good for both milk and meat.

France is the top producer of meat breeds in Europe, which all have regional characteristics and they are Charolaise, Limousine, Blonde D’Aquitaine, Rouge des Prés, Salers, Gasconne, Aubrac, Parthenaise, Bazadaise, Blanc Bleu and Raço di Biòu.

The seven best known are described below:

Charolaise are cream coloured and came originally from Saône-et-Loire (Bourgogne-Franche-Comté) and are the most common in France. They produce big carcasses with lean meat which is very much appreciated by butchers.

The second most common is the Limousine breed which is brown in colour. It is a hardy breed coming from the Limousin region to the west of the Massif Central.

The Blonde d’Aquitaine (pictured above) is characterised by its rapid growth, size and low fat levels. It comes from the south-west and is a cross between three breeds from the Aquitaine: the Garonnaise, the Quercy and the Blonde des Pyrénées.

The race Rouge des Prés is brown and white, comes from the Loire and has a red and compact meat.

The Aubrac is medium sized, hardy, grey, with long horns and comes from the Massif Central. It is left to roam the plains of Aubrac from May to October.

The Gasconne  is silver grey with horns and becomes lighter in the summer and darker in the winter to adapt better to sunlight. It lives in the west and central Pyrenees and moves from the plains up into the mountains during the May transhumance.

The Salers takes its name from a town in the Cantal, Auvergne. It is large, robust and hardy and has a ruddy brown coat which is different from other breeds because it is long and curly. It also has characteristic horns which are wide open and ivory with black tips.

Most meat cattle are found in the Nouvelle-Aquitaine and most dairy cows in Brittany.

As well as having the most cattle, France also eats the most beef with the latest figures for 2016 showing that each person eats an average of 23.7 kg a year compared to an average of 15.4kg for the whole of Europe.

3 days ago
2
Barclaycard stopping cards for residents in France

1 day ago
5
Where is the safest place in France to live?