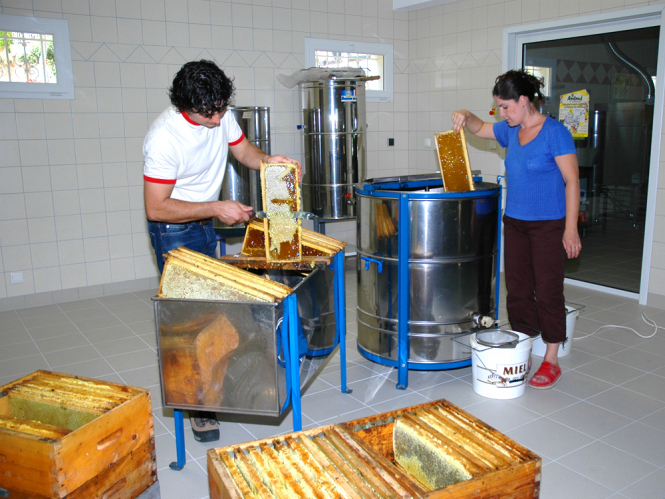 Last year, Lionel and Sandrine Rolland were the only honey producers to win the ‘Prix d’Excellence’
By Connexion journalist

At Apiland, in Rousset, near Aix-en-Provence, Lionel and Sandrine Rolland don’t just produce award-winning honey, they also run a ‘honey museum’; an educational centre where families can learn about bees and how they make honey. (‘Api’ refers to apiculture, the French for beekeeping, and because it sounds like ‘happy’, the name is a cute play on words.)

“I’m fascinated by bees,” says Lionel. “I’m passionate about the natural world anyway, but bees are exceptional. It’s not the same thing as loving a pet like a cat, but I do love them in a way. As well as having a central role in maintaining our biodiversity, they produce so many wonderful things; honey, beeswax and royal jelly. All insects are useful but bees are really unique!”

The family has been beekeepers for three generations. “We prioritise quality, and everything we do is about producing the best,” says Lionel. He’s proud of the awards they have won: the ‘Médaille d’Or’ at the Paris Agriculture Show in 2015, 2016 and 2017.

Last year, they were the only honey producers to win the ‘Prix d’Excellence’.

Lionel says it’s a passion which he loves sharing. They are open to groups (min 20 people) all year round and they also run guided tours which last 2-3 hours. “People bring their children, because it’s fun as well as informative, and then they say they found it fascinating themselves. Adults love our guided tours!”

They do not have enough land for all their hives, which are situated all over the surrounding countryside. “We choose places which are as far removed as possible from human habitations and agriculture so the bees make honey from wild mountain flowers. We produce different kinds of honey each year, depending on where the hives are: Miel de Miellat (Honeydew), des Alpes, de Lavande (lavender), de Tilleul (lime or linden), de Montagne, de Garrigue (Mediterranean scrubland), de Bruyère (Heather), de Châtaignier (Chestnut), de Forêt, and d’Acacia.”

As well as the ‘honey museum’ they also have a restaurant which is open for lunch every day in July and August, and open by reservation to groups throughout the year. They also sell their honey and honey-based cakes and spiced bread in their own shop, and from their website.

Named after the small town in Indre-et-Loire where it is largely made, Sainte-Maure de Touraine is a small, log-shaped unpasteurised goat’s cheese.

With its pale grey rind and ash coating, it enjoys a reputation as one of the top goat’s cheeses in France (it was awarded the prestigious AOC – now AOP – label in 1990).

What makes it recognisable is the straw that runs lengthways through its centre – this is a practical measure for ease of handling and to show the producer’s name.

The classy condiment Fleur de sel is the thin crust hand-collected from the seawater surface as it evaporates and France has several notable salty hotspots, such as Ile de Ré, Guérande and Camargue.

The latter, as harvested by Les Saunier at Aigues-Mortes, is a vital ingredient for Med cuisine and this replenishable glass jar costs €7.95 for 150g from www.bienmanger.com