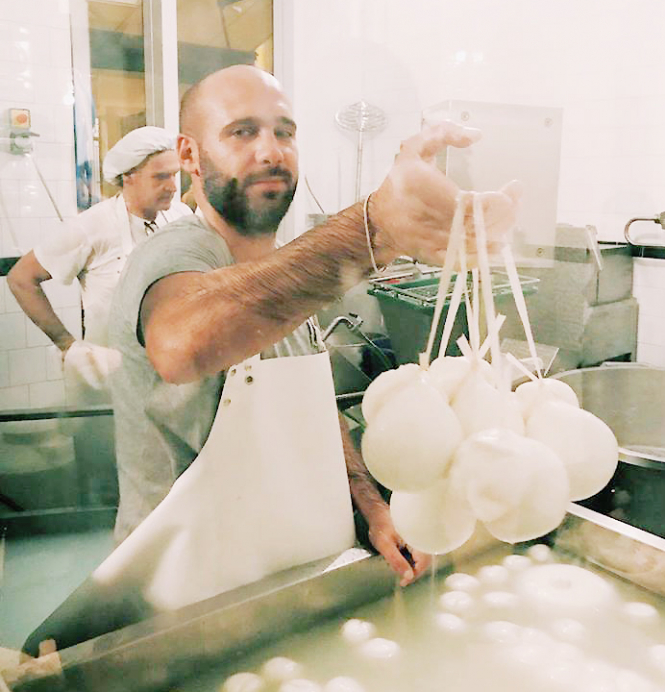 Parisian cheese lovers Julien Carotenuto and Franco Picciuolo could not find good buffalo mozzarella in France, so they make it themselves.

“My grandfather came from Campania, and he wouldn’t eat the stuff they sell in the supermarkets here,” says Julien Carotenuto. “The problem is transport. A couple of hours is ok, but any longer and you have to refrigerate it, and you should never chill mozzarella. It spoils the taste. You should just eat it fresh, within 36-48 hours of it being made. In the shops in Campania, they sell ‘today’s mozzarella’ but you can’t buy that in France, not even in Paris.”

‘Mozzarella di Bufala Campana’ is protected by EU legislation on protected origins, PDO, so can only be made in Campania. But buffalo mozzarella can be made anywhere, as long as you can find buffalo milk of course. “We have a supplier in the Auvergne,” says Julien. “It took time to find them, because we wanted raw milk not pasteurised, but their buffalo milk is top quality.”

It takes five litres of buffalo milk to make a kilo of cheese whereas it takes eight litres of cow’s milk. Buffalo milk is richer than cow’s milk, has a higher percentage of solids and higher levels of fats, minerals and protein. Cow’s milk mozzarella is usually used for cooking, ie pizzas and gratins, rather than buffalo mozzarella which is perfect served with beef tomatoes and fresh basil.

Water buffalo have been used as a draught animal in Italy since at least 10th century, valued for their strength and the size of their hooves, which do not sink too far into mud so they can be used in badly drained terrains. There are references to buffalo cheese being made in Italy as early as the 12th century, but the production of buffalo mozzarella only became widespread in the late 18th century.

Julien Carotenuto and Franco Picciuolo have a cheese shop in Paris’s 11th arrondissement, where they make their mozzarella by hand. “In the beginning, customers were hesitant,” says Julien. “They were used to buying mozza in a plastic package from the chilled cabinet, and we sell it at ambient temperature. But we soon won them over and now they appreciate the taste. It’s best eaten just the way it is, as soon as you get home, with fresh bread.”

Artisan cheese of the month: Vieux-Lille

A close relative of the equally very whiffy Maroilles cow’s milk cheese made in the Nord-Pas de Calais region in North East France, Vieux-Lille is also known as Gris de Lille because of its greyish colour.

Twice salted and rindless, with a slight ammonia smell, its taste is more pronounced, more salty and even a little spicy. It takes up to six months to mature.

Whilst its strong taste is an acquired one, it has wide-reaching appeal – one story goes that Russian premier Nikita Khrushchev loved it so much when visiting the region in 1960, that he ordered a batch to be delivered back to Moscow.

It was traditionally slow-cooked in the village boulanger’s bread oven on a Sunday morning and then collected after the church service.

Available to buy ready to reheat from www.bienmanger.com