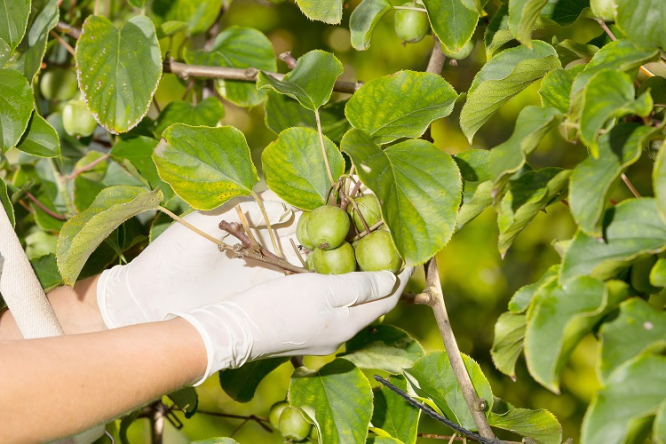 On his fruit farm near Mont-de-Marsan in Landes, François Lafitte grows Nergis – small, smooth-skinned kiwis sometimes called kiwiberries. “They are sweeter than a normal kiwi,” he says, “and the flavour is something between raspberries and kiwi.” He has been growing kiwis since 1979, but planted his first Nergis in 2009, and he now has 24 hectares of Nergi vines.

“I was attracted to it because it was a novelty, and also because it’s a vine, you train it over a tunnel. I chose to grow it because it’s strange, it’s interesting - it’s a little fruit which you can just pop in your mouth like a cherry, so it’s fun. And from the farming point of view, it’s hardy, it doesn’t mind frost, and resists disease very well, so it’s easy to grow without too many chemicals.”

Nergis are, however, labour intensive. The vines have to be pruned, and trained along the supports, the leaves have to be cut away from the fruit, and all this as well as the harvest, has to be done by hand. “It’s a very natural product,” says François Lafitte, “and it’s beginning to be known by the general public. We are stocked by major supermarkets in the big cities. In France we produce 5 million packs of Nergis a year. But around 80%
is exported.”

He says that nearly half the production goes to Germany, where people are quicker to adopt new things, more preoccupied with eating vitamins and more likely to eat a packed lunch. They are also apparently bigger consumers of ‘small fruits’ like cherries, raspberries and other soft fruits. “The French are very traditional when it comes to food, and change their habits much more slowly.”

The Nergi isn’t a new species, it’s a very old fruit which has been known in northern Asia for centuries. But this new generation of nergi vines have been bred to produce more fruit which keeps very very well. “Nergis have a shelf life of up to 2-3 months.”

Nergis can be eaten as a snack, or combined in fruit salads or used to make ‘fruit kebabs’. They can also be used in salads, or served with Palma ham or soft cheeses, making them a very versatile ingredient in the kitchen.

One of France’s oldest known cheeses – it dates back to Roman times – Fourme d’Ambert is a semi-hard, AOP blue cheese made from raw cow’s milk in the Auvergne. Its blue veins come from the Penicillium roqueforti spores with which it is inoculated and while it resembles Roquefort, in texture it is denser and less crumbly and in taste less poky, albeit with an earthy, mushroomy mouthfeel.

To buy in situ, visit the artisan producer la Ferme des Supeyres – closed on Thursdays, the day they head to Ambert market.

This tasty regional dish from the village of La Canourgue in Lozère (Occitanie) resembles other wine-based, braised beef stews but with one key difference – the addition of pigs’ feet to lend extra gelatinous, unctuous silkiness and flavour. Slow-cooked for four hours, la pouteille is best served with boiled potatoes. Available, ready to reheat from www.bienmanger.com, €25.75 for a 900g jar.