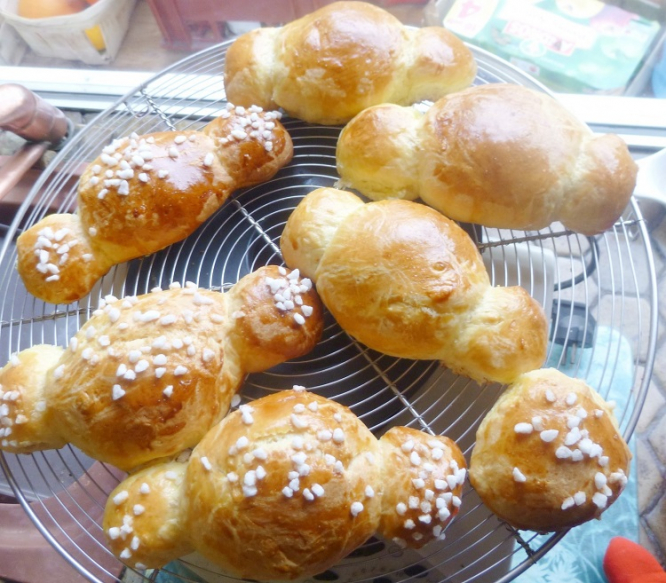 Just as nothing says ‘Easter’ quite like a surfeit of chocolate eggs, few things evoke the miracle birth of baby Jesus quite like a sugar-coated brioche, washed down with a steaming cup of hot chocolate.

Which is why in the north of France, usually from the beginning of December onwards – but as early as St Martin’s Day (11 November) in some places – boulangeries will be serving up their own particular version of  a coquille or a cougnou: a pastry formed into baby shapes and sprinkled with sugar nibs.

Made with flour, eggs, milk, yeast, raisins and sugar, a coquille is popular throughout the low countries, especially Belgium.

The cooking and distribution of the cake is a tasty blend of ritual and symbolism, with some experts believing it even pre-dates Christianity to Jewish Mishna or Saturnalia, the Roman mid-winter festival. Other historians believe that the shape of the baby has over time morphed from the original female adult form.

Later the writer Jacques Thiroux, in his history of Lille published in 1730, wrote about the celebrations that took place in 1579, during which small shell-shaped cakes were thrown to the people below from the city’s huge belfry.

As for its name, there are two possible origins. The word coquille (as used in coquille St Jacques, a scallop) is a diminutive of coque, meaning shell, the shape that this cake originally took.

A second theory is that the word comes from the Flemish and Dutch word kocke, pronounced “couque”, and which means cake.

Special moulds (below) are available in good kitchen shops, should you wish to craft your own baby brioche this festive season. Aim for a golden crust, a yellowish interior and soft crumb.

What do you buy the home cook who has everything? If they want to create the best possible patisserie, then what better gift than a bespoke oval mould for the chocolate glazing on top of their delicious éclairs – after all, it’s the detail that counts.

Made by family-owned firm Matfer Bourgeat, the cutter includes a reinforcement belt to provide greater strength and precision in cutting. Matfer serves the catering trade but products can be found on many websites. €28.60, www.laboetgato.fr

As any self-respecting festive dinner host is aware, offering a selection of post-prandial, fine French chocolates is an easy way to melt the heart of any guest. Provençal confiseur François Doucet is well known for his candied fruits but other offerings are equally appealing. This Ecrin festif (€20 for 250g) includes grape seeds macerated in Marc de Champagne, dressed in marzipan and then coated with chocolate, as well as chocolate hazlenuts and pralines. Joyeux Noël! www.francois-doucet.com