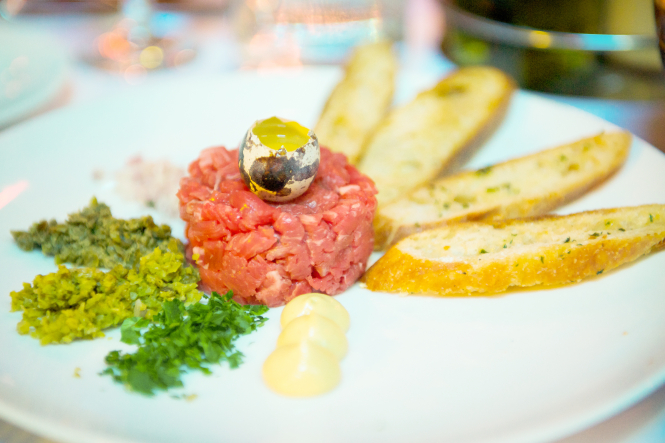 Given the inexorable spread of veganism and vegetarianism (France, perhaps surprisingly, is included in this unstoppable rise), it is likely that one day – perhaps sooner than we all think –  meat-eaters will be in the minority.

And when that comes to pass, one of the off-menu, naughty, morally dubious, seemingly rank, or plain odd-yet-delicious dishes that any self-respecting carnivore might seek out, is steak tartare.

Its concept, with origins in Eastern Europe and later the USA, is certainly wacky, if straightforward. Like a deconstructed hamburger, it is a mix of seasoned and chopped steak with a few flavour-giving trimmings such as capers, Worcestershire sauce and onion mixed in, and topped with a raw egg yolk to be stirred through at the last minute, for added goo and goodness.

When the dish first appeared in the French foodie bible, Escoffier’s Le Guide Culinaire, in 1921 it was called steack à l’Americaine and served sans egg yolk. Its name referred to the tartar sauce (a gherkin mayonnaise) it was served with. By 1938’s edition this had morphed into the dish we know today, but ‘tartar’ stuck.

Some people worry about steak tartare’s associated health risks and while properly kept raw meat is fine, those with weak immunity might want to steer clear. The advice is: if making your own, always try to buy the very freshest, high quality meat.

Be it a moral or animal welfare stance that drives a vegetarian switch, or other environmental concerns about the impact of epic-scale cattle rearing, meat-free living is here to stay. Steak tartare, like the edible, Armagnac-soaked finch ortolan (illegal, of course) and foie gras (clinging to legality but still widely enjoyed in France) will become even dirtier words.

What odds on Paris being home to blacked-out, sidestreet speak-easys for steak tartare aficionados in the year 2070?

Warm the heart with a raclette... by candlelight

In ski chalets across France, weary skiers are tucking into cheesy raclette suppers this winter, to replenish energy levels. But why not give the soirée a modern twist with this stylish, foldable ‘Yeti’ set from Cookut, a Lyon company founded by three young innovators.

It uses tea lights to heat a small tray full of unctuous cheese – wait for it to melt then spoon over your meat and potatoes!

Also available in baby blue and pink. €14.95 per tray from www.cookut.com .

The penchant for craft ales is booming in France (see Trending in our October edition), so much so that Casino supermarkets now have their own ‘cave à bières’ (beer cellar) instore.

The firm has worked with two breweries and a ‘bièrologue’ to launch a range of artisanal beers (€2 for 33cl) called La Collective du Houblon. Featuring hoppy tipples which will be familiar to British beer drinkers, they even have English names, such as Amber Ale, IPA and Golden Ale.